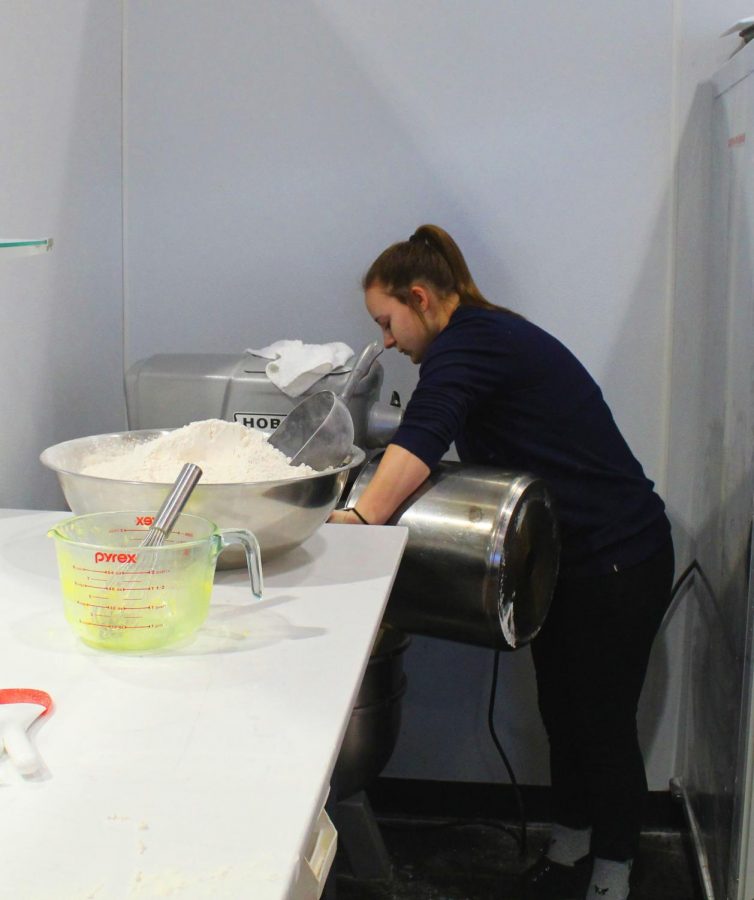 Hanna Lester, who has been working at Dang Good since it opened, wakes up early to prepare the dough each day.

Dang Good Cinnamon Rolls and Waffles opened at The Market in downtown Huntington Monday, Jan. 7. Andrew Hines, the owner of Dang Good, also owns Butter It Up, which is a coffee shop also located in The Market. Hines said he had the idea to open a new business when the space became available a few months ago, and he had another idea of a different business he wanted to put in the space before he came up with Dang Good.

Hanna Lester, a crew worker for Dang Good, said she actually applied at Butter It Up, but Hines informed her of his new adventure of opening a new business. Lester said Hines told her about his idea of opening Dang Good if she wanted to wait and start working at the new business instead of Butter It Up.

“As a worker, I get here at 6:45 a.m. every day,” Lester said. “I prep and make the dough and start making the icing. I also prep for the next day, because we sell so much.”

“My favorite part about working at Dang Good is the fact that people can see you over the counter and watch me make the cinnamon rolls,” said Jumod Jones, another crew member at Dang Good. “It makes me proud of what I do.”

One of Dang Good’s specialties is the cinnamon roll waffle they have. Jones said the waffles are shockingly good, and they are so delicious, it is the best waffle someone will taste.

“I think The Market, in general, is good for the Huntington community, especially a part of Pullman, because it uplifts the entire community and gives people something to do,” Lester said. “You can get healthy food, snacks, ice cream– there is something for everyone here. It is a cool business, because it is a small treat that everyone likes. Everyone likes cinnamon rolls and waffles, and they are dang good.”

The hours of operation of Dang Good are 8 a.m. until 4 p.m. Monday through Sunday. It is located inside The Market at 809 3rd Ave.

Anna Marsh can be contacted at [email protected]