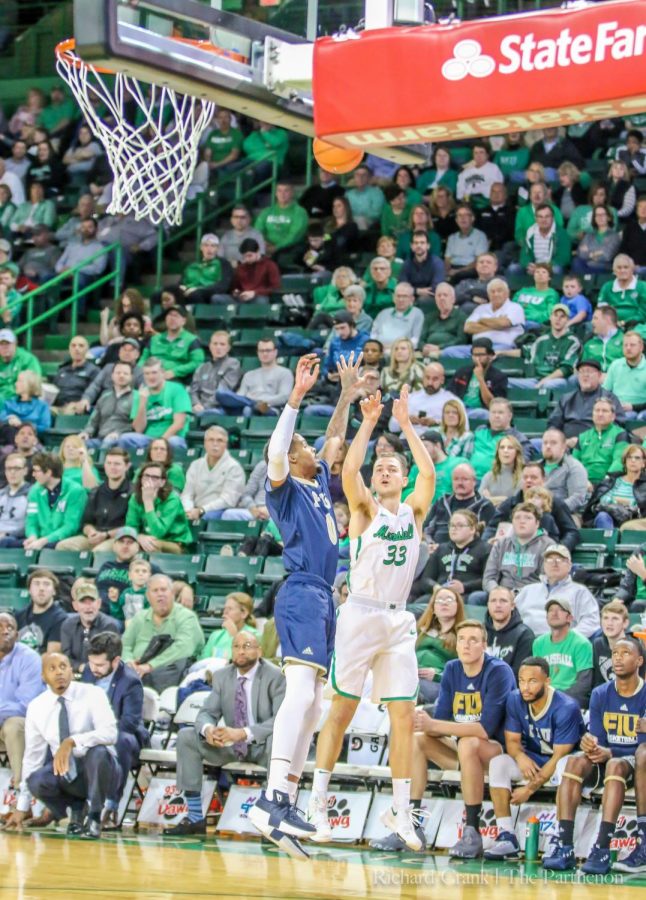 Marshall guard Jon Elmore (33) shoots a 3-pointer around an FIU defender during their matchup in the 2017-18 season. Elmore's shooting from beyond the arc is a staple in Marshall's offense.

“They’re [FIU] still different than last year,” Marshall head coach Dan D’Antoni said. “[It’s a] much faster pace. I think we’re tough. [The game] should be like our state: wild and wonderful.”

Senior guard C.J. Burks boosted the Herd on Thursday by adding 30 points while shooting 57 percent (8-of-14) in total shots. Senior guard Jon Elmore contributed to the Herd’s success with 29 points.

“We’re fired up and moving forward,” Elmore said. “You can’t dwell on the past. We go in every game 0-0 and got to take it one game at a time.”

It was the Burks and Elmore duo that helped the Herd find their rhythm and establishment of defense to guide the team to 15 total steals, with five of them coming from sophomore guard Jarrod West. Marshall forced 21 turnovers of FAU. The Panthers recorded seven steals over Western Kentucky, forcing 18 turnovers.

“They [FIU] were probably more confident in going to beat Western,” D’Antoni said. “It certainly alerts us, and we better be ready to play.”

The Herd is expecting a large crowd Saturday night, similar to the home game against Western Kentucky. According to the Marshall Athletics ticket office, the reserved seating sections in the lower and upper levels are sold out. The upper level general admission bleacher seats are still offered. The ticket office is anticipating lengthy lines.

Marshall head coach D’Antoni said that FIU almost exclusively uses the pick-and-roll method during games. D’Antoni emphasized that the Herd has to help control the ball and execute shots despite the pressure that the Panthers will bring on the court.

“They play like we do,” D’Antoni said. “We’ll have to be a good pick-and-roll defending team, and we have to take care of the ball.”

Tipoff is set for 7 p.m. Saturday night at the Cam Henderson Center.