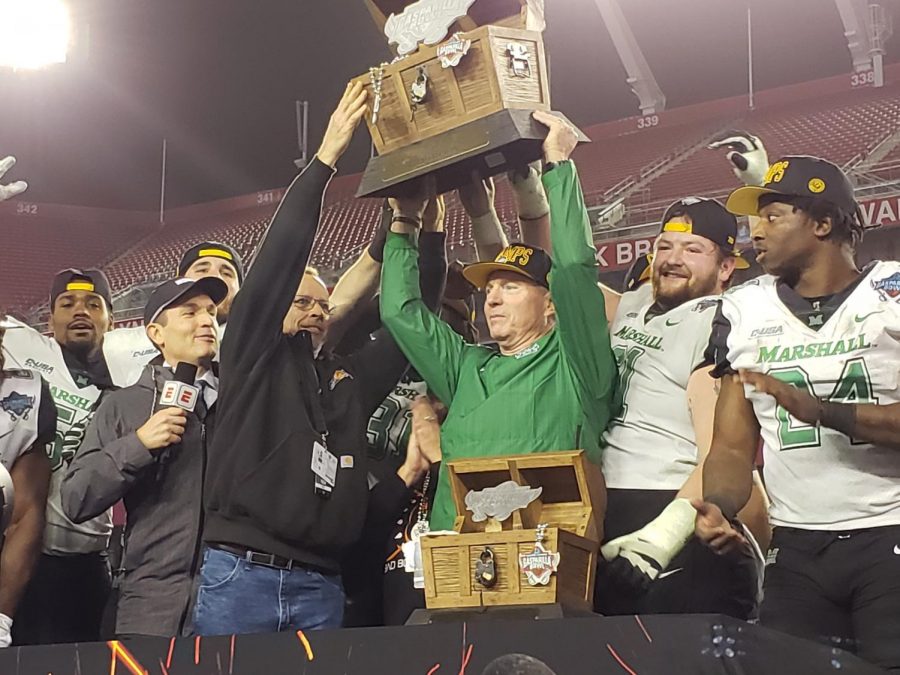 After a slow start to the first quarter, Marshall’s offense came alive on an 81-yard drive capped by Isaiah Green’s first career rushing touchdown – a 10-yard run off the left edge. That touchdown run was set up by a trick play as Green pitched it to Marcel Williams, who threw back across the field to Green, who then found Xavier Gaines for a 27-yard gain.

The Thundering Herd doubled its lead 37 seconds later after a bad snap was recovered by Darius Hodge and returned to the USF 1-yard line. Anthony Anderson scored on the ensuing play, leaping over the line to push Marshall’s lead to 14-0.

South Florida got on the board using a trick play, as Tyre McCants found Randall St. Felix for a 38-yard touchdown on a wide receiver pass. The Herd quickly answered that with an 80-yard drive capped by an 8-yard TD by Brenden Knox to take a 21-7 lead after one quarter.

Marshall added to its lead late in the second quarter when Keion Davis scored on a 5-yard touchdown run, padding the Herd’s lead to 28-7.

“It was as simple as that,” Davis said. “(Cain Madden) made the block and I finished the run.”

South Florida tacked on a field goal just before halftime to send the teams to the locker room with the Herd in front, 28-10.

USF opened the second half with a long drive that lasted nearly six minutes but only mustered a field goal out of it. Marshall responded with a Justin Rohrwasser 28-yard field goal to increase its lead to 31-13.

South Florida cut the Herd’s lead to 31-20 late in the third quarter, as Blake Barnett connected with St. Felix for his second touchdown reception of the game.

The Herd iced the game in the fourth quarter when Davis scored on a 16-yard run to extend the lead to 38-20. Marshall’s defense kept USF’s offense in check and closed out the 12th bowl win in program history. Davis, who was named the game’s most valuable player, finished with 94 yards and a pair of touchdowns on the ground and added 77 yards on kick returns.

“Keion is a special player,” Holliday said. “He’s been that way, he makes things happen every time he gets the opportunity. I’m proud of him and the way he went in there and stepped up when he had to make plays.”

USF’s offense, which was averaging nearly 450 yards per game, was limited to 360 yards and was 4-for-15 on third down conversions. Marshall had four sacks of Barnett, including two by Channing Hames, who was the 2017 New Mexico Bowl Defensive MVP.

Marshall finished its season with nine wins, marking the fourth time under Holliday that the Thundering Herd reached that mark.

The Herd sent its 17 seniors out the only way the team wanted to: with a win.