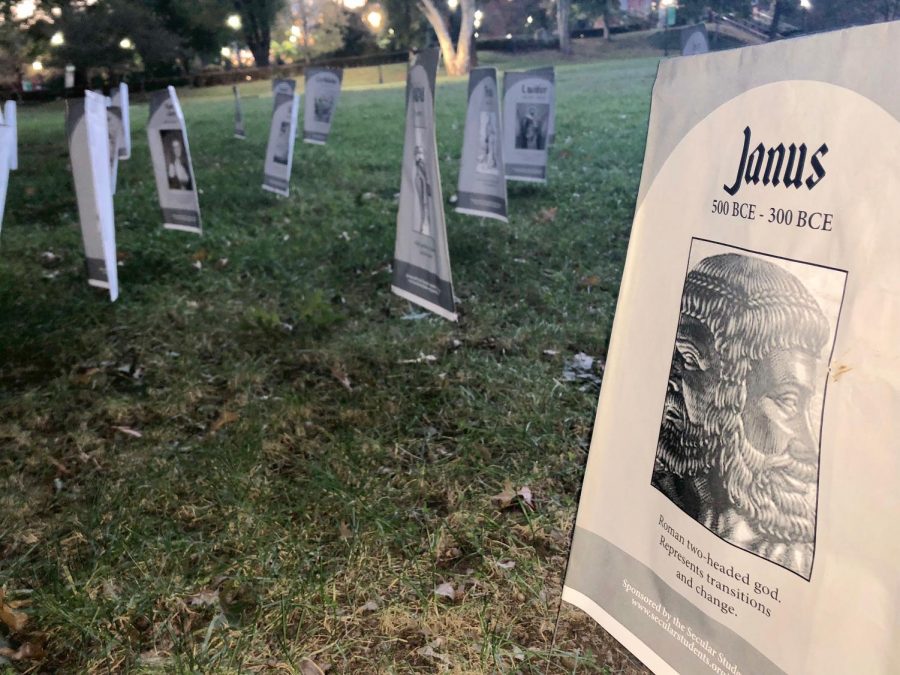 The Secular Student Alliance of Marshall University combats negative stigmas surrounding secularists and the non-religious and promotes critical, logical and innovative thinking amongst its members and community.

Earlier this semester, monuments of supposedly dead, no-longer-worshipped deities from the past were displayed by the Secular Student Alliance as a graveyard on Buskirk Field encouraging students and viewers to reflect on their religious beliefs.

The monument was a physical demonstration of how many deities have been worshipped in the past and are now mostly forgotten, Maggie Capehart, senior student and co-president of Secular Student Alliance, said.

“What makes some peoples’ devotion and faith any different from those whose deities are long forgotten today?” Capehart said. “How could you be more sure of your god(s)’s existence than those people were of their gods now on the tombstones?”

The demonstration was meant to show those who associate worship strictly with popular religions like Islam and Christianity there are many gods that have been worshipped with as much sincerity and belief as many people hold about their god(s) today, she said.

Promoting skepticism, innovative and critical thinking and questioning of cultural, religious and other beliefs using evidence and reasoning is a main goal of the Graveyard of the Gods and the Secular Student Alliance, Capehart said.

Events like Graveyard of the Gods and Ask an Atheist Day, another Secular Student Alliance event on campus, she said, are incredibly important in combatting negative, untrue stigmas surrounding people who consider themselves atheist or secular.

“Once people see our disbelief is not out of anger or spite, conversation and understanding ensues,” Capehart said.

David Hurlburt, a senior student and co-president of Secular Student Alliance, said the goals of the club are to protect the separation of church and state and to promote secular values and science literacy.

The club welcomes anyone who values secularism, the separation of church and state, whether personally religious or not, Hurlburt said.

There are common misconceptions that atheists and secularists have no morality, are depressed and hate God and religion, he said.

“These stigmas can be lifted by further engaging with the community,” Hurlburt said. “We advocate secularism because we believe in freedom of religion.”

In religious areas such as West Virginia, it is important to give this marginalized group a voice and protect citizens from religious overreach from government policies, Hurlburt said.

Secular Student Alliance gives a voice to secularists in several different ways including bringing in guest speakers to talk about the harm of science denial, co-hosting panels with religious groups to promote open dialogues and holding debates about morality, evolution and creationism on campus.

Embracing civil rights, social justice and other ideals informed by a humanist philosophy is the main objective of Secular Student Alliance, Capehart said.

“We cooperate with other groups that share our values to organize activities and outreach to educate the community while advocating for separation of church and state,” Capehart said.

Activism encouraged by the group is essential to combat stigmas and stereotypes about those who are atheist or secular, she said.

“When someone identifies as atheist, people imagine a grumpy, nihilistic, immoral person who is angry at God,” Capehart said. “Many of us have been called broken and sinful by our own families.”

Atheism is not the same as hating religion or religious people, she said, and Secular Student Alliance and most atheists and secularists stand for equality and civil rights.

Capehart said she thinks it is also important to understand not all secularists are atheists, because being secular simply means believing in separation of church and state.

Almost all atheists and secularists hold their beliefs due to ideas based on humanist philosophies, evidence and reasoning, not hatred or other negative feelings, she said.

“Not all religions are inherently harmful or even theistic,” Capehart said. “But I think religion is deeply rooted in our psychology: it’s the need for socialization, to have an identity and to feel meaning in one’s life.”

Secular Student Alliance meetings are from 5:30 to 6:30 p.m., Wednesdays in Smith Hall room 108, and they will have their second free annual comedy night, featuring adult-oriented and possibly offensive content, at 6 p.m., Dec. 8, in the Memorial Student Center.