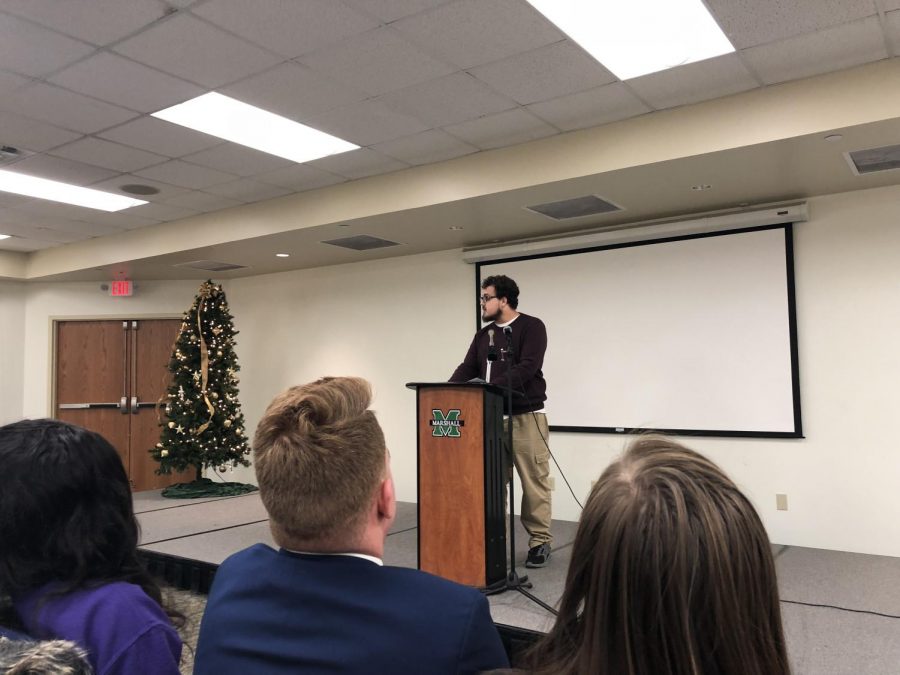 Christie Kinsey, Board of Governors secretary and chair of the Building Names Review Committee, said the members of the committee, consisting of several presidents of student organizations and various faculty members, were given by university President Jerry Gilbert the collective task to examine building names on campus and offer insight and recommendations.

As part of their task, the committee will allow the public to comment their opinions about changing the name of Jenkins Hall and provide their input on possible new names.

“There will be an online comment period from Dec. 4 to Dec. 14,” Kinsey said. “On Jan. 14, the committee will review the comments and put together a report we will show to President Gilbert.”

Upon reviewing the report and adding any additional comments of his own, Kinsey said, Gilbert will send the report to the Board of Governors for consideration at their regularly scheduled meeting Feb. 28, 2019.

The online survey to participate in the public dialogue can be found under the ‘building names’ link in the ‘documents and initiatives’ section of Marshall’s president’s page, where transcripts of the speeches given by students and faculty members at the information session will also be available.

David Trowbridge, associate professor of history and director of African and African American studies at Marshall and author of “A History of the United States,” said the name of Jenkins Hall is not a problem only because Albert Jenkins was a Confederate general or a slave owner, but also because of his reprehensible conduct during the Civil War. Records of Jenkins’ actions during this time, including detailed diary entries of residents and various news sources, reveal many instances of he and his men going out of their way to abduct free men of color to sell them into slavery.

“Jenkins and his men made the abduction of people of color a primary aim of his 1863 raid,” Trowbridge said. “African Americans fled the area when they heard Jenkins was coming due to the violent reputation he had built.”

Renaming Jenkins Hall would not be an erasure of history, but rather an acknowledgement of it, Trowbridge said.

“Memorializing men like Jenkins can only be possible by the erasure of select parts of their history,” he said. “Thanks to the students and administration of this institution, that history is being recovered. Will we choose erasure or will we face the past?”

John Ross, a junior philosophy major and president of Marshall’s Students for a Democratic society, the group that initiated the Building Names Review Committee, said due to the nature of the group’s anti-colonial, anti-imperialistic views and their political convictions, when they discovered the history of Jenkins and his relation to Jenkins Hall, they knew their next campaign would be to have the building renamed.

“It is wonderful to attend a university dedicated to having a dialogue around the considerations and opinions of its students,” Ross said.

SDS, he said, is a group of members with diverse opinions, ideas and philosophies focused on progressive activism and education to make the world a better place, unifying them in their position to rename Jenkins Hall.

“We want to preserve history at SDS,” Ross said. “We have no desire to erase, diminish or whitewash history.”

With the renaming of Jenkins hall, he said, the group’s members hope to encourage others to study the history of Jenkins and to make his story more public.

“Jenkins did horrid things,” Ross said. “He kidnapped human beings, and he thought he was righteous enough to own human beings.”

Naming a building after someone does not simply recognize their historic value, Ross said, but it also pays tribute to and honors an individual’s contribution to history.

Jenkins and his story belong only in history books, Ross said, not on a platform of importance where he is memorialized in a building that has produced so many influential scholars.

“Jenkins represented injustice during his life, and we endorse our university to rename Jenkins Hall after someone who represents justice,” Ross said. “There are plenty of qualified candidates.”

DeShonda Stewart, president of Marshall’s Black United Students, said she, as a student, has always greatly appreciated the university’s dedication to hearing the concerns of its students.

“Marshall has always made sure all students, no matter race, sex, religion, age, sexual orientation or national origin, feel welcomed to the herd family,” Stewart said. “No matter the issue, our voices will always be heard. The Building Names Review Committee will definitely hear the students’ voices.”

Debates around changing outdated or inappropriate names of buildings and monuments on college campuses is not an issue exclusive to Marshall, Trowbridge said, noting that similar instances have occurred all over the country and world, including recently at the University of Carolina, Duke, Eastern Carolina and the University of Oregon.

“Sometimes we make mistakes,” Trowbridge said. “Sometimes we get it wrong, and we name buildings after the wrong people.”

Trowbridge said he hopes the university will consider taking the advice of historians or perhaps even hiring one for this specific purpose, and he hopes the review committee will not rely too heavily on internet comments.

“Historians who have looked to see the backstory behind the decision to name the building after Jenkins have found no instance of people knowing his history, and I would argue this name would not have happened without the erasure of that history,” Trowbridge said. “I don’t see the nuance here.”