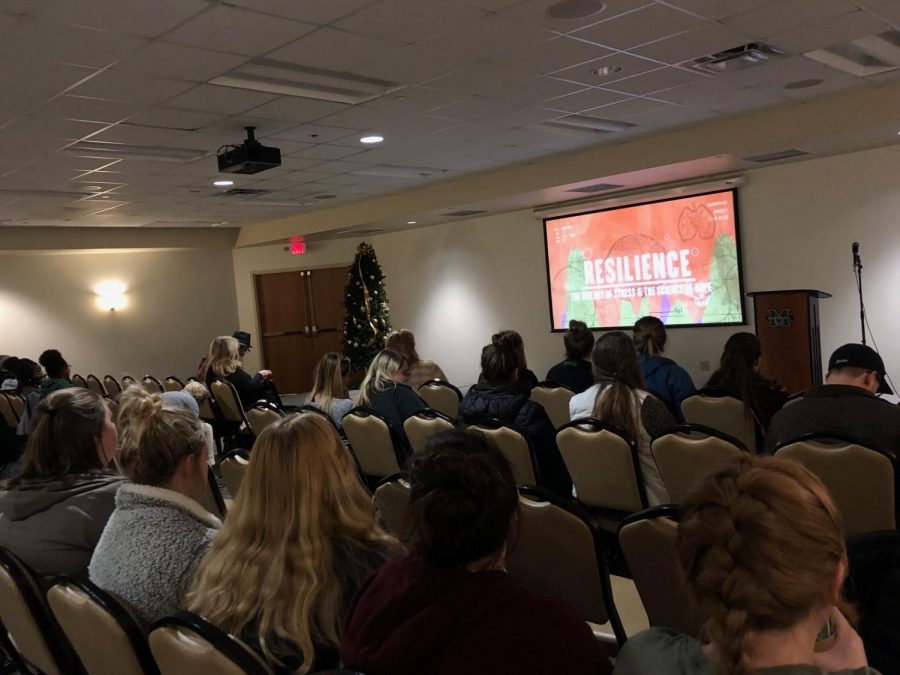 Marshall University students and local community members and social workers watched the documentary Resilience and discussed the causes and impacts of toxic stress and adverse childhood experiences, Tuesday, in the Memorial Student Center.

Marshall University students and community members watched the documentary “Resilience” and discussed the science of toxic stress and its impacts, Tuesday, Nov. 2, in the Memorial Student Center.

“Resilience,” a documentary based on recent medical studies linking heart disease to adverse childhood experiences, was released in 2016 and directed by James Redford, who also directed the 2015 documentary “Paper Tigers.”

The documentary also focuses on a new movement aimed at helping and preventing the impacts of toxic stress, a leading cause of issues ranging from depression, substance abuse, heart disease and cancer.

Toxic stress, Bowyer said, could be the result of any number of issues including violence, substance abuse, neglect, poor relationships, poor family structure or other situations not easily overcome without a support system.

“If you have no support system to help you work through such adversities, then you will be in a dark, lonely place in terms of stress,” Bowyer said.

Bowyer said one of the most important themes throughout “Resilience” is that it is okay to talk about one’s problems and to be willing to ask for help.

“The film focuses on the idea that it’s not about what’s wrong with you, but rather what has happened to you,” Bowyer said.

Due to the drug epidemic, ACE scores, calculated by answering questions about traumatic childhood experiences, such as physical and emotional abuse and neglect, physical and substance abuse in the household and having a family member in prison, are probably higher than average in local communities, Bowyer said, although no specific studies have been conducted in the area.

“Young people today are growing up in much tougher times than when I was growing up,” Bowyer said. “It’s incredible.”

The studies the documentary is based on were conducted in the ‘90s, she said, and focused on participants who were all educated, working, ensured, middle-class Americans, and they still revealed shockingly high ACE scores with direct links to negative health outcomes.

Experiences people have during their childhoods have a lifelong impact not only on their mental health, but on their physical health as well, making it vital that children are offered proper guidance and support during their growth, Jeanette Rowsey, project coordinator for Strengthening Families West Virginia, said.

Some children, Rowsey said, are never able to learn socialization skills because they grow up in chaotic home environments where they often lack healthy examples.

Rowsey said she believes teaching is already a very difficult occupation, but if teachers had more support within their school systems and more appropriate training, even the most unfortunate children could be helped and taught how to behave.

“Teachers obviously aren’t counselors, so they can’t diagnose these things, but they do need to know the building blocks of behavior and be able to work with children to support them with whatever they need to learn,” Rowsey said.

Bowyer said she also believes it is important to support the parents and grandparents helping to raise children.

“We are not born resilient, it takes a lot of work over time,” Bowyer said. “It’s more than just telling your doctor you don’t feel okay and you need some sort of pill.”

Rowsey said she believes parents almost always want to do their best, but sometimes situations and other factors make it near impossible. The best way to help parents is to supply them with the knowledge they need to support their children, she said.

“Just because a child has grown up in a chaotic situation, that does not mean there is no hope for them,” Rowsey said. “It’s important to find people you trust and can talk to about these things, because there are solutions. It’s okay to reach out for help.”