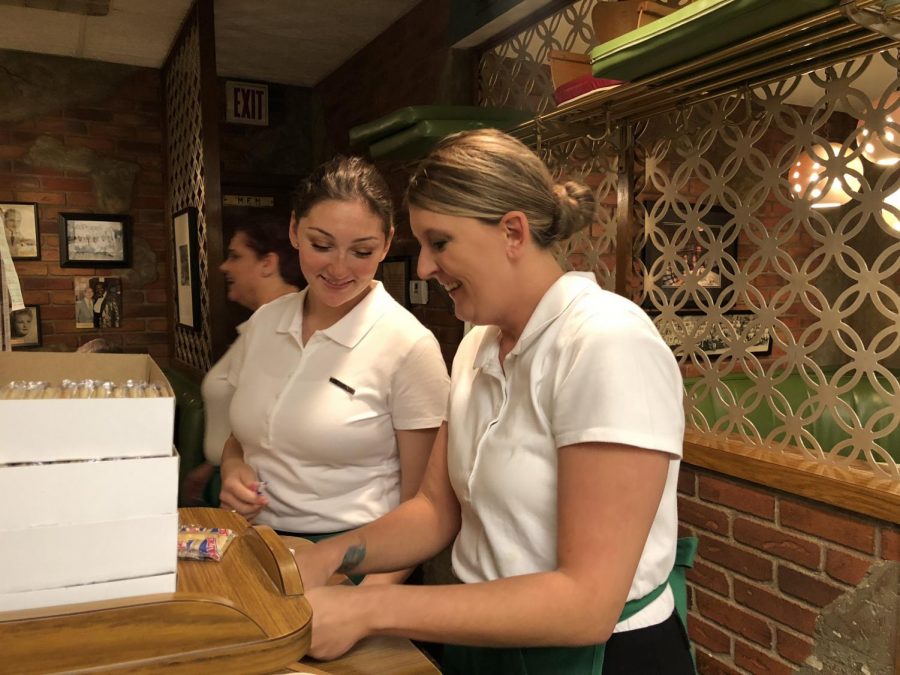 After much discussion, Jim's Steak and Spaghetti opted for new uniforms to allow more comfort in the workplace.

The nostalgic Huntington restaurant, Jim’s Steak and Spaghetti House, has changed its uniforms designed in the 1930’s to modern day slacks after 80 years of business.

Jimmie Tweel Carder, owner of Jim’s Steak and Spaghetti House, said changing the uniform was hard due to the significance of the attire to not only the restaurant but also to her father.

“We always had dresses, and my dad prided himself on the dress, because it stayed unique to Jim’s,” Tweel Carder said. “And that was part of our legacy and part of my dad, and it just hurt my heart to have to do it but I’m okay with it now.”

Tweel Carder said the change of uniform was also sought out to be beneficial in gaining new, younger employees.

“We decided that it might be helpful in finding new employees because the younger generation didn’t like the dress, and it could therefore be a help in employment,” Tweel Carder said. “But we pride ourselves on not changing not stubbornly but traditionally. And this will be the uniforms for years to come now.”

Trish Woody, 30-year employee at Jim’s Steak and Spaghetti House, said she had looked for nine months for new uniforms with Tweel Carder because she was not for the change as well.

“I’m here almost more than I am home so it was hard for me to give up after wearing it for 30 years, but we had no choice,” Woody said.

Woody said being an employee at Jim’s for a long duration she has watched many Huntington community members grow up and crave the same uniformity of the restaurant.

“There’s people that come in here that I use to put in the high chair, and they come in here and want the same thing, because their lives are moving fast so they come here and everything’s the same,” Woody said. “And they like that it’s a home feeling and the uniform was just part of it. It’s a step back in time and you don’t see that anymore.”

Woody said to keep this consistency she implants the same teachings onto new employees that the restaurant’s founder, Jim Tweel, introduced to her.

“When I train I get onto people and I’m very strict on them because I take it back to when I started and the things I knew Mr. Tweel expected I try to instill that in them during training because its important to me I wouldn’t have spent 30 years here if it wasn’t,” Woody said.

Woody said the uniforms do not differ too far from the old ones, and they are easier to access.

“Most people, where the top is white, don’t realize it’s a different uniform at first and this outfit is more comfortable,” Woody said.

Mary Dean, 13-year employee of Jim’s Steak and Spaghetti House, said overseeing the uniforms was more technical than emotional for her so she experimented every option.

“We tried to get a seamstress to make them, but she said it would take a production crew because of the detail,” Dean said. “And after searching for months there was a few remaining online for the highest bid.”

Dean said she chose the same color scheme to make the change not as noticeable to the public.

“I chose to do the white on top, black bottoms, and green aprons so people wouldn’t really notice the lower part and make it as inconspicuous as possible,” Dean said.

Dean said the uniforms have evolved, similar to how career opportunities for women have also evolved.

“The original uniforms are what women wore back in the 30’s if they were going to wait on tables,” Dean said. “It was more subservient in those days then what it is now. And times have changed; there’s more career opportunities for women.”

Dean said the sentimental value Jim’s has on the public is why the uniform change was shocking, but everyone still comes in and is filled with the same emotion.

“People didn’t want it to change due to nostalgia,” Dean said. “This is the one place they could come and remember coming to as a child, and they didn’t want that to go away. But they still hear our voices and see the restaurant and wallpaper and have the same feeling. And you can’t go into another restaurant and find someone who has been a waitress their for 30 years or even a bus boy.”

Lillie Bodie can be contacted at [email protected]