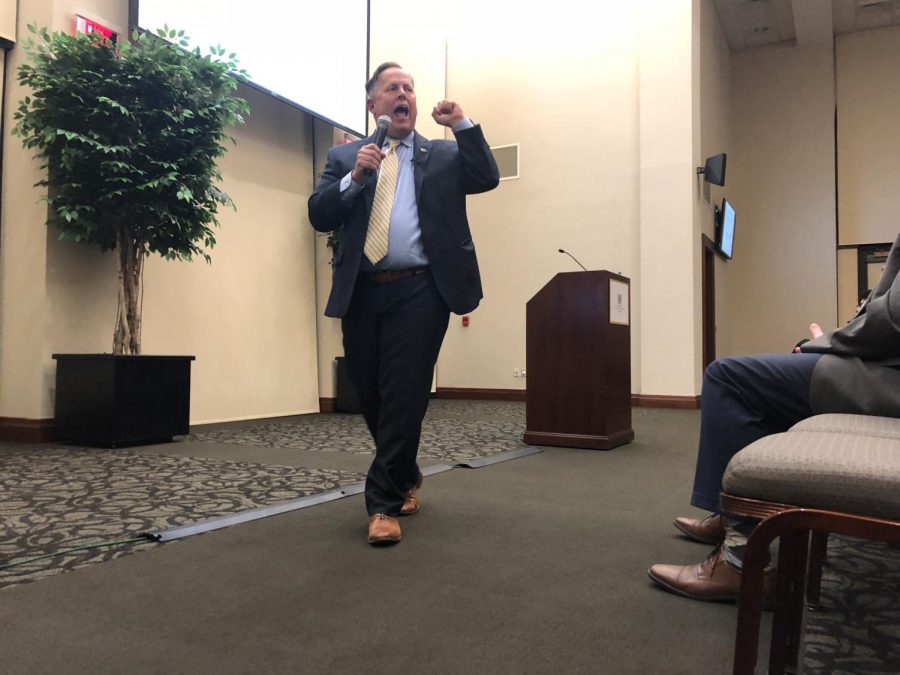 Professor Charles A. Smith of the University of California spoke to Marshall students and faculty about the causes, impacts and possible solutions regarding gerrymandering in America.

Professor of political science and law at the University of California, Charles A. Smith, explored the issue of gerrymandering in America, Thursday, Nov. 8, at Marshall University’s Brad D. Smith Foundation Hall.

As part of the Amicus Curiae lecture series, sponsored by the Simon Perry Center for Constitutional Democracy, Smith spoke of the impacts and causes of gerrymandering regarding its constitutionality and the recent mid-term elections.

“The difference (between voting in authentic districts and gerrymandered districts) is like the difference between a sports game and watching professional wrestling,” Smith said. “One is genuine competition; the other is entertainment.”

For example, in a game of basketball, even the worst team can beat the best team on any day, Smith said, while in professional wrestling, there are predetermined outcomes. He said the same principle applies to gerrymandered voting districts; there is no contest, only a display of activity.

“When politicians pick their voters rather than voters picking their politicians, there is no longer an election, only a coronation,” Smith said.

Smith said perhaps one of the worst things about gerrymandering is whoever is in power, historically, has been guilty- both Republicans and Democrats.

“If you don’t expect politicians to do whatever it takes to tip the scales in their favor, fairly or unfairly, you don’t really understand who these people are,” Smith said. “It’s in their nature to want to win; their first mission is getting re-elected.”

If politicians do not get re-elected, they do not have the chance to implement policies for issues they care about, Smith said, so no one should be surprised when politicians rig the system.

“The votes are not allocated with the numbers of seats gained, and this diminishes the role of popular sovereignty in our selection of representatives,” Smith said.

Resulting from the recent mid-term elections, Democrats narrowly retook the House of Representatives, flipping about 35 seats in the process, a historically high number, but still Democrats will barely be in charge, Smith said.

The only reason Democrats were able to win the house back, he said, is because they overcame built-in biases with supermajorities in states like Pennsylvania. Many states with significant gerrymandering issues are purple states with similar numbers of registered Democrats and Republicans, he said.

While the constitution does not grant citizens the right to proportional representation, Smith said, it certainly grants them the right to equal protection under the law. If one party gains a number of seats from a certain amount of votes, and another party gains more seats for the same amount of votes, that situation is not constitutionally proper, he said. This occurs regularly in several states across the country.

“Who works for who?” Smith said. “Do you work for your congress people or do they work for you?”

Partisan gerrymandering hurts everyone by allowing politicians to largely ignore the needs of their voters, he said.

“I submit to you, if we can stop partisan gerrymandering, we will revert to the proper relationship in which politicians must abide by the will of their voters,” Smith said.

Proctor said Smith has an impressive list of publications, the most relevant to gerrymandering being a book he co- authored called “Gerrymandering in America: the House of Representatives, the Supreme Court, and the Future of Popular Sovereignty in America.”