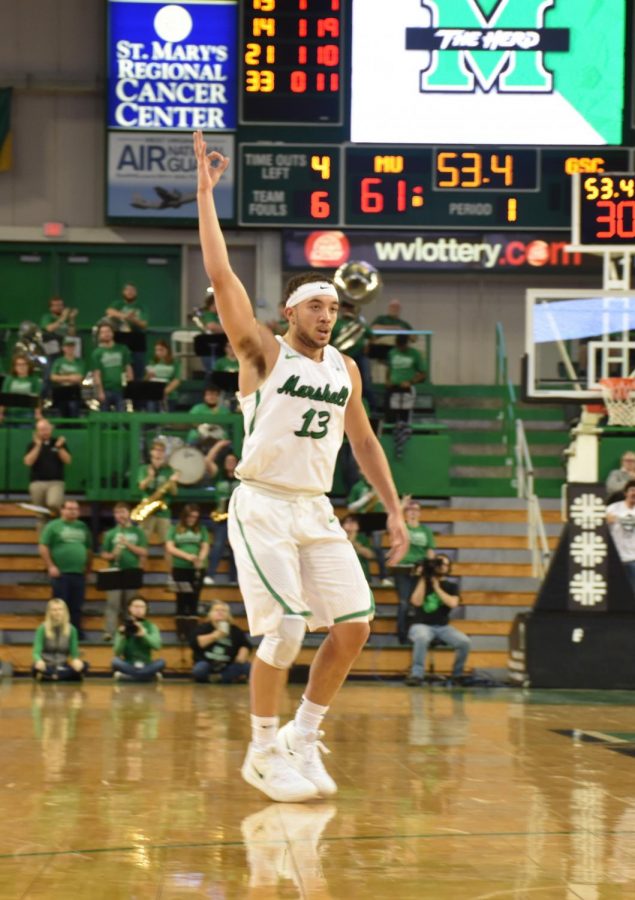 Sophomore guard Jarrod West holds up a hand gesture after hitting a 3-pointer in Marshall’s 113-108 win over Glenville State. The Herd plays another exhibition Thursday before beginning the regular season Nov. 7 at Eastern Kentucky.

The Marshall Thundering Herd returned to the Cam Henderson Center Sunday and defeated Glenville State College 113-108 in its first exhibition game of the season.

“I thought we contested most of (Glenville’s shots), but when you shoot like that, it runs you out of kilter,” Marshall head coach Dan D’Antoni said. “You start giving up things normally
you wouldn’t.”

Offensively, Marshall senior guard C.J. Burks led the Herd with 25 points. Burks was 10-of-13 from the field, made three of his five three-point attempts and was 2-of-2 from the free throw line.

The Herd struggled from three-point range. Marshall made eight of its 25 three-point attempts, (32 percent) and senior guard Jon Elmore shot 0-for-6.

“They play the same system we play, and when you play that system and get hot off of three’s, you can play with anyone,” D’Antoni said.

Elmore said despite the Herd’s ability to score points, its defense has work to do.

“Our defense has got to get a lot better,” Elmore said. “We have to get in better shape, but that’s what these (exhibition games) are for—to see where we have to improve.”

The Herd closes its exhibition slate against West Virginia Wesleyan Bobcats at 7 p.m. Thursday at the Cam Henderson Center.