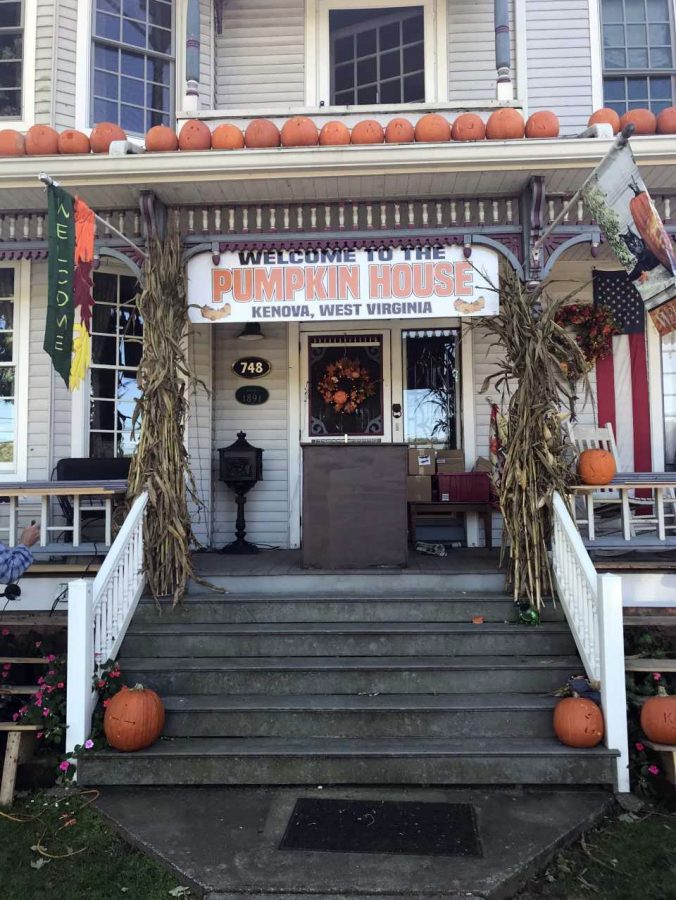 Pumpkin carving at the famous Pumpkin House in Kenova, West Virginia, is set to continue throughout the week.

Volunteers from Marshall University’s Herd Recovery organization began helping to carve 3,000 pumpkins into jack ‘o lanterns to be used in the decoration of the house for viewing in the last two weeks of October.

Many local volunteers help decorate the Pumpkin House every year.

“We’ve come to the conclusion that there are a lot of likeminded people on campus who want to help out,” Jacob Thomas, president of Herd Recovery, said. “We want to connect them.”

The Pumpkin House was built in 1891 and began its first pumpkin display in 1978 with four pumpkins. The tradition and self-proclaimed obsession began when owner of The Pumpkin House and local pharmacist, Ric Griffith, started carving pumpkins each October for his daughters.  He said it continued to grow into what it is today and now has annual visitors from across the world.

“The greatest joy for me is the wonderful people who show up to help us,” Griffith said.

The carving of the pumpkins began Oct. 19 and is still in need of volunteers to help out, Griffith said.

Thus far volunteer help on Griffith’s Pumpkin House has come from many local organizations, including the Marshall’s Thundering Nerds math club. The Thundering Nerds have an entire display on the lawn of the house, arranged in a mathematical puzzle for guests to try to solve.

The process of carving 3,000 pumpkins takes up a hefty amount of time Griffith said, and in order to meet the end of the month deadline, he and volunteers work countless hours throughout the month.  400 to 500 pumpkins need to be carved daily in order to accomplish the Pumpkin House’s goal. The pumpkins are cleaned out by hand and carved using drills and jigsaws because they work more efficiently than a pumpkin carving kit would, Griffith said. Once they are carved they are sent to soak in a liquid mixture containing bleach in order to preserve and prolong the life of the pumpkin.  The bleach prevents mold from growing, Griffith said.

The pumpkins produce up to 3 million seeds, one in five of which end up in Griffith’s yard.  He said in previous years he has disposed of the pumpkin remains through a local farmer but is unsure what he will be doing with them this year.

“Usually I have a farmer who takes all of the cuttings, seeds, scrapings and old pumpkins, and feeds it to his cattle and hogs,” Griffith said.  “This year I’m worried about that because my farmer backed out on me, so I’m scrambling around trying to find a way to avoid wasting it.”

The Pumpkin house is featuring a new attraction this year: animals.

“The Cabell Wayne Animal Shelter is going to be bringing some dogs and cats, setting up in the corner of the yard to entice people to adopt them,” Griffith said.

“I’ve had Marshall students stay until dawn to help me carve,” Griffith said.

A “pleasant surprise” for Griffith, he said, is how people in the local area have developed a sense of pride in The Pumpkin House, and he credits Marshall for some of that pride.

“The Marshall connection is an opportunity for me to let people see who helps make this happen for people not from the area,” he said.

Griffith said he hopes to gain even more help from the Herd, and he is not artistic enough to create the unique designs in pumpkins and hopes to elicit help from those who are capable.

“I’d like to send an open invitation to the art department at Marshall,” he said.  “Maybe some students who are capable of sculpting three dimensional designs in the pumpkins would be interested. I will provide the pumpkin.”

Although there is a lot of work left to be done in preparation for thousands of visitors who will come to Griffith’s home, he said he would keep it growing if it wouldn’t overwhelm the volunteers.

“Volunteers make this happen,” he said.  “It’s just a pumpkin, but it’s also a sense of community pride.”

The Pumpkin House will be open to visitors until Halloween night from dusk until the early morning hours.  The address of the location is 748 Beech St., Kenova, West Virginia.