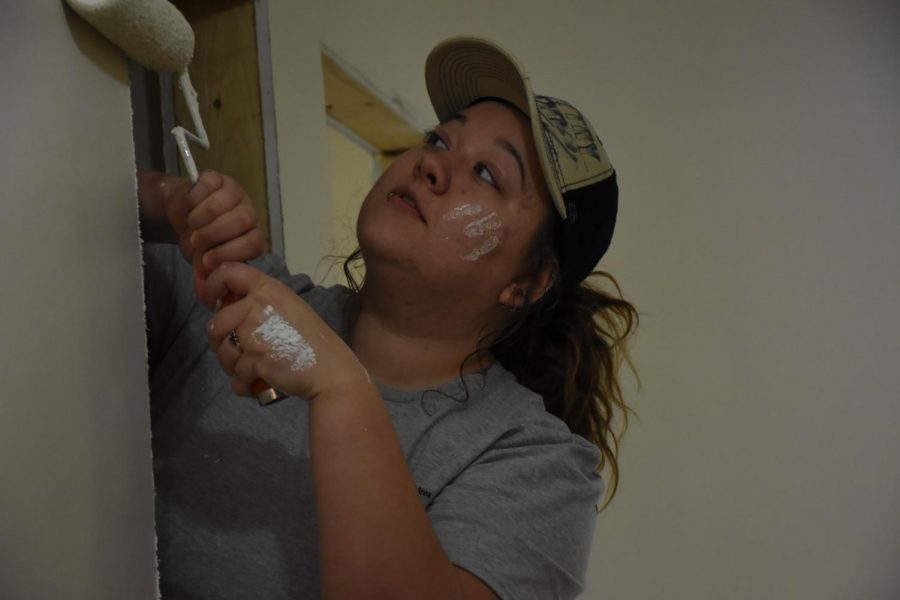 Cambria Farmer, president of Marshall University’s Habitat For Humanity, painting the door frame of one of the homes.

A once barren lot is now the future home for a family of five.

Farmer is the president of Marshall’s Habitat For Humanity chapter, an organization that she said is personally fulfilling for her and allows her to give back to her community.

“I find purpose in giving back to others,” she said.

Habitat For Humanity is an organization that is dedicated to providing affordable housing to those in need, Farmer said, and Marshall’s chapter has contributed to 11 veterans in the community, several of which were homeless.

Farmer said Habitat For Humanity receives grants and donations from community members and local businesses to fuel its housing mission, but most of its funds are from fundraising.

These homes are not free of charge but are severely reduced. Farmer said the houses have a zero percent interest rate, meaning the owner pays only the baseline worth of the home.

Habitat offers Marshall students a unique way of helping their community and earning volunteer hours.  Mark Kazee, senior biology major, said he volunteered on the promise of free pizza but quickly found a reason to stay.

“I stayed [after the pizza] because I had so much fun,” Kazee said.

He said he simply enjoys having the opportunity to paint and build homes, an exclusive aspect of Habitat’s mission.

“It gives me something to do besides sitting at home studying,” Kazee said.

Each Huntington Habitat house is built in roughly three months by volunteers. Marshall’s Habitat chapter is currently working at three sites, the biggest being a five bedroom home for a family of five at 1237 Jefferson Ave. Farmer said there is a dedicated crew working at the house sites Tuesday through Saturday weekly.

Marshall students have contributed at the Jefferson Ave. site by transporting flooring and tiles to the site as well as painting.

Marshall’s Habitat Chapter hopes to continue to go.  The organization was started several years ago but left dormant after the previous president graduated, Farmer said.

“Being able to give my time to something meaningful is what makes me feel good,” Farmer said.

She said this is why she took over and is trying to revitalize the organization at Marshall.

Marshall’s Habitat chapter plans to grow in numbers and implement exposure by sponsoring events on campus.  Nov. 5 they are building a wall on the plaza of the Memorial Student Center that will be used in a future Habitat home.

“If you want to make a difference in your community this is where it starts,” Farmer said. “Nail by nail we are improving Huntington.”