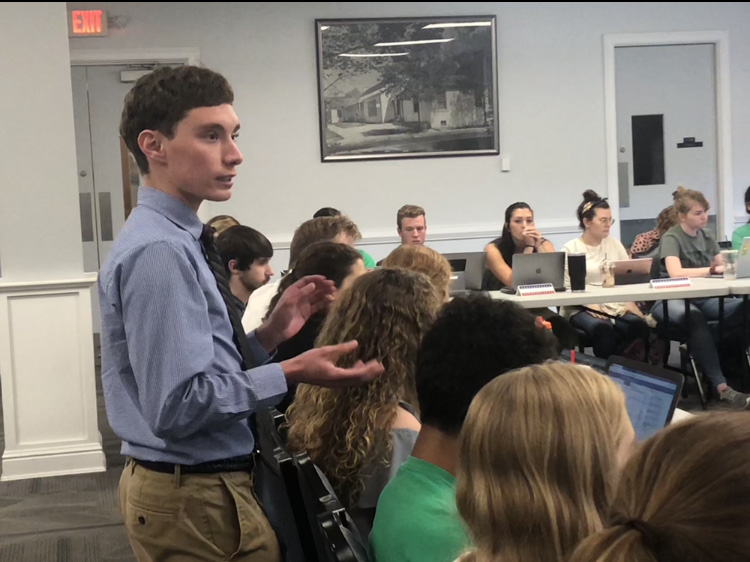 The Student Government Association approved a resolution by a unanimous vote after several amendments were made Tuesday, Oct. 9, in the Memorial Student Center Shawkey Room.

The legislation would have the student sergeant at arms enforce a dress code for student senators, and it bans casual items of clothing such as ripped jeans, graphic t-shirts and cargo shorts.

“The reason we’re discussing the dress code is because of the visitors who may be in here during these meetings,” said Student Body President Hunter Barclay. “We could have Board of Governors members here, President Gilbert, Provost Taylor and a number of influential people. Students from Mountwest Community College will be here next week to see how our senate operates so that they may try to model some of our ideas. We want to look professional and put our best foot forward.”

Sergeant at Arms James Prentice said this resolution was not meant to be predatory or strict.

“Ultimately, I’m not going to go out of my way to come after you,” Prentice said. “This resolution is just so that we have something in place to legitimize our Senate, and make it so we have a standard of professionalism.”

If a student senator comes to an SGA meeting wearing the prohibited items, they are subject to a warning from the sergeant at arms. After the initial warning, the senator is subject to removal from that specific meeting. Students accused of noncompliance with the dress code are able to appeal the disciplinary actions. Despite this, several senators said they were worried about an abuse of power on the end of the enforcing body, the sergeant at arms.

“We’re a student senate,” Senator Brian Stein, one of the resolution’s sponsors, said. “You don’t see people in our United States Senate coming in with athletic shirts or hats on. This is simply about decorum.”

Senators brought up certain concerns regarding legislative semantics and rhetorical implications of the resolution.

“We are running on this idea that we don’t want Student Government to be a country club,” Senator Jacob Gressang said. “Except, we’re establishing a dress code. We’re saying ‘Oh, you have to dress this way to come here,’ but this runs counter to the idea of inclusivity we’re promoting. If you are coming to meetings and giving it your all, I think you should be able to dress however you need to dress to be here.”

“We have an important reputation to uphold,” Petracca said. “A lot of other student governments look up to us. Mountwest Community College is coming here next week just to watch how we operate. That’s something to be proud of. Don’t take our status lightly. We need to work to maintain our professionalism and our progress.”

Next Tuesday, Oct. 16, the Student Government Association will meet to follow up on the highly discussed House of Representatives bill. The meeting will be at 4 p.m. in the Shawkey Room and will be open for students and community members to attend.

Hannah Graham can be contacted at [email protected]