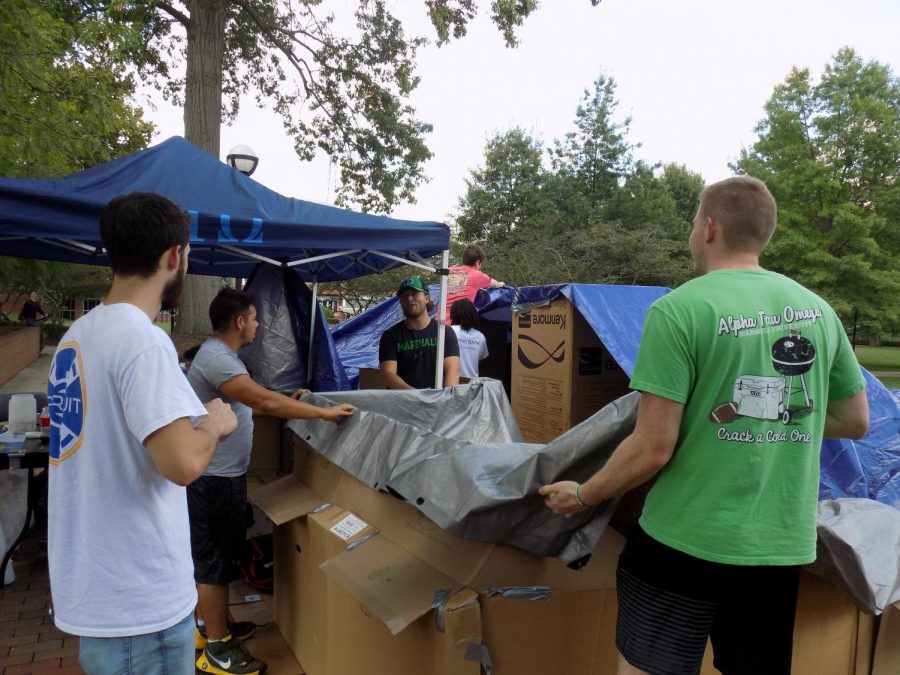 Members of Alpha Tau Omega building their shelter for their philanthropy event.

Marshall University’s Alpha Tau Omega started their annual philanthropy event Sept. 17 outside of the Memorial Student Center. This is the 13th year the fraternity has put on the event.

Members said they want to make it clear the purpose of going homeless is to raise money for Huntington’s City Mission.

Mitchell said the importance of the event and the fraternity’s mission is to raise awareness about homelessness in Huntington.

“We’ve been doing this for so many years, it’s expected,” Mitchell, a junior biochemistry major, said. “This is a big deal for us, and we take this week very seriously.”

There are 71 members in the fraternity and each of them is expected participate in the event. Members of the fraternity build a structure made out of cardboard and take shifts sleeping and staying in the boxes throughout the week.

The event not only brings awareness to the cause, but it also allows members of the fraternity to be a part of something bigger. Marshall’s ATO chapter was the first to start going homeless as a philanthropy event. The event received recognition and ATO Congress, the fraternity’s national chapter, has adopted the idea and made it their own by allowing other universities to participate in the event as well.

“All the money we make goes straight to the Huntington City Mission to help benefit the homeless in our community,” Brigham Warf, junior and public relations major, said.

Warf said anyone can donate. The fraternity shares links to their Go Fund Me account on all their social media platforms, and they said they encourage students and faculty at the university to get involved.

Warf serves as the fraternity’s historian, and he said he is passionate about using his platform to create awareness about the important cause.

“A lot of our work gets overshadowed by the stereotypes that surround fraternities,” Warf said.

Warf said the community service the fraternity participates in is important to him, and he will continue to help within the community as much as he can.

Raising awareness for homeless is not the only philanthropy event that the fraternity participates in. In February, ATO offers a Valentines Raffle for Hospice of Huntington. The fraternity also participates in smaller community service acts on the weekends.

“We had guys volunteer at the Little Victories animal shelter this past weekend,” Warf said. “We do community service every week. There is a lot more to our fraternity than you might think.”

Rachel Riddle can be contacted at [email protected]