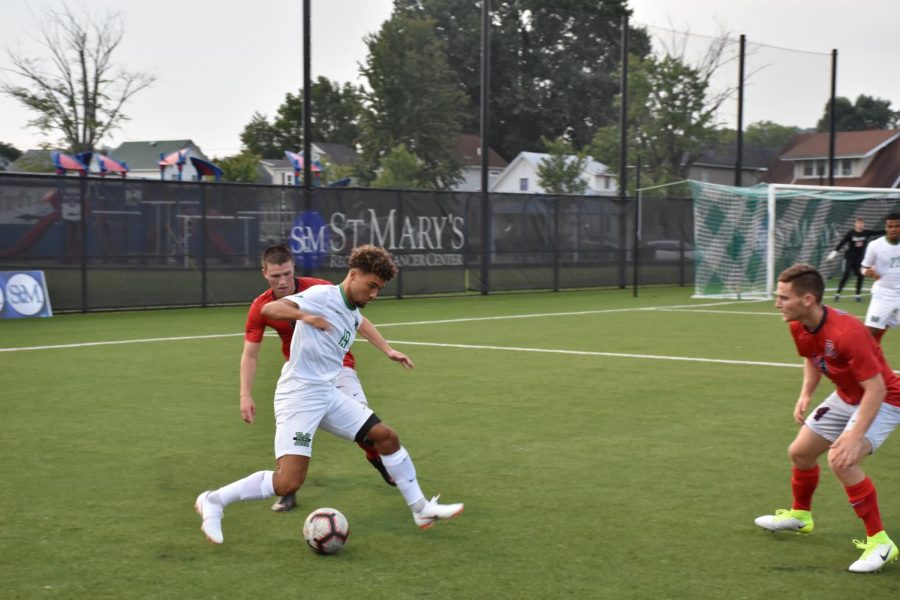 Marshall University men’s soccer scored early and kept Duquesne scoreless in its 2018 season opener, as it won 1-0 Friday night at Hoops Family Field.  The Herd is now 1-0-0 on the season, handing Duquesne (0-1-0) its first loss of the season.

“First three minutes I thought we played extremely well but we let off after the goal and we didn’t take our chances,” Marshall’s men soccer coach Chris Grassie said. “It would have been nice to see us finish the half a little more up but it is just a scrappy college performance.”

Junior midfielder Jonas Westmeyer scored the only goal for the Herd off a pass from far right to the middle from freshman forward Kelan Swales in the third minute of the game.  The goal was Westmeyer’s first as a member of the Herd.

“(Westmeyer) is a grad student and he has two years with us,” Grassie said. “He is a steady presence with us, he keeps the rhythm, his time in the box is really good. We started playing him a little more in the defensive midfield but we pushed him a little higher because he does make those runs into the box and get in some goal scoring opportunities.”

Red shirt junior goalkeeper Paulo Pita had one save for the Herd and sophomore midfielder Pedro Dolabella took six shots on goal. Overall, Marshall took 14 shots, with five shots on goal, while Duquesne had three shots with one shot on goal.

“I think that we are more confident, they know what is expected of them and they are more comfortable to take more risks with the ball and play under pressure,” Grassie said.

The Herd’s next match will be in Huntington Monday at 7 p.m. against Oakland.