The Settlement band to release new music, return to Huntington to perform 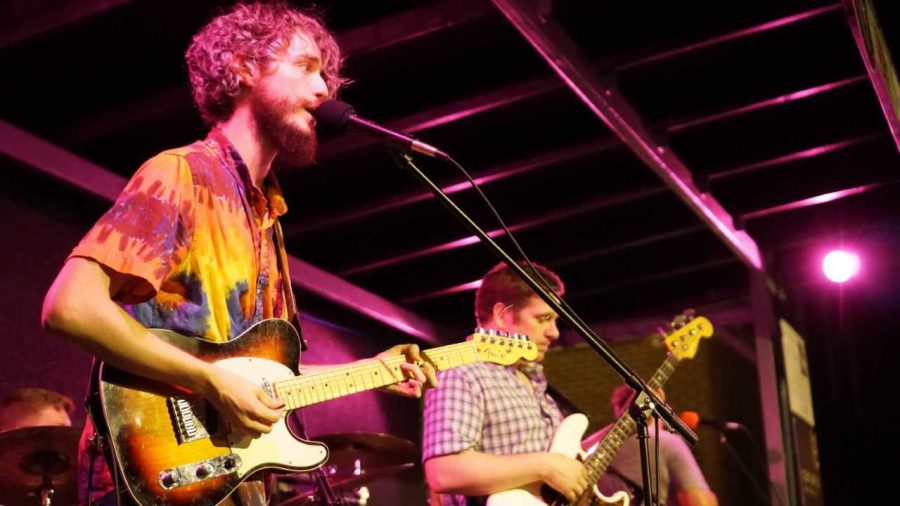 Photo courtesy of The Settlement

The Settlement may have over four years’ experience, but like a musical chameleon, the band’s style is only continuing to grow and change. Colten Settle, The Settlement’s lead guitarist, singer and founder, said he has been writing and playing music for years, and The Settlement was the result when two of his previous bands blended together.

“I had a band in high school called the Colten Settle Band that I formed when I was a junior, and I had people from back home that I went to school with and then people that I met here at Marshall University that play with me,” Settle, a Marshall graduate, said. “Then The Settlement formed out of the best members of those projects, like my Huntington band, my Williamstown band and those people who really wanted to do it formed together to form The Settlement. That’s kind of the point of the name, too, like not only is it my last name but it’s also an agreement, we’re all kind of compromising and sacrificing, that kind of thing. We all believe in the same common goal.”

The band is working to release two new singles. Settle said one of the singles is influenced by pop rock while the other has a more country music style. The Settlement previously released a self-titled album in September of 2016, with all original songs, and they recently recorded the two singles. The band’s music can be found on many music platforms including Apple Music, Amazon, Spotify and YouTube.

“Releasing our album was a big thing for us because we had about four or five sessions in recording it and then another several months of listening and mixing, just doing that back and forth,” Settle said. “So when we finally put it out, it was like a sigh of relief. That felt really good, like we did this, we worked on this together, we put it out and that was just kind of like a cornerstone, monumental thing that we did.”

With the release of the singles will come other new plans for the band including revamping their website and creating music videos for the singles as well as a short documentary promotional video, Settle said.

“We’re working on this mini doc promotional video, and working to supplement the singles and the website,” Settle said. “It’s kind of like getting all the plans in motion so we can plan even bigger and better next year. So, we can get a nice Electronic Press Kit and a nice website to reach out to more people.”

The Settlement’s sound is a mixture of all genres that influence its members, Settle said.

“We’re classified as a jam band, but we’re not just like making it up,” Settle said. “We do have some structures, we like to improvise, and we like to have fun creatively within other genres. So, sometimes it’s funk, sometimes its reggae. We’re definitely a mixture, but one thing we try to do is we try to approach, no matter what genre we play, or what song we’re playing, we try to approach it with the same kind of intent. Like let’s see how far we can stretch it, push it, speed it up, slow it down.”

Settle said some aspects of The Settlement that make the band stand out from other local bands include their set time, variety of songs and their use of different instruments.

“I would venture to say we probably have the longest songs in town,” Settle said. “We usually average about five or six songs an hour. Another thing is, a lot of bands, and there are a lot of great bands around here, spend most of their time trying to make it the same every time. They basically play it the way that it’s recorded on their album, and maybe they’ll have like a list of songs that they’re doing that they just released, so that’s what you’re going to hear when you go see them. I think something that’s different about us is some of these songs are 10 years old, so we’ve played them maybe hundreds of different ways. We also might throw in a song that we worked up two weeks ago that you’ve never heard before, we might play an old cover from the 40s, we might play a really old song that I wrote years ago. It’s going to be a mixed bag, it’s not going to be just one era. It’s going to be a time machine kind of thing. We’re also, I think, the only band in Huntington that has a trombone, a full-time trombonist, Alex Cardwell.”

Settle offered some advice for anyone interested in starting a band.

“Number one, I would say, is just be focused on whatever it is you want to do,” Settle said. “Don’t think about where you are now, think about where you want to be, set realistic goals for yourself to get to that point and hold yourself accountable to those goals. But be patient because you’re going to be let down and have a lot of doors slammed in your face. I can’t tell you how many times I call a venue or we send an email out to a festival and we don’t even hear anything back or we just hear an immediate ‘No.’ You have to be perseverant. Another thing is, nobody gets too old to practice. Just because you’re already all right doesn’t mean you should stop working on your craft and pushing your fellow band mates to be better and if they can’t handle that criticism and they don’t want to be better, then you should find new band mates. Try to find people that want to better themselves and want to see you get better. Take yourself out of your comfort zone and play with people that are better than you and you’ll learn something.”

This summer, The Settlement has been touring each weekend, playing a different show almost every Friday, Saturday and Sunday. Settle said starting in the fall, he would like to perform more shows in Huntington. Some of the venues The Settlement frequents include the V Club and Black Sheep Burritos while they play outdoor concerts at the Ritter Park amphitheater Heritage Station.

“Our next Huntington show is going to be August 11 at the V Club in Huntington,” Settle said. “And then our next Huntington show after that will be will be August 24 at Black Sheep. We’ll be playing September 29 at Funktafest which is a $10 all day festival, and if you go you get into the after party for free. We’ve got another 8 or 9 shows for the summer and then we’ll be doing a fall tour, announcing a fall tour in probably late August.”

Settle shared some of his favorite memories so far with The Settlement, including performing with blind local legend and musician Randy Gilkey and playing his guitar when Settle broke a string on his instrument.

“One of my favorite moments was back in April, The Settlement played a show with The M.F.B., and their guitar player was sick at the time, and they needed a guitar player, so I ended up being their sub guitar player for the night. The Settlement played a set, MFB played a set, the Settlement played a set, MFB played a set, and I just stayed on stage the whole night. Because I was playing so much, I broke a string during the second Settlement set, and without missing a beat, I put my guitar down and grabbed Randy’s guitar because he wasn’t up there at the time and started playing it, and then finished my set out. Well, when Randy got back on stage, I go to give him his guitar back and go to change my string, and I asked if he cared if I played his guitar for another song. He said, ‘Oh no man, that sounds killer.’ And so, hearing Randy Gilcky give me the seal of approval, ‘You sound great man, you can use my guitar.’ He actually sat in and played two songs with my band that night, so that was really awesome.”

Settle said he wanted to thank his fans for all their support over the years.

“I love you guys so much, you’re awesome,” Settle said. “Thank you for believing in us and keep coming out, invite your friends. If everybody invited one person, we’d double our numbers, you know? So, tell your friends, and we’re going to be putting out a lot of content for them.”