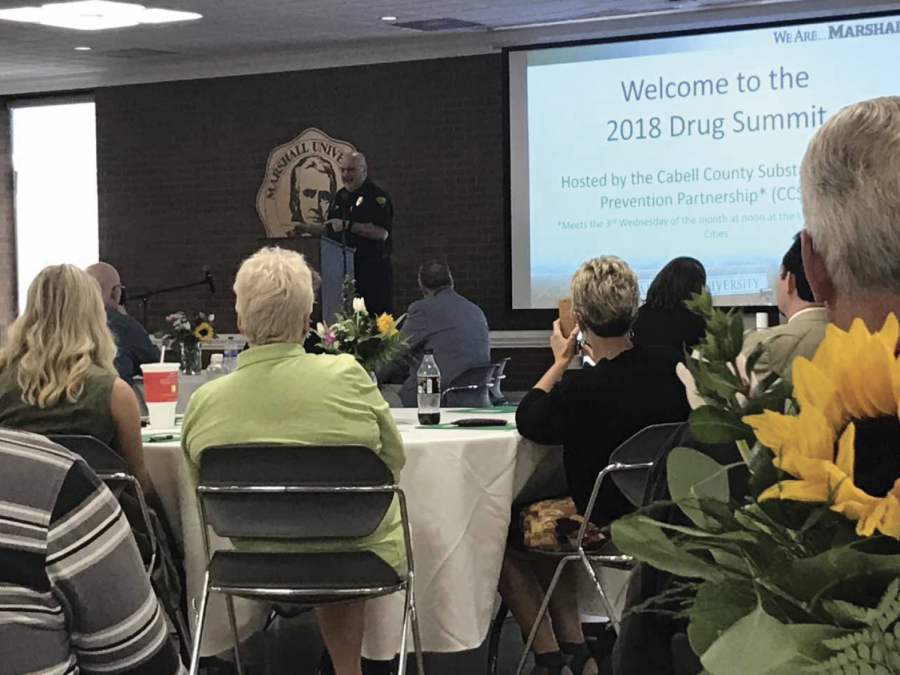 Huntington may have been voted America’s Best Community, but just like any city, it still faces many issues, most notably the opioid drug epidemic. For years, Huntington has been fighting the epidemic, but progress is being made, and that progress, as well as solutions and success stories, were all discussed during the 2018 Drug Prevention Summit in June.

Public officials and community members alike met to discuss ways they are combating the opioid epidemic in Huntington and surrounding areas. From Prestera Center creating a 16 bed medically supervised detox facility for addicts, to Cabell Huntington Hospital starting a harm reduction program and police organizing a Quick Response Team for overdoses, Huntington citizens are working hard to make positive changes. Among those in attendance at the Drug Summit was local legend Jan Rader.

Rader recently attended an opioid symposium sponsored by the National League of Cities, where six cities were represented, including Huntington. The main topic of the conference was how to decrease drug use, and Rader said she noticed one similarity between all six cities and how they are making a difference.

“All six cities had a strong faith community involvement in moving their communities forward in this epidemic that we’re dealing with,” Rader said. “I think that speaks volumes. We have a very strong faith community, with them we are so much stronger. They are our backbone. It’s a pleasure to be a part of the solution. This is just the beginning, let’s keep the positivity going. There’s so many naysayers; let’s squash them with our love and our kindness and our positive attitude.”

With the recent decision for police to no longer be the third agency to respond to non-life threatening overdose calls, Huntington Police Chief Hank Dial said it will free up resources, but police will respond if EMS needs them, the overdose is life threatening or if no one else is immediately available.

“Often we have overdose calls where EMS and fire would be responding, and then we would also respond,” Dial said. “So, we have three agencies going to do one thing; it’s just not a good use of resources. It will free up police officers to handle other problems. It should have no effect on the Narcan because we weren’t administering anyway. We’re not going on the ones where we’re observing someone administering, so it’ll free up police officers to do other things.”

Dial also gave a speech at the Drug Summit detailing the progress he has seen over the past year, including a reduction in Narcan usage, less needle litter and an overall decrease in the number of overdoses and violent crimes. Police have increased drug raids, enforcement and partnerships with the Attorney General and DEA offices.

“The role of problem identification has been filled,” Dial said. “We know what the problems are. I like finding solutions. As a matter of fact, our new slogan is ‘be part of the solution’ because we want problem solvers to come join us. When I became chief, the violent crime and opioid issues were on the top of my list. Either or solutions don’t work. A lot of people want to get lost in whether treatment is needed, or whether law enforcement is needed, or whether recovery is needed, if prevention is needed. There’s a simple answer and it is yes, they all are. Any drugs we can keep out of this city and keep from coming in here, getting folks evicted the first time, then that’s a win for us.”

“We have not seen our students use it, but if it impacts Huntington in any way, it affects us; we don’t see it in our student population,” Terry said. “What we have dealt with has not been students, they’ve been passing through or on our parking lot. The numbers are looking good at the start of this year, and I believe the university is taking a proactive role in it. We have committees, we have medical school researchers; everybody is coming together for this, so we’re attacking it as a community, not just Marshall.”

MUPD offers a variety of services for students to stay safe on campus, including a 24/7 escort service and emergency phones located at various locations across campus.

“For the students, we do the escort service in a limited geographical area on campus and surrounding us,” Terry said. “We won’t come get you, but we’ll come get you from the library to your residence hall and things of that nature. We have the emergency phones throughout campus, they’re green with blue lights. They’re wall mounted and in selected parking lots, there’s radio-controlled ones that come directly to us. Everyone has a cell phone, but if they call that phone, we’re coming to that phone.”

Terry said he wants MUPD to be accessible and for students to not be afraid to reach out.

“We’re a proactive and community police-based organization, so we want the students to come to us,” Terry said. “They don’t need to have a fear of that. We’re here to help, so keep them safe, that’s our prime mission. We want them to be comfortable with us so they can be able to come to us. We try to stay visible so we’re out there. We work with the city, and we work with anybody who helps us keep the students safe, but we’re hand in hand with the city. They’re doing the bulk of it because they’ve got a drug unit that’s not on our campus, but in the surrounding area they’ve been great. If we identify a problem area, they come right in and help us. It’s a partnership.”

Terry and Dial offered advice for how students can stay safe on campus.

“Be safe, look out for each other, don’t go into risky, sketchy situations,” Dial said. “Don’t be wandering around in public in an intoxicated state, don’t leave valuables in your car, lock your doors, use lighting, those things haven’t changed. Marshall students are just as safe today as they were when I went here in the late 80s.”