Phase One of all-inclusive playground is underway 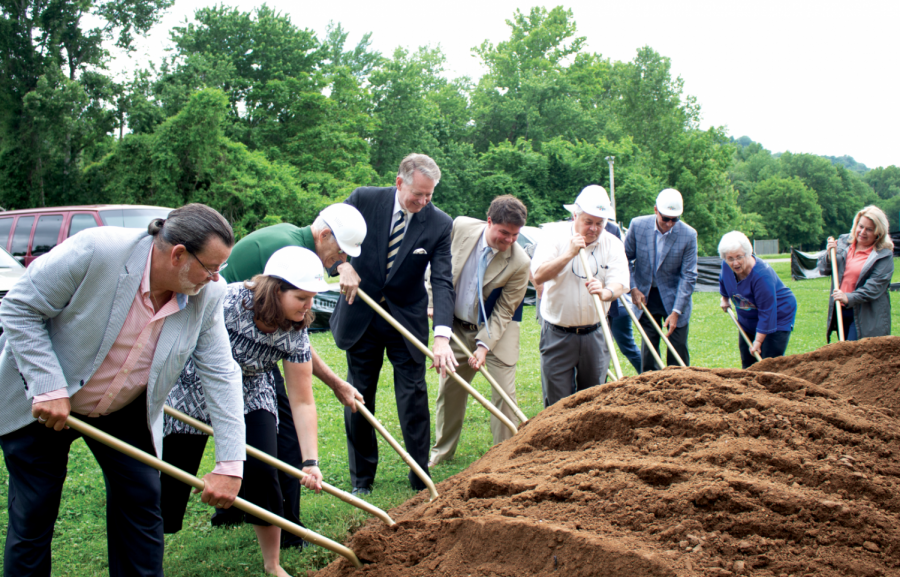 Huntington community leaders participate in a Groundbreaking Ceremony to begin Phase One of the all-inclusive playground at St. Cloud Commons.

Almost two years ago, the Greater Huntington Parks and Recreation District began the preliminary plans for an all-inclusive, all-access playground at St. Cloud Commons. The playground comes with the cost of $1.4 million, and Kevin Brady, the Executive Director of G.H.P.R.D., committed to starting Phase 1 of the project after reaching the funding halfway mark.

“We’re 5 points higher in this immediate area of people with disabilities of people between the ages of 5-21 than anyone in the nation,” Brady said. “We have the need. We have a desperate need here.”

The playground is meant to be accessible to children of all scopes of abilities, and Phase One will include the majority of inclusive play equipment surrounded by poured in place rubber surfacing. After Phase One is completed, all children of all abilities will have a place to play.

“I’ve been in the parks and rec business for 32 years and I’ve never been involved in a project that’s more rewarding and gratifying than this one,” Brady said.

Over the past two years, it has taken much time and commitment to funding this project, with G.H.P.R.D. Development and Recreation Manager Lauren Carte leading the way for fundraising through grant applications and community support.

“Two years ago I was introduce to a project that opened my eyes and touched my heart,” Carte said. “Some of my best childhood memories were made on a playground.”

For Carte, is important that every child has the same opportunities to make memories and friendships at the local playground that she was given in her childhood.

“The unfortunate reality is that many of our community’s children have never had the opportunity to make those same precious memories,” Carte said. “That will change with the addition of the St. Cloud’s all-inclusive playground.”

Mayor Steve Williams championed this park as one that will make Huntington a destination location.

“The one thing that we absolutely celebrate in this town is that all are included, that everybody is to be able to enjoy those things that life will bring,” Williams said.

“This is a project that makes sense, and we should do all in our power to make it more accessible for children to have access to play each and every day,” Jenkins wrote. “I look forward to seeing our community enjoy this park for years to come. All kids deserve a place to play and grow together.”

Additional phases of this project will include a fully accessible restroom facility with adult-sized changing tables, a parking lot and pathway expansion and more playground equipment.

Quoting Leslie Knope, a fictional character of NBC’s Parks and Rec, Carte said, “’If I seem too passionate, it’s because I care. If I come on strong, it’s because I feel strongly. And if I push too hard, it’s because things aren’t moving fast enough.’ So let’s show the world that play has no limits.”