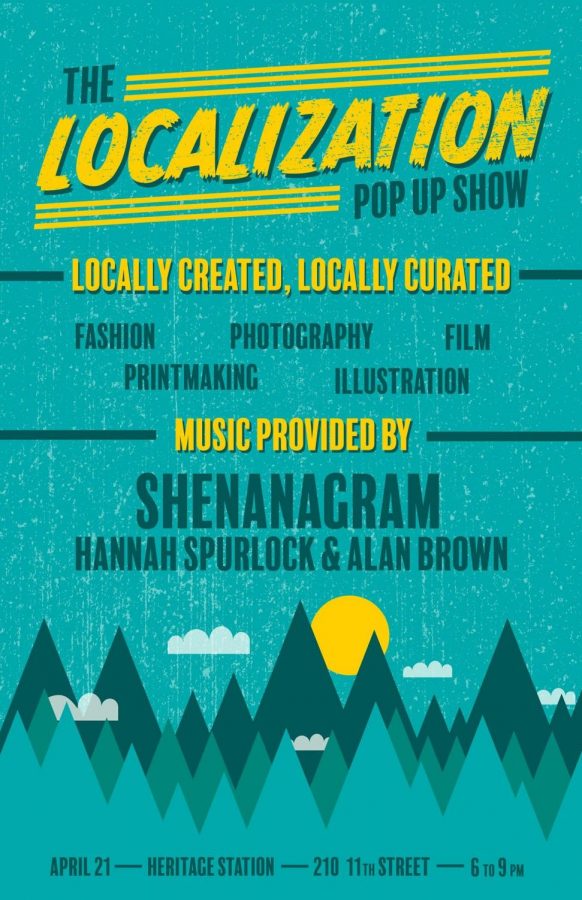 Poster of the event, designed by Heath Holley.

Founder and curator of the Localization movement Lilly Dyer, a junior photography major, is gathering 15 of Huntington’s local artists for a pop-up installation at the Heritage Station from 6-9 p.m. Saturday.

“Localization is a movement geared toward frequenting the public exposure of our area’s culture,” Dyer said. “Specifically, being aimed at are our musicians, our artists and our businesses.”

The pop-up installation will mark the beginning of the Localization movement. Dyer said she began this because she thinks there is a deep artistic culture that the public does not see.

“Localization’s goal is to project those talents into the public eye and help cultivate an art and music scene that can continue to grow rapidly,” Dyer said.

Dyer said there will be 15 artists of all mediums such as fashion, illustration, film and printmaking at the event.

“The Localization Pop Up and the movement, in general, feel very needed in our area to me,” Heath Holley, junior visual arts major and coordinator of Localization, said. “As someone who is active in our area’s music scene, it seems like the visual arts, as well as other aspects of the area’s culture, go relatively unnoticed. I’m excited for a reoccurring event to bring other areas of the arts into light and for people to be able to reference local visual artists as easily as they can often reference local musical artists, but also, to bring light to those musical artists that haven’t yet broken out as common names in the community.”

Hannah Spurlock and Alan Brown from The Dividends will be opening for the headliners Shenanagram.

Dyer said this is an opportunity to get Huntington involved with the community around them.

“I see too often the people demand culture, arts and entertainment from Huntington, and as artists and business owners, we have given what the people have asked for,” Dyer said. “But in return, the same people who demand these things from the community aren’t the ones supporting it.”

Localization is meant to gain the support from the community for the local artists, Dyer said.

“I want to see Huntington continue to thrive in every way that it can, and I’m fighting to keep it this way,” Dyer said. “I want everyone to see that you don’t have to be in a huge city to be successful. We all make up Huntington, and the only way to have it continue to grow is participation.”

Hunter Way, junior video production major and co-creator of the Localization magazine that will be introduced at the event, said he hopes the movement will continue to foster a more positive outlook of Huntington.

“Huntington, as a whole, is only seen on the surface level as a place that is limited to what it currently holds and what it can do,” Way said. “People really get hung up on the ugly and depressing parts of our city and not focus enough on the future and what we can really blossom to be. Having younger people create these influential events is only a surefire sign that Huntington isn’t done growing.”

Michaela Crittenden can be contacted at [email protected]marshall.edu.