Marshall walks a mile in her shoes 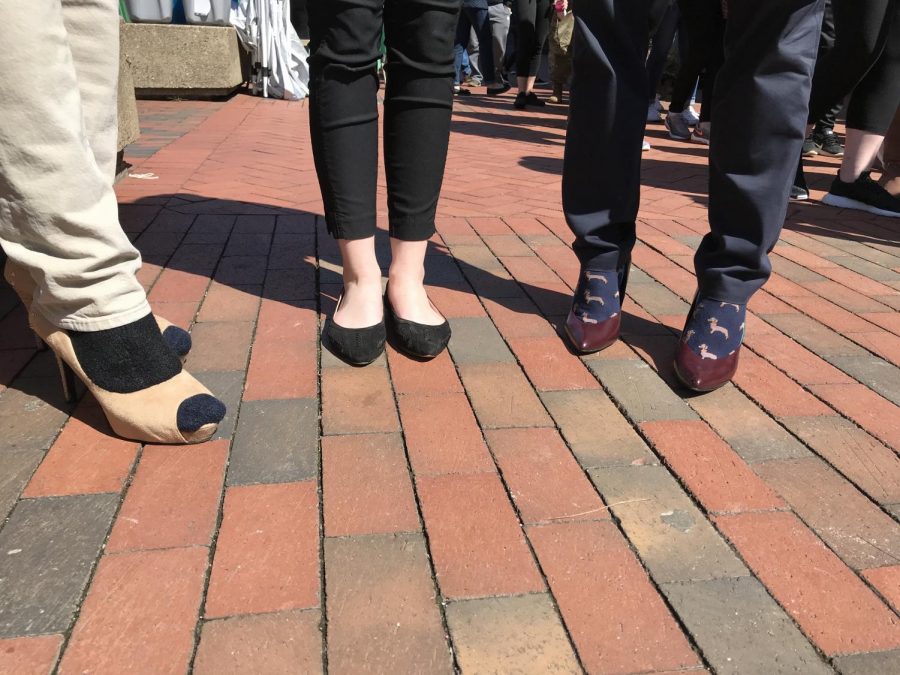 Marshall University’s campus thundered with the sound of heels clicking during the Walk a Mile in Her Shoes event Thursday.

“Walk a Mile in Her Shoes is an event to promote sexual assault awareness and to stop violence against women,” junior elementary education major and Interfraternity Council Vice President of philanthropy Andrew Hupp said.

Marshall’s Fraternity and Sorority Life, the Women’s Center, CONTACT Rape Crisis Center and the Interfraternity Council sponsored their annual Walk a Mile in Her Shoes event where male students and Marshall University’s Police Department walked a mile around campus
in heels.

“Women’s voices can sometimes be seen as lesser than a man’s voice, so to see IFC and so many other organizations out here advocating for women makes me happy,” sophomore public relations major Kathryn Deaton said.

Organizations like Branches Domestic Violence Shelter, WMUL and the LGBTQ+ office tabled at the Memorial Student Center in support of the walk.

“This is one of the most important events we attend on campus, because it is directly about violence against women,” Sara Blevins, developmental director of Branches Domestic Violence Shelter said.

Sorority Alpha Xi Delta had a table where community members could paint their hands red and stamp them on a paper to show their support.

“Your hand print shows your support and that you stand with women,” Deaton said.

CONTACT also set up a table on the plaza.

“Our main focus was on consent, we really want people to get consent rather than saying she asked for it,” Jackie Wheeler, campus victim advocate at CONTACT said.

Mayor of Huntington Steve Williams spoke about domestic violence and sexual assault before the walk.

“We are a community of compassion,” Williams said. “Though we are small in numbers, we are giants in spirit.”

Many fraternity members and a few members of MUPD dawned heels to walk for women.

“I feel awareness should be brought up more; it seems that everyone talks about it, but no one really does anything about these issues,” sophomore public health and health sciences major Brian Schleicher said.

Those in attendance said they felt the importance of discussing sexual assault and violence against women.

“Sexual assault against women will not be tolerated on Marshall’s campus or in the city of Huntington, and it will be led by those of us who are sons and daughters of Marshall,” Williams said.

Michaela Crittenden can be contacted at [email protected]