Activists take to streets at March for Our Lives in Huntington 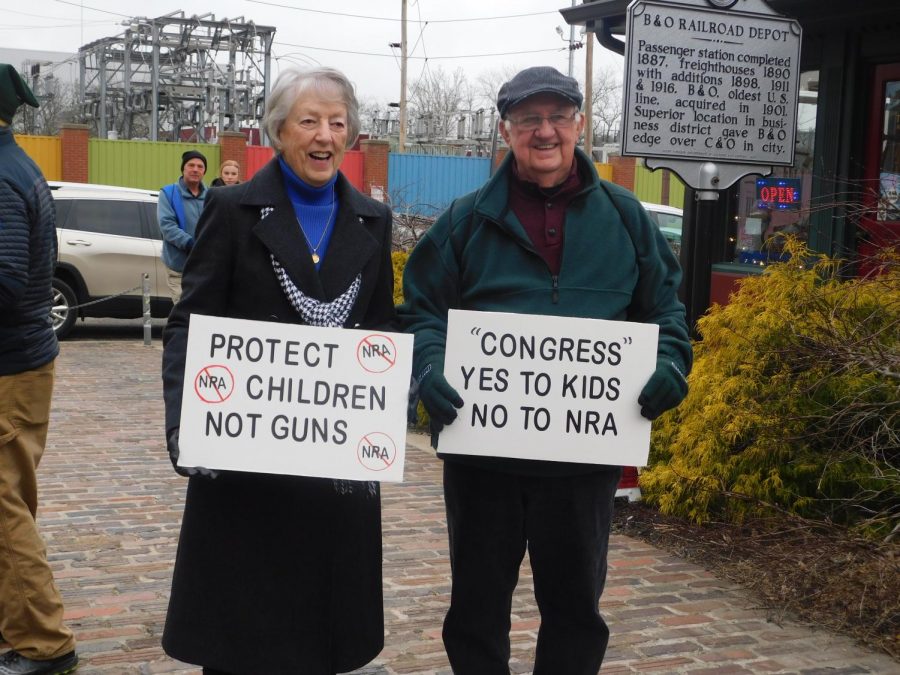 Activists of all ages charged proudly through Huntington Saturday morning as part of the March for Our Lives movement which took place all across the country.

Participants marched in honor of the 17 victims killed in the Parkland shooting last month and to fight for more comprehensive gun control laws throughout the country in attempt to prevent another mass shooting from occurring.

John Prentice, a participant in the March for Our Lives event, said protests and rallies like these are the only way to create real change on pressing issues.

“No one is going to listen and no action is going to happen unless you speak up,” Prentice said. “We are one of the only developed countries where we don’t have comprehensive gun control and where this is still a major issue.”

Prentice said the answer to gun violence is very clear in the form of gun control reform.

Attendee Amanda Day-Brown said she has family who is school faculty and a nephew who is 10 years old, which makes the issue of gun control extremely important to her personally.

“I’m an older millennial, and I remember Columbine, watching that on television, and over the years it’s continually gotten worse,” Day-Brown said. “It’s to the point where it’s climaxed, and we’re to the point where we’ve got to have some action.”

Rileigh Smirl, student organizer of the Huntington-based march, said growing up in today’s society means knowing the fear that accompanies walking into school, but said it doesn’t have to be this way.

“Here we are, 19 years since Columbine, six years since Sandy Hook, less than a year since the deadliest mass shooting in United States history in Las Vegas, and another 17 people have died at the hands of gun violence in our country,” Smirl said. “Some of these people were teenagers just like me; they woke up on that Valentine’s Day and probably had the same thoughts I do in the mornings before school, wishing for more sleep and already counting down the minutes until they get to come back home. Yet 14 students and three teachers did not get to come back home that day.”

Smirl said she hopes to reach teenagers and adults who can vote in the next election in order for a change in policy to be put into place.

“I want to show our lawmakers that there are hundreds and thousands of us across this nation begging for change, saying that enough is enough and that we will do whatever it takes to ensure that the next generation of teenagers will not have to put their lives on the line when they walk into school every day in order for something to change,” Smirl said. “For centuries we have built a crucial part of our nation’s foundation on that 2nd Amendment in the Constitution, yet I believe that our founding fathers had a very different idea in mind when they wrote that Americans have the right to a well-regulated militia.”

Smirl said over the years the gun-culture in America has become increasingly frightening.

“Now instead of practicing tornado drills, we prepare for an active shooter; tornados are unstoppable natural disasters that we have to brace for and do what we can to keep ourselves safe and minimize the damage, because it is something we cannot prevent,” Smirl said. “Shootings are not natural disasters. They are not inevitable and they are preventable.”

Smirl and the March for Our Lives movement called for a ban on semi-automatic weapons in the United States.

“I am not here to ask for a ban on all guns across this nation,” Smirl said. “What I want to know is the purpose of semi-automatic weapons being readily available to practically anyone who wants one.”

Smirl said lawful gun owners should not be opposed to keeping guns out of the hands of those who only have deadly intentions for purchasing them.

“If the guns used in all of our most recent and deadly shootings were legally obtained, then the problem lies in the way our laws allow people to buy guns,” Smirl said. “My hope for the future is that one day I hope I can look at my children and feel safe sending them to school, knowing that changes have been made so their lives in school are safer than mine is as a high school student today.”