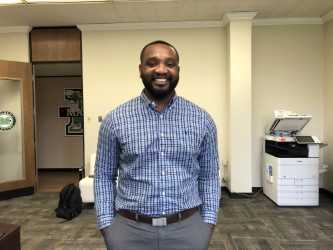 Nick Wright is one of the many new faculty members at Marshall University this semester as the first official director of Fraternity and Sorority Life. With a background in both public health and Greek Life, the new director said he has high hopes for the Greek community here at Marshall.

Wright was born and raised in Horsenation, Mississippi, which he describes as a small town in the middle of nowhere. He was raised by a single mom and was always taught to be true to himself.

Wright is a graduate from Mississippi University for Women with a master’s degree is public health. He continued his education in Indiana to get his graduate degree.

After graduation, he started working at Eastern Illinois University and obtained a position working with the school’s Greek community. His job at the school was to help coordinate events between different Greek organizations as well as make sure everything was running smoothly.

Wright said he spent a lot of time looking at different job openings that he is interested in filling, checking the requirements each position asked for and would apply if he was interested. If there was a position he was interested in but did not qualify for, he would often ask his boss and mentor what they could do so he could acquire the necessary skills.

The now director of Fraternity and Sorority Life said he actually applied for the job as a fluke. Wright said he saw the opening for a director here at Marshall and told his friends about it. While Wright said he did not expect to get accepted, he had submitted his application and then was looking for apartments all within three weeks.

Wright said he loves working with the Greek community because he himself comes from a Greek background. The now director became a member of Phi Beta Sigma when he was in college. Wright said he originally had no intention on joining any fraternity. However, after seeing the organization do different events around campus, he decided that maybe Greek Life was for him.

Wright still says he is not sure what it was that made him decide to join the fraternity, but he does know why he stayed–his fraternity’s cohesive effort to do well in school and the community had a positive impact on him.

“When it came down to academics,” Wright said, “everyone was very intelligent. We pushed each other to work hard and succeeded together.”

Wright said he believes the position is great for him because he is able to relate to the students who are active members. He said he is capable of understanding different Greek organizations’ points of view because he grew up with similar situations.

Wright has already been working with the Greek Council as well as different task forces to ensure the safety of Marshall students when participating in Greek Life events.

Wright said he wants to work toward enhancing the relationships between students and university support. He said he hopes to do this by letting the students help create and build the community primarily by themselves.

Wright said he believes being the first official director of Fraternity and Sorority Life allows him to help the students shape the community they hope to build rather than coming into a position where rules and regulations have already been established.

Wright reflected on what he describes as a great experience in college with his own Greek community, and he said he believes each person deserves to have that experience, and he thinks Marshall is a great place to have all of the experiences that come with Greek Life.

“I don’t want to give people my experience,” Wright said. “I want them to have the experience they want to have. Being here at Marshall allows me to be the catalyst, or middleman, for the students.”

Wright said that he hopes Marshall can become one of the nation’s best Greek communities. He said he is very hopeful that the community will only get better as time goes on due to working together on different communication skills and holding each other accountable for different actions.

The director said he hopes to maybe one day be the president of a university, as well as charter a school for underprivileged children in Mississippi. He also said he would like to start a family one day.