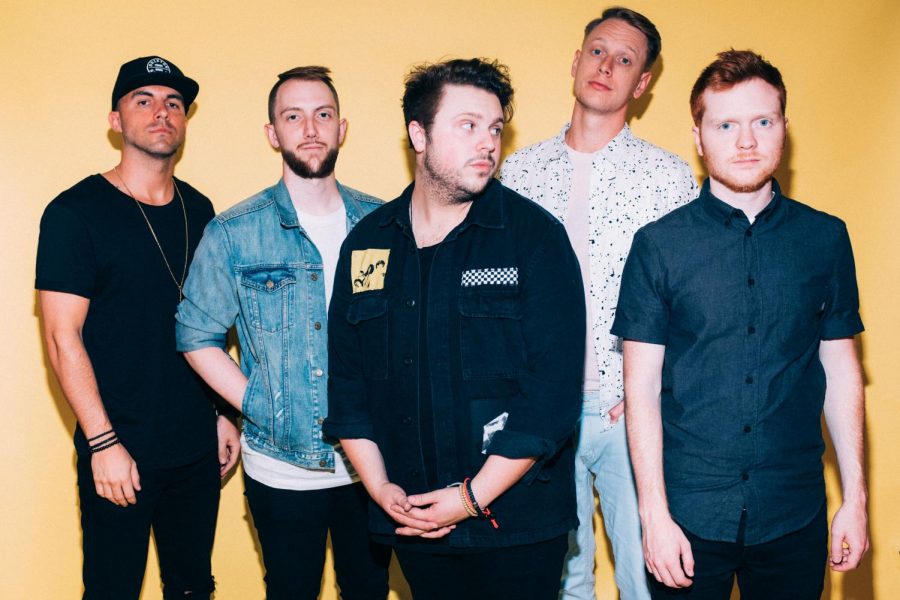 (Left to right) Members of A Story Told, Jason Lieser, Casey Hardman, Alex Chaney, Zach Holley and Josh Allen, are kicking off their tour in Columbus, Ohio this Saturday, making a pit-stop in Huntington at the V Club March 24.

While most twenty-somethings from West Virginia are beginning to settle down with a steady job, local pop-rock band A Story Told is embarking on a 10-day tour this weekend for their second album “Good Looks,” which was released last fall.

Even after the release of an EP, two full-length albums and the opportunity to play at the Vans Warped Tour since the band’s formation in 2014, the members of the Charleston-based band said they are still hungry for more.

“We’re never settled or pleased,” guitarist Josh Allen said. “We always want to work harder and accomplish more, and I think that’s why we are where we are today.”

Allen grew up in a musical family, but said that early 2000’s pop-punk music inspired him to become more involved and eventually pushed him to help form the group.

“It made being in a garage band and turning it into a career a reality, so I think that’s why I was drawn to it,” Allen said. “Ever since then, I’ve picked up every instrument I could and tried to learn it and tried to learn how to write songs and eventually started in bands, and now I’m here.”

Alex Chaney, lead vocalist for A Story Told, had a different experience and said he never considered joining a band until later in life.

“I grew up in church my mom loves gospel music, so that was kind of my first introduction to music,” Chaney said. “I was trained in piano with lessons, you know that kind of upbringing. We were into Backstreet Boys and all that stuff, but I don’t think a band was ever on my radar.”

Chaney studied music education in college but quit after a short time, knowing he wanted to be part of the music world but not necessarily teaching it.

“I knew Josh was in a band and he talked about me singing for it,” Chaney said. “I joined after, like, two shows.”

Allen and Chaney said finding a group of people that were on the same page in the local music scene was difficult.

“We were all in previous local bands, and local bands come and go so quick, you know, there’s people that aren’t serious and then people that are serious, so we basically kind of made a super-group of people that wanted to pursue music further once those bands broke up,” Allen said. “We all just found common ground with a certain style of music, a certain passion and a certain goal.”

Allen said exploring the different paths life has to offer inspired the band’s most recent album.

“Getting a job, getting married, having kids, that’s an awesome life, but you know, right now we want to pursue music full-time and just because it’s different doesn’t make it the wrong thing,” Allen said. “We’re really trying to shed light on that area, that you can do whatever you want, don’t let where you’re from hold you back, or any situation hold you back. You just always have to go with what you feel is right and don’t let other people change that for you.”

A Story Told operates completely on their own, unlike some other groups or musicians who rely on others to produce their music.

“We’ve never had a record label, we’ve never had many outside people telling us what to do or how to do it, or giving us a bunch of money to do it,” Allen said. “It’s all really just been the five of us and our love for what we do. We’ve really built something from the ground up, there’s been no manufacturing of it, it’s not a product, we’ve done it ourselves. I’m extremely proud of that.”

Chaney said there have been many instances where he feels the band should have failed but instead persevered and became even more successful.

“A lot of scenarios and instances we should’ve failed, or it would make sense that it would be the moment that we stopped or didn’t succeed because it seems like so much was against us,” Chaney said. “On top of working full-time jobs, it is hard. I mean it’s great that we could accomplish it at all. How many people have had a rock band here and have gone on tour? You know, it just doesn’t happen.”

The band’s first experience touring for more than just a few days at a time came following the release of “Good Looks.”

“We were really excited but also really nervous to see how we would handle 10 days,” Chaney said. “On tour there is a lot of down time and a lot of strange time, kind of in between time, so honestly the performances night in and night out, that’s the most exciting thing.”

Chaney said one of the best things about touring is building a fan base in different areas.

“You start hitting cities that you’ve played before, you start a fan base there, and it’s cool to go and see people in specific cities,” Chaney said. “I think that’s the coolest thing. It’s an opportunity to show them how we’ve grown but also see how they’ve grown with our band as well and for us to all experience it at the same time.”

Allen said this tour specifically hits a few stops that the band has not yet played their new music for.

“We’re going out for 10 days straight,” Allen said. “We’re hitting a lot of cities that we’ve been to in the past but we haven’t been to since we put out our latest record, so I’m definitely excited to get to those familiar cities and play new material, and show people how much we’ve grown.”

The tour will kick-off in Columbus, Ohio, this Saturday and will make a pit-stop in Huntington at the V Club on March 24.

Allen said the band will continue to work hard and break new boundaries.

“We’ll never grasp how big it is,” Allen said. “We’ve just had our heads down and worked as hard as we could. But, I think the goal for this is to make this a full-time thing and make this our life, and we’re still working toward that goal.”