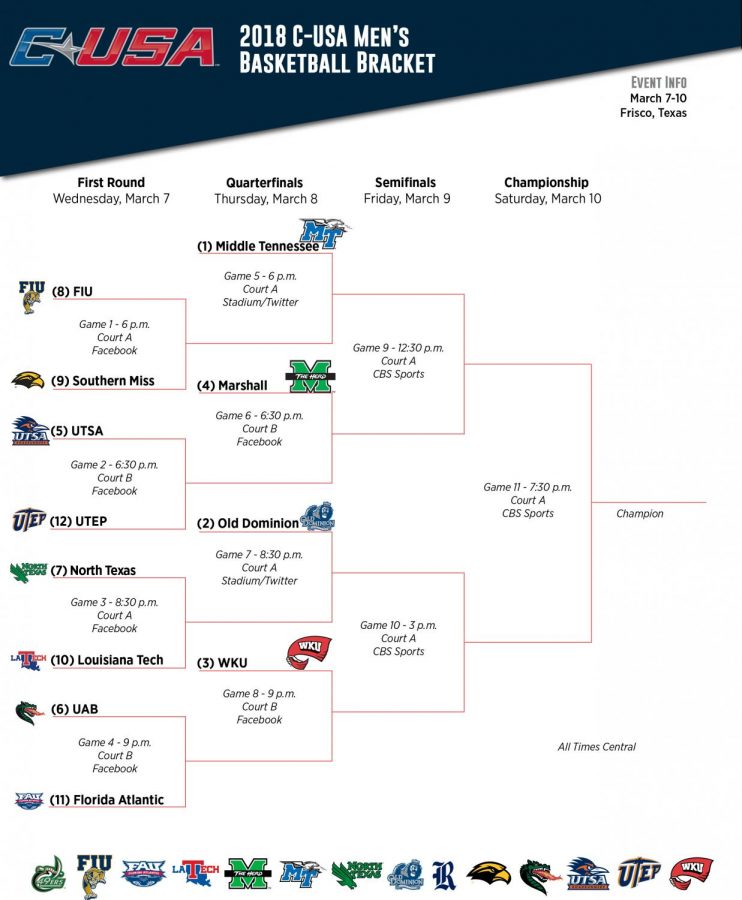 The official bracket for this year's Conference USA Men's Basketball Tournament. The 12 competing teams have open practices at the Ford Center at the Star Tuesday, with first round action beginning Wednesday.

Marshall men’s basketball competes in the Conference USA Men’s Basketball Championship Tournament this week at the Ford Center at the Star in Frisco, Texas. After closing out the regular season with a 76-67 win over then-No. 24 Middle Tennessee, the Herd edged UTSA for the fourth seed and a guaranteed first-round bye into the quarterfinal.

“I might have had a heart attack if we lost that (game) and knew UTSA won their game, but I don’t have to worry about that,” Thundering Herd head coach Dan D’Antoni said. “The kids were super and played extremely hard. Middle (Tennessee) is so well-coached, and they play so hard. Even if they make a mistake, they make you pay for one right after that. They are very deserving of a top 25 spot.”

Last season, Marshall did not have a bye in the C-USA tournament and won three games in as many days to advance to the tournament championship game. However, the Herd fell to the Blue Raiders 83-72 in the championship. This year, though, Marshall swept Middle Tennessee in the regular season.

With the fourth seed, the Herd will have to win two games—the quarterfinal and semifinal—to reach the final. In the quarterfinal, Marshall will play either UTSA or UTEP (whichever team wins the first-round matchup) Thursday at 7:30 p.m. Marshall lost to UTSA and beat UTEP in the regular season, with both games being on the road.

The 12-team field was finalized after the conclusion of Saturday’s C-USA games. The back-to-back C-USA champion MTSU won the regular season title and earned the first seed. MTSU is followed by Old Dominion, Western Kentucky and Marshall at second, third and fourth, respectively. ODU and WKU flipped seeding positions after WKU lost to UAB Saturday. Seeds five through twelve will play in the first round Wednesday evening for a chance to advance in the single-elimination tournament. Charlotte and Rice will not travel to Frisco after finishing at the bottom of the conference standings.

After three consecutive years in Birmingham, Alabama, the tournament venue moves southwest to Frisco, Texas’ Ford Center at the Star: the practice facility and world headquarters of the NFL’s Dallas Cowboys. The facility, which houses an indoor, NFL regulation size football field, will be converted into two basketball courts.

“I always say, Frisco is the number one innovative city in the world,” Frisco mayor Maher Maso said in a release. “We’re so excited to have these teams here. We’ll make the same commitment we made to the NCAA (FCS) championships, and that is, to make it a very special event for the student-athletes.”

The championship-winning team receives an automatic bid to the NCAA Men’s Basketball Tournament—a feat that Marshall hasn’t accomplished since 1987.

Luke Creasy can be contacted at [email protected]