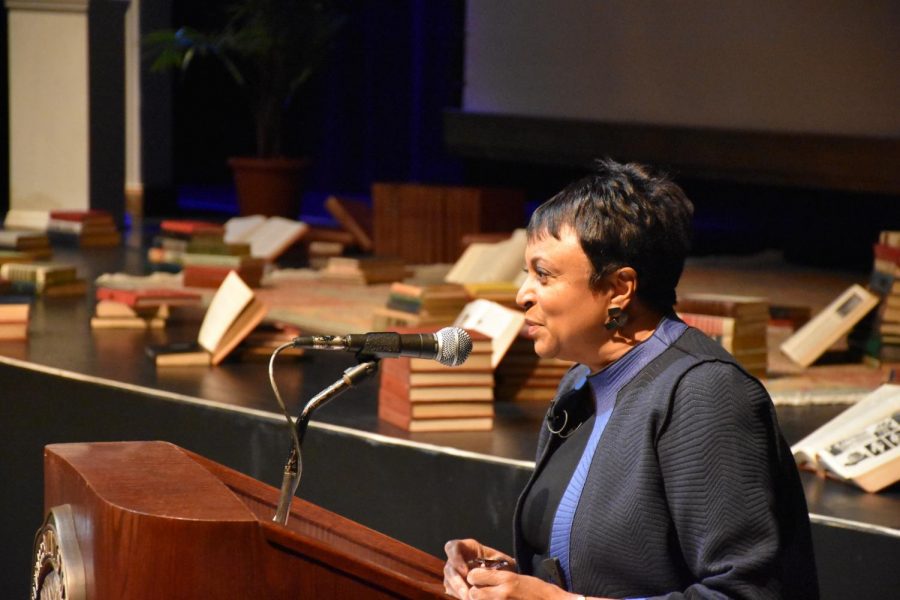 Along with her contribution to Black History Month

Hayden, the fourteenth Librarian of Congress, was sworn in September 2016 by President Barack Obama as both the first female and first African American to hold the position.

U.S. Senator Shelly Moore Capito introduced Hayden at the event and said she is extremely well thought of in the community of librarians and educators as well as within politics.

“Dr. Hayden helps my staff and all of our staff on capitol hill to become informed and serve not just West Virginians, but the rest of the nation effectively and ambitiously, and I can’t thank you enough for that,” Capito said. “It’s fitting that Dr. Hayden is here to celebrate the father of Black History Month.”

Hayden said that West Virginia has a very strong librarian community and that Marshall University is one of the only colleges that honors the legacy of Carter G. Woodson. Hayden said she feels a personal connection to Huntington native Woodson, who founded Negro History Week in 1926.

“We proved so influential that it turned into a month,” Hayden said.

Hayden said thinking about what she could bring to African-American history and Woodson was a major part of her personal and professional life.

“When I started out at the Chicago Public Library, I was fortunate enough to work at the first regional library, the Carter G. Woodson Regional Library,” Hayden said. “That’s when I really learned about Carter G. Woodson.”

Hayden said Woodson realized the power of public relations and the press and knew that it was an important vehicle to get black history into the public eye.

Mayor of Huntington Steve Williams also spoke to guests at the event and said the community has a responsibility to own Black History Month in every way possible.

The Library of Congress is the largest library in the world and holds a vast collection of African-American history, but Hayden said man do not know there is a separate section for these treasures.

“That’s due to Dr. Woodson’s legacy and inspiration,” Hayden said. “He felt that as we celebrate history and all of the contributions, we should also know that black history is American history. It should be woven throughout, and so, at the Library of Congress, the treasures that we have related to African-American history and culture are interwoven throughout the library.”

Hayden said her and the staff at the Library of Congress are working hard to make sure these collections are digitized and accessible to everyone.

Hayden said she is also working to help young people stay engaged with history, specifically that of African-Americans.

“We have an opportunity now to, at this moment in time, to have young people touch history and make it come alive,” Hayden said.

Hayden said one of the best connections made recently with young people and African-American history is the release of the Marvel film “Black Panther,” which is based on comic books.

“So many young people are going to it,” Hayden said. “When the movie came out, of course, we tweeted about the first edition.”

Hayden said the library holds the largest collection of comic books, maps, founding documents, papers from past presidents and works of the greats such as Frederick Douglas and Huntington’s own Woodson.

Hayden said while growing up she didn’t have much black history in school, only the fact that blacks were involved with slavery.

“That was the only thing they knew about American history that had African-Americans in it,” Hayden said. “When you think about what we are now celebrating, in terms of black history and Carter Woodson’s legacy, it is truly significant.”

Hayden said being a descendant of those who were denied the right to read is also very important when considering the role she now plays at the Library of Congress.

Although Hayden is a pioneer in her field, she said there is still work to be done and discoveries to be made.

Hayden said Woodson’s legacy, particularly in Huntington, should be embraced and kept alive as well.