Mayor Williams delivers State of the City Address: Talks past deficits, successes and hopefulness for the future 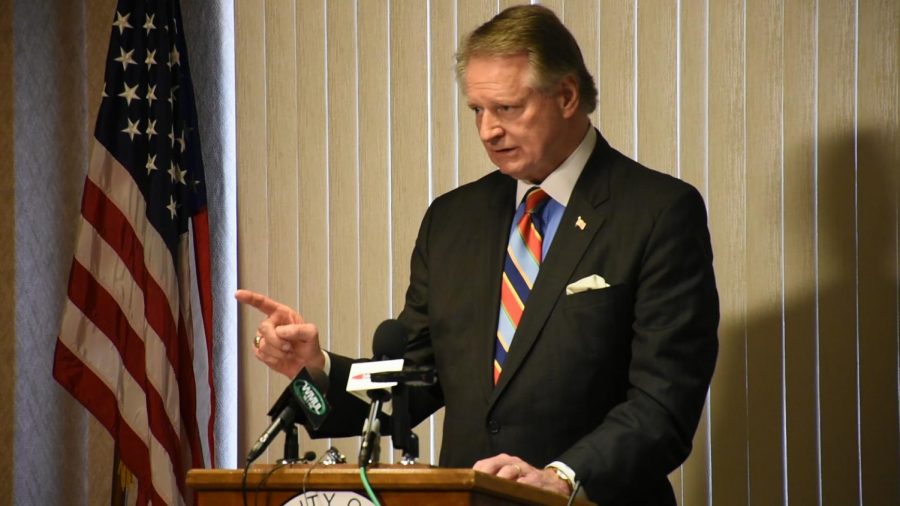 Charles Dickens’ novel “A Tale of Two Cities,” has become synonymous with the passage that begins with, “it was the best of times, it was the worst of times.” It was this sentence that Huntington Mayor Steve Williams made apparent during Thursday’s State of the City Address.

Williams made it clear that Huntington’s past year can be best described by Dickens’ famous words. In the past year Huntington faced a large budget deficit and cuts to both the Huntington Police and Fire departments. In that same year, Huntington was also named ‘America’s Best Community,’ and received a grant of $3 million.

“2017 began with us facing an unexpected projected budget deficit,” Williams said. “We addressed this crisis by making unpopular but necessary decisions.”

Those decisions resulted in cuts to the police and fire department leaving 24 city employees without jobs. Williams said the result of the 2017 budget deficit’s decrease came after those reductions. In 2017, Williams projected the deficit would drop by $2.2 million.

“We finished the year in the black, without raising fees or taxes,” Williams said. “Without depleting our reserve funds, with a surplus, and by offering every professional employee who lost their job the opportunity to return.”

“Last year when we came in here we were $5 million in the hole,” City Council member Charles McComas said. “This year is different. He is planning on bringing back more policemen, firefighters and firetrucks. I’m interested in looking over the budget, but I think he’s done a good job.”

The budget does not specify an addition to fire vehicles but, it does plan on adding five new officers, five new police vehicles in the 2019 fiscal year and five the year after that.  With this new funding to the police and fire department, Interim Police Chief Hank Dial said this funding will help provide a stronger police presence throughout the city.

“We’ll be able to put [officers] back into investigative roles that are necessary for properly policing the city,” Dial said. “That investment in our fleet will go a long way toward making sure that we can do our jobs day in and day out.”

One of Mayor Williams most poignant moments during the speech was addressing the perception of safety in Huntington and what it means for not only Huntington citizens, but Marshall University students as well.

“We cannot and should not ignore the perception that questions Huntington’s safety,” Williams said. “Downtown Huntington is safe. The students who attend Marshall University are safe. All who visit our town are safe.”

Part of those duties of keeping the city safe entail addressing the drug epidemic that continues to grow in Huntington. Williams had very strong feelings toward the stigma Huntington has been given due to the rise in opiates.

He continued by saying that Huntington is more affected by the “disease of hopelessness” than drugs, attributing this hopelessness to the lack of economic opportunity.

One of those changes to Huntington’s economy will be the addition of the open-space retail facility on 3rd Avenue, The Market.

As for funding the drug crisis, Williams said that he wants to see more funding from Charleston and Washington D.C.

“We must have state and federal partners,” Williams said. “If indeed this is as high priority as our leaders in Charleston and Washington exclaim, then show us the money. We cannot be expected to overcome this by ourselves.”

Williams finished his address by continuing to push for his agenda and “faith” in that mission.

“We have learned mighty lessons this past year,” Williams said. “We have learned that we can compete with anyone in the nation. We have the expertise and fortitude to set a path of success if we simply dare to have faith in our ability to prevail.”