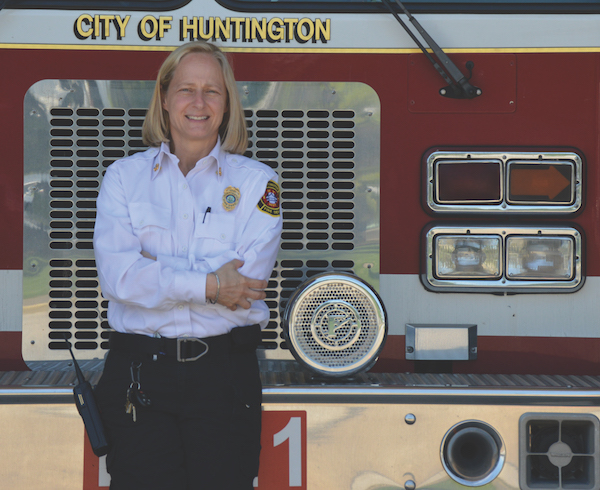 Rader stands in front of a Huntington fire engine.

The Fighting Addiction club will present a student led panel discussion on the effects of addiction at 7 p.m. April 5 in the Don Morris Room. Among the panelists are Jan Rader, Huntington’s fire chief, Chris White, a history professor at Marshall University who teaches a class about the drug wars, Richard Egleton, a pharmacologist, and Bernard Slater, a recovering drug addict.

Fighting Addiction members said the main goal of their organization is to educate the public about the drug addiction issue, and they said they hope the panel will be informative, as it is their biggest event of the semester.

“Our plan so far is to educate other students on campus,” Tyler Skidmore, vice president of the club, said. “So, we have this panel discussion that’s going to be on campus with hopefully a large group of Marshall students, and we want to have a wide variety of people. Hopefully we can give students a lot of different perspectives on what’s going on and what they think is going to happen in the future. That’s our main focus in terms of this semester. A lot of what we plan to do is just educate people.”

Skidmore and Mouhammed Sakkal worked together to create the group last fall.

“We want to target the issue from a multitude of aspects,” Sakkal, second year medical student, said. “Of course, they say education is one of the best ways to target it and hopefully from a political aspect as well. One of the main things we did so far was we met with the mayor’s office for drug control policy. They educated us about the issue more. Putting our heads together to think of what we can do as students at this point in our lives is the main thing.”

Fighting Addiction has more plans for the future as well, members said, including a philanthropy dinner with Recovery Point, a rehabilitation center in Huntington and supporting elementary school students who have family members dealing with addiction.

“We had this idea to support families of recovering drug abusers by targeting elementary age kids; we just want to support the families too,” Taylor Adkins, junior biology major and Fighting Addiction member, said.

Sakkal said there is no other program in the community similar to what they are doing.

“If the parents are drug abusers, we want to create some kind of net for kids to keep track of them, support them financially and make sure they get through life and school fine,” Sakkal said. “There’s not anything really like that up to this point.”

Members said they were partially inspired to create the group because they see the effects of drug addiction everywhere.

“I went to undergrad here, so I’ve been here in Huntington for about six years; it’s really became a priority for me just because I’ve been around it so much,” Skidmore said. “It’s amazing that there’s nothing on campus like this yet. Because this is an issue that’s engulfing the country and especially this state and this town in particular. I think we’re just trying to fill that niche of educating the students because they come from all over, they may not be aware of how big a problem it is.”