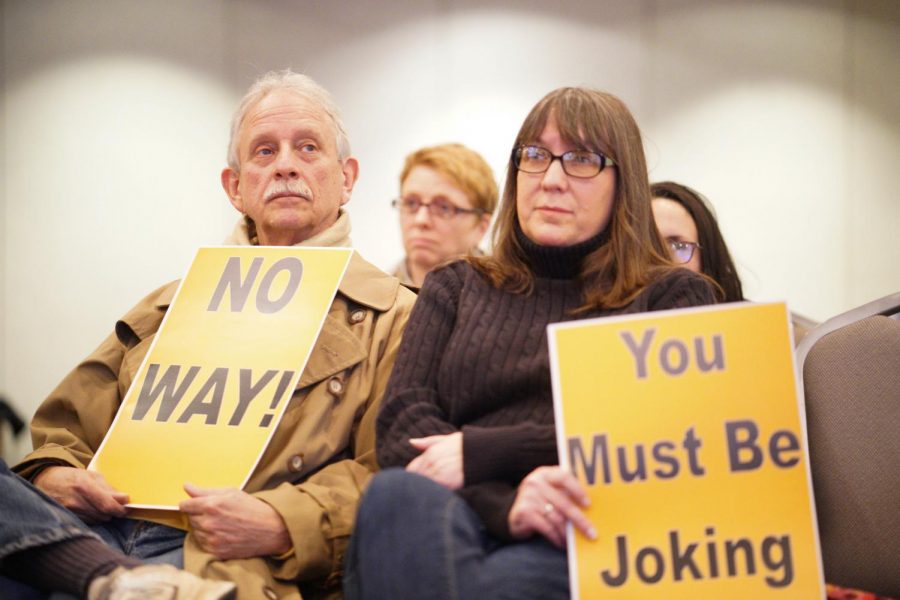 Protesters in the crowd during Blankenship's town hall meeting.

Blankenship previously served one-year in prison for conspiring to willfully violate mine safety standards during his time as CEO of Massey Energy, but said during the meeting that the accusations are false and the explosion at the Upper Big Branch mine, which killed 29 people, should be re-investigated.

Doug Smith, a retired federal mine inspector, said he inspected many Massey Energy coal mines and never saw a problem.

“I cannot recall ever writing a closure order at any of Massey’s mines,” Smith said. “There were very, very few citations.”

According to Blankenship, coal miner safety is very important.

Protestor Aaron Llewellyn, who is new to the Huntington area, said he is shocked that Blankenship made the decision to run for U.S. Senate.

“I was pretty astonished that someone with the record of Don Blankenship has the nerve to come and campaign here and actually solicit people for their support,” Llewellyn said. “I’m just here to witness it and confirm that it’s real.”

Llewellyn said he believes Blankenship’s campaign strategy of proving his innocence is a way to hide what really happened.

“If that’s your campaign lead, you obviously are covering up something,” Llewellyn said. “He’s definitely over-compensating for his innocence.”

Courtney Boyd said she attended the meeting to hear what Blankenship had to say so she could be prepared to stand up against it. Boyd said she hopes to share the information she gained from the speech with others.

“I came here to hear what he had to say in regards to why he thinks he’s qualified to run for candidacy based on his history and the things that he’s done that have affected people’s lives while he got rich off of it,” Boyd said. “I think he’s a horrible option for West Virginia.”

Other attendees were also skeptical of Blankenship’s past.

Fitzwater said some of Blankenship’s policies are similar to those he hears often but are never accomplished.

Leif Olson, who attended Blankenship’s previous town hall in Beckley, said he was surprised at the lack of supporters and that protestors with signs were in attendance.

“Huntington isn’t as connected to coal, but I expected more,” Olson said. “Beckley probably had twice this number.”

Olson said he also had some concerns about Blankenship’s ideas on immigration and the opioid epidemic that is sweeping the country, and more specifically, West Virginia.

Olson said most of the overdoses in the area today are caused by fentanyl, which he said can be synthesized in a lab and does not have to be smuggled across the border.

“When people have problems getting heroin, well, they’re going to look around for other stuff that looks like it and makes them feel the same,” Olson said. “People are probably making it (fentanyl) in their kitchen.”

Although some in attendance were unsure of the retired businessman’s agenda, others like Smith said they hope to see Blankenship win the election.

“I appreciate Don, and I’d like to see Don become the next U.S. Senator for the state of West Virginia,” Smith said.