Protesters from around the country march on the Greenbrier 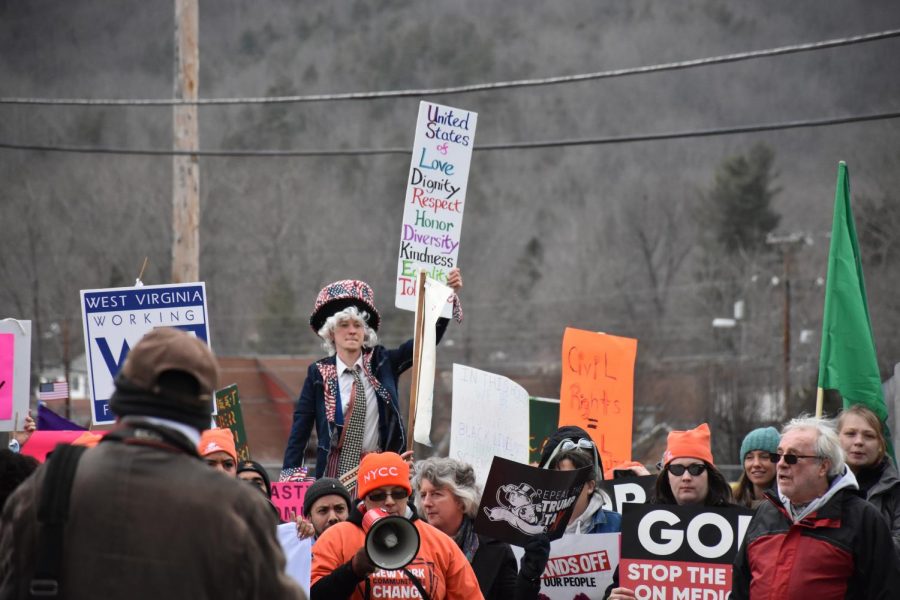 Protesters gather outside The Greenbrier during Trump-attended GOP retreat, February 1, 2018.

Protesters took to the streets of White Sulphur Springs, West Virginia yesterday to march on the Greenbrier Resort, where GOP congressional members and President Donald Trump met to discuss the coming year’s agenda.

“It’s not about a man, and it’s not about an administration,” Federal Campaigns Director for Our Children Our Future Sammi Brown said. “It’s about many, and it’s about the agenda that seems to be constantly affecting them. Here in the state of West Virginia, we have a majority of our population on Medicaid. The folks that are looking for opioid relief, and that are looking for rehabilitation, guess how they’re paying for that? Medicaid.”

The march brought in protesters from all around the country. Protesters from Pennsylvania, Vermont and New York City were in attendance. Different organizations traveled to the Greenbrier to convey their messages to the members of the GOP that were driving by as protesters sat outside the gates of the resort.

“I am trying to really represent the Dreamers… It’s important to have immigration being brought to the forefront,” protester Rainy Leonor said.

Leonor is a Dreamer herself, originally from the Dominican Republic and was at the rally that day to convey her message to Trump and the GOP leaders to protect the 1.8 million Dreamers across the country.

Democrats and Republicans have been seeking a compromise to the issue of immigration, while still protecting the undocumented children who were brought here when they were too young to make the decision themselves. Democrats have already said they will not fund another spending bill to keep the government open if Dreamers are not protected.

“I came down from Burlington, Vermont with a crew of about four other people,” Laura Mistretta, a volunteer for “Rights and Democracy for Vermont,” said. “I’m down here cause, I stay up to date on the news, and I feel really distressed by what is going on with the federal government and with the Trump agenda. I’m here today to speak up for the people who can’t be heard and the people who can’t be here today.”

Groups like Mistretta’s joined together to walk up the main street of White Sulphur Springs. Protesters were not allowed in past the gate of the Greenbrier, but were allowed to set up a rally out front of the gates. GOP Members did not come out yesterday to discuss issues with the protesters, but they did see the protesters as they took tours around the Greenbrier facility.

Different stories were heard throughout the rally, mainly surrounding the issues of immigration and health care. Many protesters spoke at the rally and told their stories including a former Desert Storm Army Veteran Tina Grey. Grey spoke about how she sees the fight for democracy now as just as important as it was when she fought for democracy during Desert Storm.

“I was proud to fight for my country,” Grey said. “At the age of 20, I wrote my own will because I was not sure I was coming home. You know what I realized that day? I was prepared to die for my country because democracy is that important, and it’s that important now.”