Justice addresses progress in State of the State 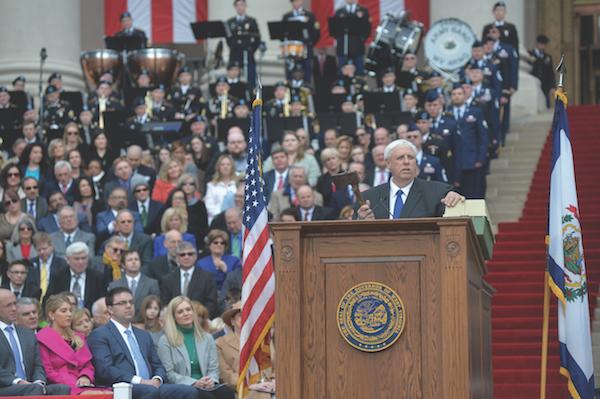 One year after West Virginia Governor Jim Justice took office, the axe and tackle box that he presented to the crowd on the steps of the Capital Building were once again on his podium for his State of the State address Wednesday night. The axe and tackle box were used at the Governor’s inauguration as a metaphor for what he hoped to change about the state’s economy.

Gov. Justice often uses visual representations and analogies to explain his ideas and plans, and Wednesday night’s State of the State Address had many. In the beginning of Justice’s speech, he compared the state to the monster from Frankenstein.

This was Justice’s way of saying that the state had begun to revitalize in his first year in office. Once again, touching on his campaign slogan, “Tired of being 50th?”

Justice hit on his administration’s successes throughout the speech, touching on topics such as the road bond that was approved last fall. Justice’s road bond is said to bring in over 500 new projects to the state, along with creating jobs.

Another campaign promise that Justice has continued to address throughout his first year in office is the opiate epidemic in the state. Justice said the state was in need of larger treatment facilities and more social workers for addicts, but he did not have a plan to fund those programs.

For Huntington, this could become a growing issue with only 750 treatment beds currently in the state of West Virginia. In Cabell County, the wait list for treatment beds and facilities can last up to a year.

Justice introduced a doctor from West Virginia University who had been working on a new treatment device. The device is supposed to “take away” the addiction from the addict. Justice did not say who that doctor was but did say he would put his full support behind their program.

An issue that was talked about leading up to the State of the State was the topic of education.

“At 5:15 p.m. today, Secretary of Education Betsy Devos called me to tell me that our plan, West Virginia’s plan for every student, it’s call WV’s Every Student Succeeds Plan, was passed today,” Justice said.

Every Student Succeeds Act is a plan to reduce the number of non-proficient students, overall in half, by 2030. The purpose of the plan is to grow the graduation rate in West Virginia by allowing students to find jobs or secondary education that fits the student best.

Justice then proposed his administration’s plan to eventually provide free community college and trade programs to in-state graduates. What was not mentioned was the funding for these scholarships. He did not mention further funding to other higher education throughout the state.

This will be an issue that may land on Justice’s desk if universities like Marshall and WVU begin to lose funding and scholarships as his administration begins to fund those community colleges and trade schools.

One achievement that Justice did tout throughout his speech was the 1 percent raise to all state government positions, including Marshall University staff members. How much this raise will affect staff income is circumstantial.

Justice finished his speech last night with another visual aid as he brought out his girls’ basketball team. He asked the audience and the state if they would let him be their coach.