Column: ‘Open-air’ preachers may be allowed, but are not welcome 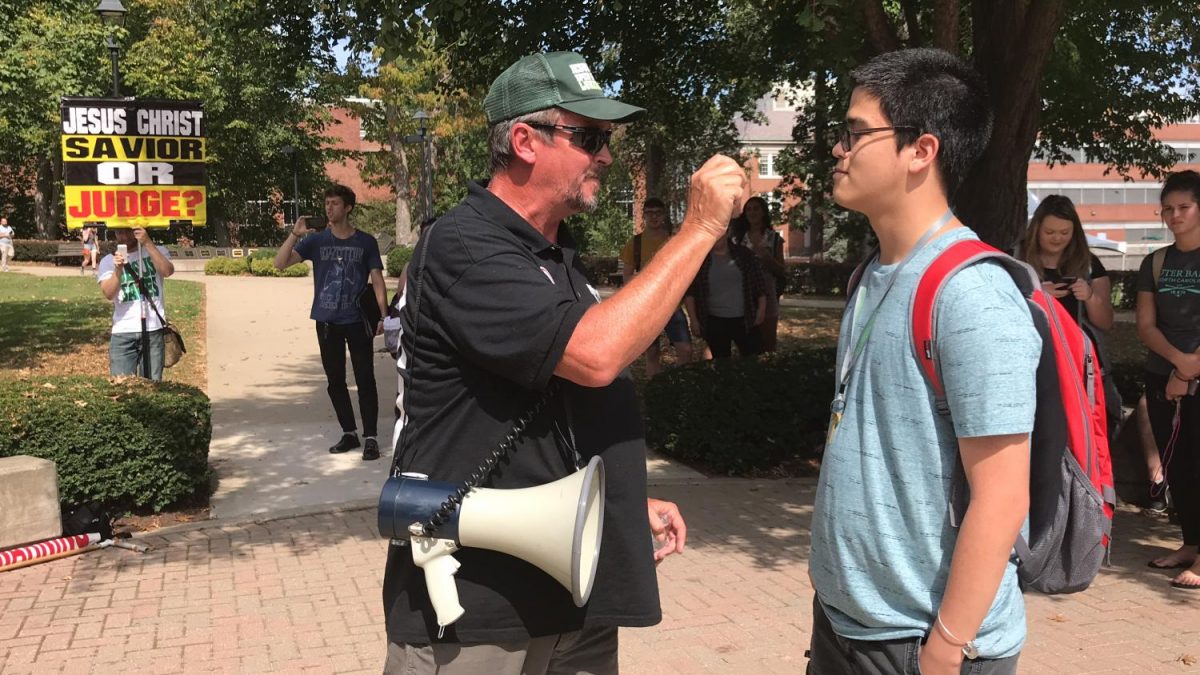 Freshman computer science major Lynne Thompson (right) confronts open-air preacher John McGlone over his method of envangelism Monday at the Memorial Student Center plaza. A Christian, Thompson disagreed with how McGlone was choosing to spread the teachings of the religion.

Drawing crowds in front of the Memorial Student Center throughout the afternoon, McGlone was tagging alongside evangelist mainstay Zachary Humphrey who told a reporter for The Parthenon in August he didn’t enjoy the chaos, but enjoyed the conversation open-air preaching spurred. But this claim is hard to believe as Monday’s display suggested Humphrey and his partner had little desire for conversation while fully embracing the chaos they were producing.

For several Mondays, the open-air preachers have taken root in the center of campus, drawing crowds and opposition with divisive diatribes centered on the immorality of college campuses. Throughout Monday’s “preachings,” McGlone and Humphrey were a source of blatant bigotry against members of the LGBTQ+ community, Muslims and women.

Freshman psychology major Olivia Strother said she asked Humphrey whether a woman should be held responsible for a sexual assault based on the outfit she was wearing when it happened. Strother said Humphrey told her there was no way a man could see her in the outfit she was wearing without feeling sexually attracted to her. Strother eventually asked what would happen if she was in a situation where a man made an unwanted sexual advance on her.

McGlone seemed particularly fixated on homosexual and transgender individuals throughout the afternoon.

Throughout their divisive tirades aimed at Marshall students, Christians who disagreed with Humphrey and McGlone confronted the open-air preachers, questioning whether or not the preachers’ approach conformed with the Christian faith.

Lynne Thompson, a freshman computer science major, said that he was a Christian but “nothing like that thing,” pointing to McGlone.

“It hurts to see people use the word of God like this,” Thompson said to a small group of fellow Christians at the scene.

Joshua Flynn, a sophomore psychology major and a musician who played alongside three others, said he’s a Christian who disagrees with the preachers’ attempts at evangelizing.

“This kind of approach is probably the worst way to get people to join the Christian faith because you’re instilling them with fear and disgust,” Flynn said. “When you tell someone that God doesn’t love them, then why in the world would they ever want to join a faith where their God hates them.”

Flynn said that playing instruments overtop the preachers isn’t an attempt to stifle free speech, but to show how “ludicrous” they sound.

With the men at such a central location on campus, students voiced frustration at the difficulty of avoiding or ignoring the men and their frequently insulting language. While Humphrey and McGlone certainly have a right to speak, it remains to be seen what impact their actions will have among the minority groups they targeted during their preaching.

McGlone is one of a rotating group of open-air preachers to visit Marshall, but the first to take as radical of an approach. It is unknown if McGlone will return.

As one of the musicians who requested to remain unnamed said while the preachers gathered their belongings, preparing to leave:

“You might be allowed back. But you aren’t welcome here.”