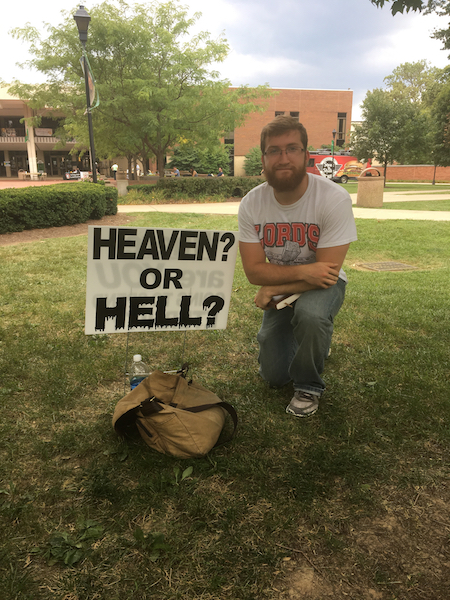 The College campuses have long valued soap-boxes and free speech zones.  So, it comes as no surprise that one especially passionate messenger has jumped at the chance
at Marshall University.

Zachary Humphrey, an Evangelist and former preacher, began “open-air” preaching two years ago, and said he felt led to go outside of the four walls to talk about Jesus.

Campuses like Marshall have been a specific target for Humphrey because of the consistent number of people present. Humphrey has visited other colleges like Morehead State and the University of Kentucky, but he said Marshall has become a go-to spot for him because it is only 20 minutes from where he lives.

What may be surprising to some who have seen Humphrey, or have even viewed his preaching as unusual, is that he is a full-time nurse.

“I work a full-time job. I have a professional degree. I’ve graduated from a university,” Humphrey said. “I’m not a crazy person, but I’m just someone who’s following what I consider as the ‘Great Commission,’ and that’s to share the gospel with everyone I can, even in the open air.”

Some students said they find the preaching disruptive or even offensive. Chelsey Hunt, a senior marketing major at Marshall, said she feels like open-air preaching is pushing religion on others.

“It may be awkward for people that are not of the same religion or a that have a different perspective,” Hunt said. “His preaching should be allowed because of freedom of speech but there should be a limit of what he can say or push unto others if they do
not agree.”

With heated debates occurring between opposing views on campus, Hunt said she believes such preaching can start protests and confrontation.

“It’s odd to do this on a campus where different cultures and religions come together,” Hunt said. “I feel like this could separate rather than
bring together.”

Humphrey said he prefers debate and disagreement because it opens conversation.

“My primary goal is to get discussion going,” Humphrey said. “I value those who disagree with me. I don’t enjoy the chaos, but I enjoy conversation.”