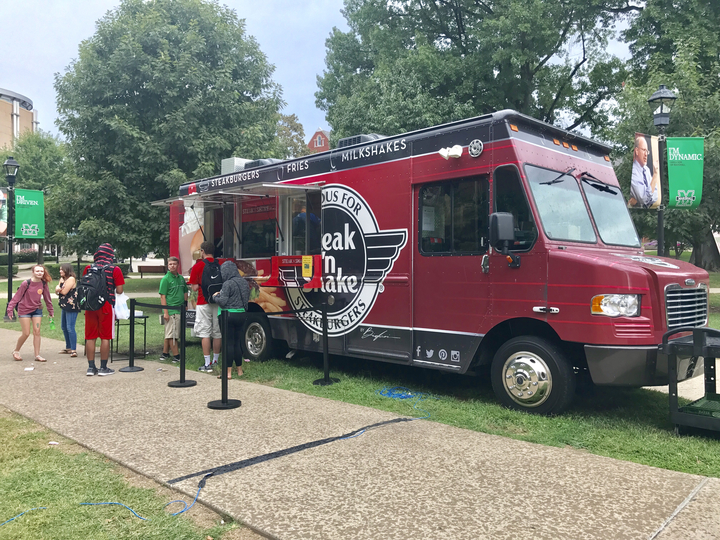 Students lining up to Steak and Shake’s food truck window to order a quick lunch in between classes.

Tuesday marked the grand opening of the Steak and Shake food truck on Marshall’s campus. Students flocked to the truck as it opened for lunch.

As part of the kick-off, Marshall University President Jerome Gilbert bought milkshakes for the first 25 students in line. Gilbert said he believed it would be a nice way to start it out.

Many students said they enjoyed the opening of the Steak and Shake truck. Freshman student Benjamin Day said the truck provides an alternative option for students who live on campus when they need a break from the dining hall.

“This is a nice alternative occasionally, but I don’t think you should replace the dining hall altogether with this,” Day said.

One of the many complaints amongst students is the lack of dining options on campus. Gilbert said he thinks students will like the new truck.

“I think it’s great to have another option for food on campus; the more diversification we can get on campus the better,” Gilbert said.

“I think in a year or so we’re going to have a call for proposals and I’m hoping it will stimulate a lot of diversification of food, even if we were to stick with Sodexo,” Gilbert said. “I think there will be more options available for students, so I’m excited about that.”

The Steak and Shake truck is currently parked by the Memorial Student Center.