Column: My time with President Kopp

"I’m also sad to say he won’t hand me a diploma in May, and I know I’m not alone in that thought. I was looking forward to shaking his hand and telling him 'thank you' for all the help he was to me. I’m heartbroken. Who will stand up for us now?" 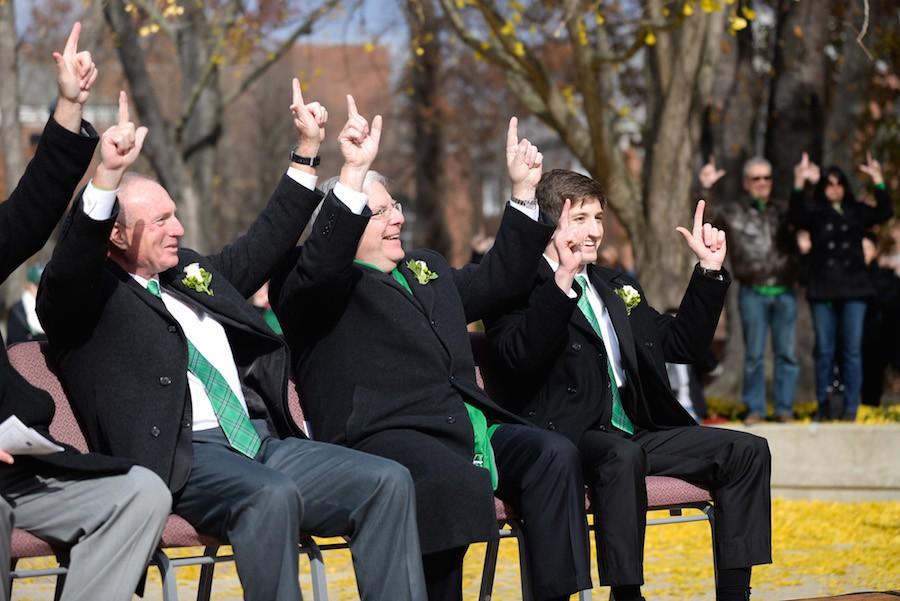 It was always a question at the paper: Do we call him Stephen Kopp or Stephen J. Kopp?

Personally, I preferred Stephen J. Kopp. I just like the sound of it more. It sounds like him.

I met President Kopp when I was a sophomore. It was spring 2013 semester and I was a reporter for The Parthenon. I was given the President’s Office beat, and I was terrified. It was a huge responsibility. I had to cover Faculty Senate, Board of Governors meetings and meet with the president weekly.

I met Matt Turner, then chief of staff and who also ended up having a great impact on me, and the two wonderful women who worked in the president’s office, Cora Massey and Renee Denney. Matt had me meet President Kopp immediately, and he was very welcoming. The whole office put my mind at ease. The president was not some stern, intimidating man like I thought he would be. In fact, I looked forward to coming back to the office.

That was a tough semester for President Kopp. Funding was going to be cut by the state. President Kopp did everything he could to fight the nearly nine percent budget cut. He spoke to legislators and was often in Charleston, fighting for the students of Marshall University. He did not want to raise tuition. He said it often; it was his main concern. He wanted to make sure everyone had the opportunity for a better education, but he also saw where the legislation was heading.

With the budget cut looming ever closer, President Kopp made a decision. That decision is a dark mark on his career at Marshall. A budget sweep and hiring freeze sent the university into a frenzy, and for the first time, the faculty passed a vote of no confidence against him.

During that time, President Kopp made himself available to me. I was tasked with covering the events, which, I’ll admit, was a great opportunity for me. He never talked down to me, and he never tried to avoid me. I was nervous, but he never made me feel uncomfortable or afraid to ask him about the situation. Where he could have avoided me, he set up an interview. He welcomed my questions. He never once tried to stop me from publishing something, and I never felt he was hiding something from me.

The day of the emergency general faculty meeting, student protestors stood outside with signs saying “Kopp Out” and “Resign.” He could have entered the Newman Center through the back. Instead, he walked through the crowd, looked them in the eyes and said hello. After answering questions from a room full of angry professors, President Kopp could have left through the back again. Others did. Instead, he went through the front, addressing students with his head high.

Regardless of whether his actions were right or not, President Kopp did what he thought was best for the university. He apologized, and I believed it to be sincere. He didn’t pass the buck. He took the responsibility for his actions, and continued on to fight budget cuts from the state and make the university stronger.

Because of Kopp, we have a Rec Center, where my best friend works. The freshman dorms, where I met life-long friends and made wonderful memories. A beautiful Visual Arts Center, which will attract new students and connects our campus to downtown Huntington. Soon we will have a brand-new engineering complex, which will continue to advance Marshall. The man had a vision, and he got it done.

I have fond memories of my time with President Kopp. He invited me to a luncheon where he received an award. Since I was covering it for the paper, I thought I would be in the back, not get to eat and stand the whole time. On the contrary, I met his kind wife, ate with some of the most important people at Marshall and got good photos because I sat in the front.

This summer, during my internship with The Herald-Dispatch, I covered the faculty awards luncheon. President Kopp was the first person I saw. He was standing in line for food. He knew I was there for some journalistic reason, and I told him about my internship. He was happy for me and talked to me about how school was going and my plans for the future. He always stressed studying abroad. He told me college was prime time to see the world. I’m sad to say I never got the chance to take that advice.

I’m also sad to say he won’t hand me a diploma in May, and I know I’m not alone in that thought. I was looking forward to shaking his hand and telling him “thank you” for all the help he was to me.

I’m heartbroken. Who will stand up for us now?

My thoughts and prayers go out to his family, friends, all those who worked closely with him and Marshall University. We miss you already, President Kopp.

Taylor Stuck can be contacted at [email protected]