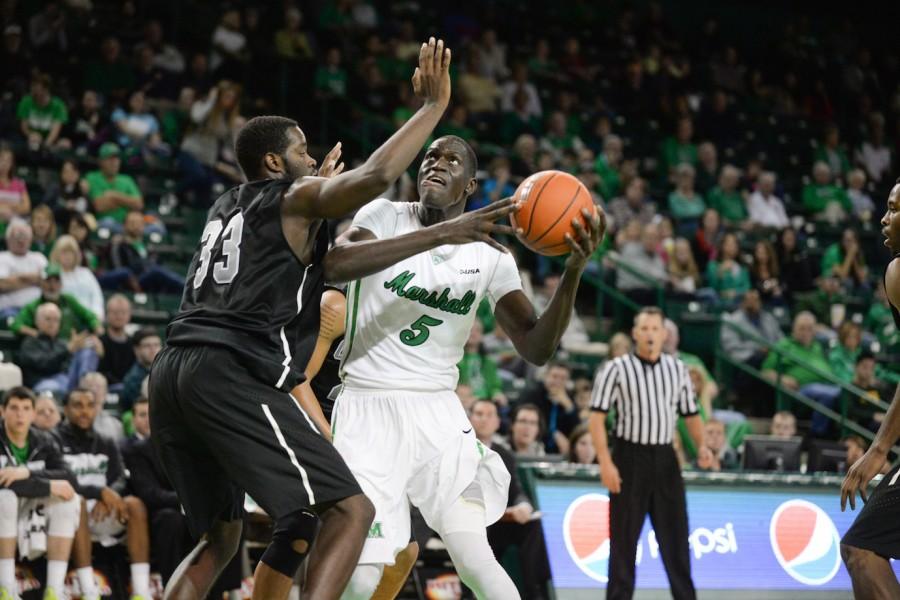 If there is one thing history tells sports fans in the Mountain State it’s that you can throw out the records and stats when it comes to the Capital Classic. The annual matchup at the Charleston Civic Center between Marshall University and West Virginia University’s men’s basketball teams Sunday was no different.

Despite the Thundering Herd coming into the game having lost five straight, it went into the locker room at halftime tied at 27 with the No. 22 Mountaineers before falling to its in-state rival 69-66.

The Herd rode the hot hand of Justin Edmonds, who shot 3-4 from three, and its perimeter defense, WVU shot 0-7 from three, to take a brief lead late in the first half.

Marshall was able to break the full court press of WVU to get easy points at times, but the Herd still finished with 24 turnovers.

After the game, Herd head coach Dan D’Antoni said Marshall needs to improve with the ball in its hands, which takes time.

“We’ve got to get better with the ball,” D’Antoni said. “We’re not strong and our players hesitate a little bit. It’s been a problem we’ve had all year, and of course, when you get in tough situations you sometimes revert back to the way you were. And that’s why it’s a growing process with this team.”

Trailing 24-18, Marshall would go on a 9-0 run powered by five free throws to take a thre- point lead late in the half. A jumper at the buzzer by WVU guard Jevon Carter knotted the score at 27 heading into halftime.

In the second half, the Herd came out with the momentum it had built right before the break, making its first eight shots and jumping out to 49-41 lead nearly halfway through the second half.

Over the final 11 minutes, though, the Herd would struggle to make shots and watch as its lead slipped away, going more than eight minutes without basket before Tamron Manning got a layup to draw the Herd within one at 60-59.

That layup and a three by Edmonds were the only made field goals in the final 11:27 of play. During that span, the Herd hit 12 free throws, but when it needed a three the most, the shot would not fall.

After Edmonds’ three brought the score to 67-66 in favor of WVU, the Mountaineers’ Juwan Staten was fouled and sent to the line for two free throws, which he made.

With seven seconds left, the Herd had a shot to tie the game, but J.P. Kambola’s three pointer was no good.

D’Antoni said he was proud of how the team played, but acknowledged that there’s still progress to be made.

“For these kids to pick their bootstraps up a little bit, get in there and have a chance to win, that I’m happy for,” D’Antoni said. “The thing is, though, we’ve got to be better than that. I told them, we start tomorrow, we go to practice and we move forward.”

Following the team’s sixth straight loss, Edmonds, who finished with a team-high 18 points and six assists, said the tough losses are bringing the team together and it should be able get back to winning soon.

“Each game, we’re growing together as a team, on and off the court and in the locker room we’re coming together more,” Edmonds said. “We’re starting to do more with each and other instead of everybody by themselves so with the atmosphere and the tough losses we’ve had, I think it’s just bringing us closer and I think we can turn things around.”

In addition to being the team’s leading scorer, Edmonds also won the team’s most valuable player for his effort in the Capital Classic.

The Herd will look to right the ship Tuesday at home against King College. Tipoff is at 7 p.m.

Shannon Stowers can be contacted at [email protected]