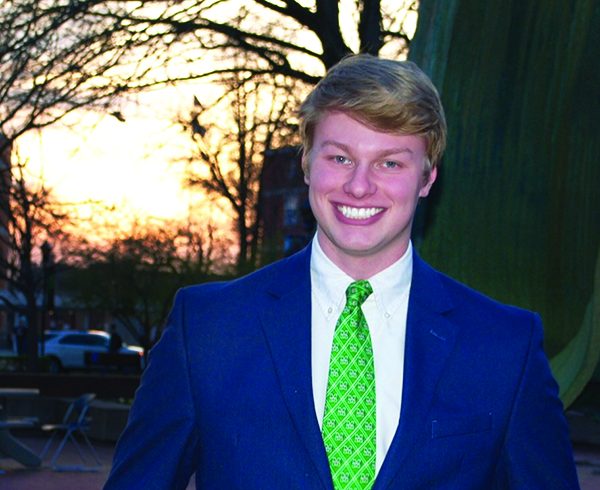 Marshall University's Student Body President, Matt Jarvis, poses for a photo outside at the Memorial Student Center Fountain. Jarvis is set to give a presentation at Huntington City Hall on Monday at 7 p.m.

Marshall Student Body President Matt Jarvis will take the stage at city hall on Monday to give a talk that hits close to home for him. “Mountainqueer: Identifying as LGBTQ+ in Appalachia”, set to begin at 7 p.m., will address the experience of LGBTQ+ people in Appalachia, specifically in the West Virginia, with the focus on the growth of LGBTQ+ population in the state.

“West Virginia does have a declining population,” Jarvis said. “But with that the LGBTQ+ population has been growing. In 2017 alone it’s estimated that LGBTQ+ marriages are going to revenue about 9 million dollars”

In fact, the University of California’s Williams Institute estimates that there will be 1,400 West Virginia same-sex marriages in 2017 alone.

While Jarvis agrees that the state has a long way to go, he still believes the community structure of West Virginia facilitates acceptance of individuals.

“They’ll still treat you with love and kindness and respect,” Jarvis said, “and they’ll still help you out. If you need a cup of sugar in your neighborhood, they’re still going to do it. Little things like that that we can attribute to our close-knit neighborhoods, to the way our communities are structured, the way our families are here—very tight knit.”

For Jarvis, even though the state is not as progressive as he would like it to be, he expressed that for the most part, as an individual, he is accepted in his community. However, certain policy decisions cannot go unnoticed, like the recent decision of the West Virginia Supreme Court that anti-gay assaults are not covered under hate crime laws.

When Jarvis was asked to give the talk at city hall, he didn’t said he didn’t feel qualified to speak on such a platform, but he has found that as the first openly gay student body president at Marshall, this platform has become his responsibility.

As the student body president, Jarvis stressed the importance of being there for LGBT students, referring to a story recently published in the New York Times.

‘My Family Didn’t Accept Me. Ole Miss Did,’ written by Dylan Lewis, addresses the author’s own experience of being kicked out of home. He then found home at the University of Mississippi.

“For the first time ever, I found friends who loved me for who I am,” Lewis wrote. “I gained confidence and took on leadership roles. I joined the student government. I gave campus tours as an Ole Miss ambassador and welcomed new students as an Ole Miss orientation leader. I was never made to feel I didn’t belong.”

Jarvis pulled from the article that without family support, the college process can be burdensome for LGBT students, referencing the Point Foundation study that one-third of LGBT students delay attending a four-year college for reasons of affordability or debt. Jarvis hopes that Marshall can be what Ole Miss was to Dylan Lewis.

When Monday comes around, Jarvis has prepared all his facts and statistics, but realizes the importance of his own experience.