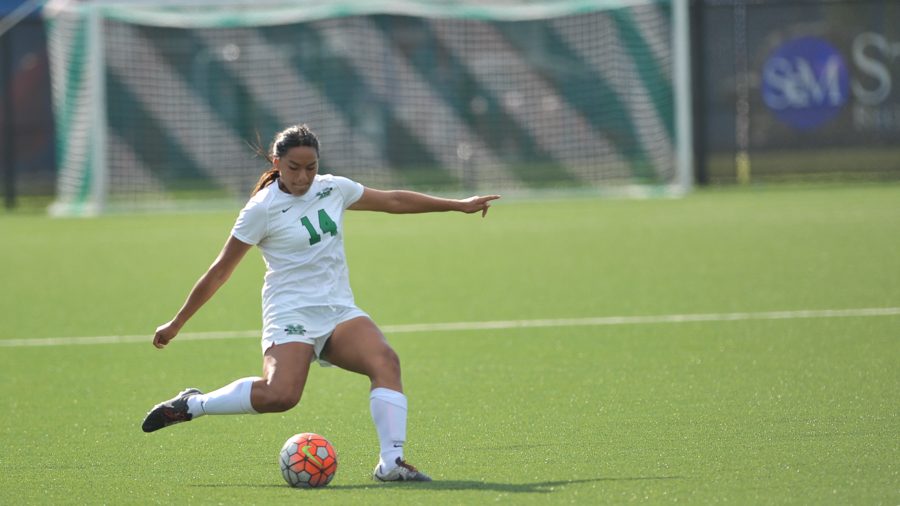 Freshman defender Metz Gonzalez passes the ball during the match versus East Tennessee State at the Hoops Family Field, September 4, 2016.

“I am blown away and proud of the success our student-athletes in the classroom,” Marshall athletic director Mike Hamrick told Herdzone.com. “These results confirm that our student-athletes are benefiting from the addition of the state-of-the-art Buck Harless Student-Athlete Academic Center. Their performance, academically, is unprecedented since the inception of APR.”

The academic progress rate officially became a metric of Division I academic performance in 2003. According to the NCAA’s website, APR is meant to hold schools accountable for the academic progress of their student athletes. The team-based metric takes into account athlete eligibility and retention for each term.

As it stands currently, programs must earn a 930 four-year APR average or a 940 average over the most recent two years to be eligible to compete in NCAA Championships.

According to the scores, the Thundering Herd had four athletic programs – football, women’s basketball, women’s cross country and women’s soccer – finish in the top five within their respective sport in Conference USA.

“The credit goes to the student-athletes who are putting in the work, the coaches and assistants who underscore the importance of academics here, and the staff at ‘The Buck’ who go to great lengths to make certain our student-athletes excel,” Hamrick told Herdzone.com. “This is what we envisioned when we built the Chris Cline Indoor Complex and the attached academic center. We made it loud and clear we wanted to emphasize academics here, and our student-athletes have listened and elevated their performance accordingly.”

Earlier this year, the Herd set a new school record for student-athletes named to the C-USA Honor Roll with 211. C-USA also announced last month that 64 Thundering Herd had earned academic medals, the second most in conference this year.