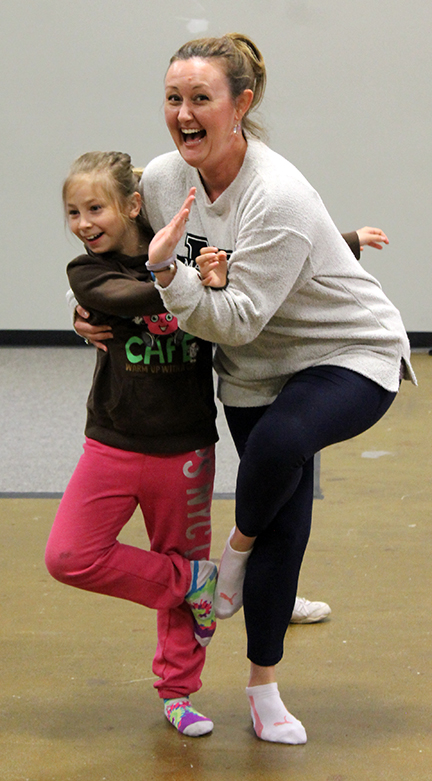 Terri Olson was unsure what the next step in her life would be. Adoption had run through her mind but she was unsure if she was ready for that commitment. So she chose the next best thing: becoming a big sister.

Julee Bartram was raised by a single parent. Leah Prichard was young when she had Julee, and Julee’s father was rarely in the picture.

Terri, Leah and Julee all knew they had something missing in their lives.

Over six years ago, Julee was matched with her big Terri and now the two continue to grow their relationship and have become more like family.

“I thought about adopting and I wasn’t quite ready to do that, so I decide

d I really wanted to pour into a child and mentor them and it’s honestly been the biggest blessing of my life,” Terri said.

Julee was 6 years old the first time the two met living in a single-parent home. She said when she first met Terri, she lacked confidence but having Terri mentor her has helped her express herself more and taught her what a good relationship entails.

“Seeing her and her relationship with her husband is very enlightening because I have never been put around that,” Julee said. “Seeing them be close and being able to talk to each other and being in a healthier relationship is nice. When I grow up I want to be able to live that kind of life.”

Julee’s mom, Leah, signed Julee up for Big Brothers Big Sisters to give her a mentor and friend to do activities with on a regular basis, but not only has Prichard seen an impact in her daughter’s life, but she’s seen one in her own.

“At the time that I got Terri involved, I was a drug addict, a legal drug addict,” Prichard said. “I wasn’t the best influence at the time, so (Terri) helped to show her and also me that I didn’t want to be that kind of person. I wanted to be good for Julee so that helped me get clean. I’ve been clean for seven years now but Terri did play an influence in that.”

Stories like Terri’s and Julee’s are common among other matches through Big Brothers Big Sisters who said their lives have been significantly changed.

“I was recently talking to a parent of a boy who has had some trouble in his past and had a lot of family issues and moving around a lot,” said Amy Brewer, enrollment and match support specialist for Big Brothers Big Sisters of the Tri-State. “Just recently his mom came back into his life and they seem more stable and he’s doing so great. His mom had so many great things to tell me about how much they love his big brother and how he’s so important to her son.”

Big Brothers Big Sisters of the Tristate provides one-on-one matches to kids ages 6-14 who may not have adults in their lives that are consistent or who just need an extra role model to hang out with them or help them with homework. Director of Big Brothers Big Sisters of the Tristate Patti Price said the most important thing they do is “matching a child to a volunteer.”

“We provide mentoring services to children who are facing adversity and because of that we are hoping to reach children who perhaps really need a stable friend and someone to provide guidance and friendship in their lives,” Price said. “We feel that by providing that person in a child’s life, that will help strengthen that child and empower them and encourage them so that when they’re older, they’ll make the right decisions and be able to be a good member of society.”

To become a big brother or sister, a person must be 18 years or older and go through an interview, reference checks, a background check and training. Ginny Blake, who is the on-campus representative at Marshall for Big Brothers Big Sisters of the Tristate, is in the process of becoming a big sister, but said working for the organization has already impacted her life.

“I’ve seen the impact that it’s had on the little kids,” Blake said. “Where they were headed beforehand is drastically different from where they end up. I’m not a big sister yet, but any way that I can help a little girl or little boy find their big, still makes me feel like I’m making an impact in the best way that I can.”

Both Brewer and Community Based Enrollment and Match Support Specialist Sarah Brewster said that one aspect of their job that is difficult is volunteers not following through on their commitments and not staying for the full year requirement.

“A lot of the children that we serve, the adults in their lives sometimes aren’t the most trustworthy and they don’t always follow through on commitment,” Brewster said. “Sometimes it’s heart-breaking when the big doesn’t put in all the effort that they can into the relationship. So I want our volunteers to follow through on their commitment they make to them and really try to be a significant part in their lives as often as they can.”

The waiting list for kids wanting big brothers and sisters continues to grow, with 45 boys and 18 girls wanting a match. Without volunteers joining, some kids will give up waiting to be matched or may eventually grow out of the age range.

“There’s not enough guys,” Terri said. “(Julee’s) brother waited for three and a half years and gave up. There’s a lot of boys out there, it’s tough. Women can’t pass on masculinity, only men can.”

Big Brothers Big Sisters of the Tristate runs on grants from United Way and other outlets, but this money is not enough, so the organization hosts various fundraisers throughout the year. These include events such as a bowl-a-thon, a silent auction and a Christmas tree sale.

Anyone interested in volunteering or who wants to become a big brother or sister can call 304-522-2191.