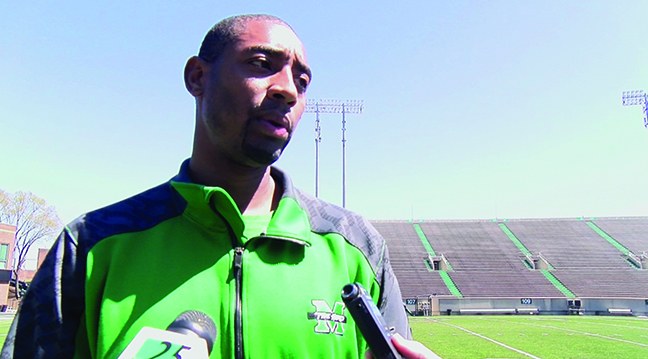 New wide receivers Coach Dallas Baker speaks to members of the local media after spring practice April 8. Baker played under Marshall Head Coach Doc Holliday during his time at Florida from 2005 to 2007. Baker won a National Championship in 2006 And a Super Bowl With the Pittsburgh Steelers in 2009.

Newly hired Marshall wide receivers coach, Dallas Baker, has been around football nearly his entire life. After winning a National Championship with the University of Florida in 2007 and a Super Bowl two years later with the Pittsburgh Steelers, Baker has finally fulfilled his lifelong dream of becoming a Football Bowl Subdivision receivers coach. That dream had everything to do with family.

“My uncle is Wes Chandler, a legend at Florida, so I grew up around football. I remember when he worked at UCF (and) being on the sidelines,” Baker said. “Also growing up a Gator fan. My cousin was a part of the first national championship team as a walk-on. I was always around it and always saw how the coaches were about it, so that was my goal.”

He brings a ton of experience to the program and specifically to a depleted receiving group after seniors Josh Knight and Justin Hunt graduated and juniors Michael Clark and Deon-Tay McManus were declared for the upcoming 2017 National Football League Draft.

Baker said that even in the early stages, he is emphasizing the concept of turning struggle into success.

“My first few years at Florida we struggled,” Baker said. “We had talent, it wasn’t the coaches, it was more of us. We had too many egos. We were living off what the past Gators (had) done but we hadn’t done anything, but we had egos as if we had done something. We didn’t really hang together.”

Family has always been a huge part of Baker’s life, even outside football, and he said he wants to incorporate that atmosphere inside the locker room. One of the first things he did as a coach was not zero in on the X’s and O’s, but was try to unite the position group.

“Family is a big deal in our room and that’s what we constantly talk about,” Baker said. “Once you care about the guy next to you, it’s hard to beat you.”

With just two weeks of spring football practice in the books, there is still plenty of work to be done, but Dallas Baker is ready for the challenge of leading the Thundering Herd wide receivers.

Luke Creasy can be contacted at [email protected]