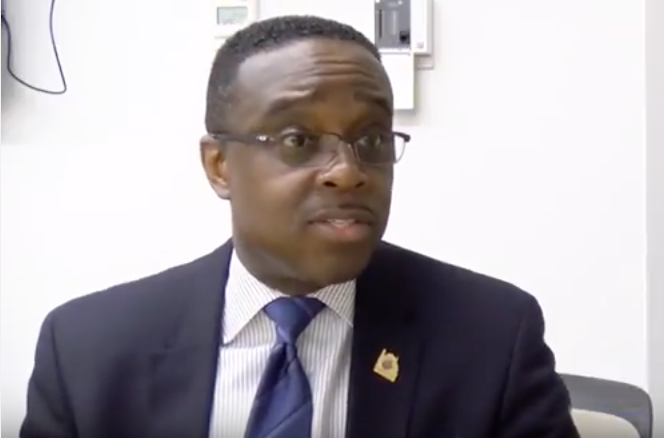 Karl Colder, special agent in charge of the Washington, D.C. field office, which covers Virginia, Maryland, the District of Columbia and West Virginia.

Representatives from the Drug Enforcement Administration are partnering with local organizations and providing training to deal with the heroin and opioid addiction problem using the DEA 360 Strategy.

According to the Centers for Disease Control and Prevention, West Virginia was the state with the highest rate of drug overdoses in 2015. Prescription and illicit opioids were the main driver of these deaths and were involved in 33,091 drug-related deaths in 2015.

Karl Colder, special agent in charge of the Washington, D.C. field office, which covers Virginia, Maryland, the District of Columbia and West Virginia, said the program is currently in the pilot stages and is for diversion control, community outreach and law enforcement, focusing on a “three-prong approach” to battling the problem.

Colder said the problem has become much more prominent and widespread than ever before.

“You now see this epidemic in rural areas where we didn’t see that before,” Colder said. “That’s why this is a major issue, because it’s filtering into the mainstream of society.”

Both Huntington Mayor Steve Williams and Marshall University President Jerry Gilbert have been vocal about addressing the drug epidemic and its effects on the city and Marshall’s campus.

“Law enforcement realizes they can’t arrest themselves out of this problem,” Gilbert said. “This is an opportunity for Marshall University and our schools of pharmacy and medicine. Substance abuse is a community problem and we are part of this community. We are committed to being part of the solution.”

Colder said community support is one of the best ways to ensure the effectiveness of the program.

“That’s the good thing about this pilot in Charleston and Huntington,” Colder said. “The network, the stakeholders are all on board, something that was established prior to even establishing this 360 concept. So you have a huge community participation in this whole initiative.”

Huntington and West Virginia as a whole have been continually dealing with the drug epidemic. Huntington saw 26 overdoses in just a few hours last summer. Multiple lawsuits against drug companies have been filed throughout the state for filtering in massive amounts of opioids and pain killers.

The West Virginia House passed a bill this session to increase penalties for trafficking fentanyl. Fentanyl is one of the leading causes of drug overdoses in the Mountain State. HB 2329 sets a minimum two-year sentence for those convicted of making or transporting five grams or less of fentanyl. Penalties increase based on the amount of

the dangerous drug that’s manufactured or distributed, with the maximum jail sentence being 45 years.

Colder said this legislation comes from agencies working together to decide what’s best for helping citizens of the state. He said it sends a message to drug dealers who are coming from other parts of the country.

“When those individuals we find, the root of the problem, are prosecuted in this state and they live in Detroit or Chicago and are coming here to (deal drugs), they might want to think again about distribution in West Virginia,” Colder said. “We have to send that message, and that’s the message we want the drug traffickers and dealers in other states to get.”

David Gourley, assistant DEA special agent in charge in West Virginia, said while society cannot arrest its way out of the problems brought by addiction, legal actions need to be taken to protect victims.

“You can arrest people all day long, but there’s a backflow that just comes right back in behind them,” Gourley said. “We have to educate people. They need to know about treatment and they need to know about prevention. This gives the community a mechanism to be able to teach or talk to people about that. I’ve been in law enforcement for 25 years and, before this program started, it was all about arresting people, putting cases together and working your way up the food chain. I think that this is a different animal, a different beast, where we have to figure out some different ways to do things.”

Law enforcement training has already begun locally, with 40 officers attending a recent session. Four training sessions will take place in May for members of the community to learn more about the initiative and the role they can play in combatting the problem.

Huntington and Charleston both joined the list of pilot cities this year, along with Manchester, New Hampshire and Dayton, Ohio. The program first enlisted Louisville, Kentucky; Milwaukee, Wisconsin; St. Louis, Missouri and Pittsburgh, Pennsylvania in 2016.