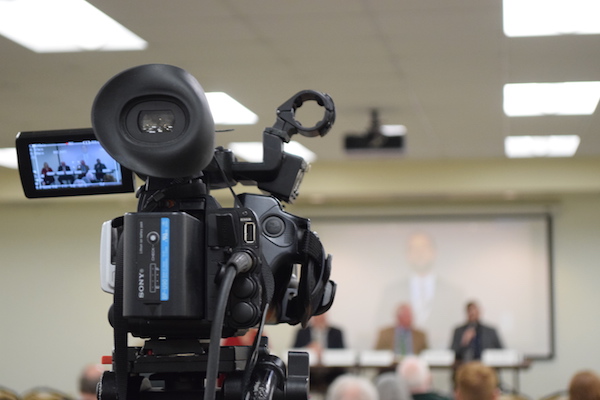 Media covering the “Symposium Examining Fake News,” in the basement of the Marshall University Student Center.

“‘Extraordinary claims require extraordinary evidence.’ In other words, if a headline goes out of its way to reel you in, you should always be skeptical,” said Kevin Goldberg, an attorney from Washington, D.C., as he began his keynote speech during the Symposium Examining Fake News Thursday, referencing the astrologist Carl Sagan.

In the past year, fake news has run rampant, and with the election of President Donald Trump, alternative left and right news sites have taken to social media to spread their agenda and messages.

The former CBS correspondent went on to say the media and especially network news are not the same anymore, referencing the days of Walter Cronkite being that of the days of facts and not opinion.

“Technology has empowered those who spew fake news,” Rebel said. “They have an instant access to the internet; they have instant immediacy in terms of the words they say and how they’re going to say it. That wasn’t true in 1966.”

One of the main points the panel agreed upon was the idea of checking what these news sources cite. Do they reference anyone throughout their story? Each of them shared their experiences when falling for the “click-bait” of fake news.

Each of their stories referenced a headline from an article that had hidden “trigger-words,” such as “you won’t believe,” “and you can’t believe why” or “here’s the secret they don’t want you to know.”

The panel told the room that each of these articles try and reel the readers in, and once they have read the article, the author’s message or agenda has been spread in some way. One of the ways each of them said they can pick out if articles are supported by facts is by looking for the articles to quote someone.

Each time they read these articles, none of them contained sources.

For now, students will have to use these tips to sift through this new world of fake news.