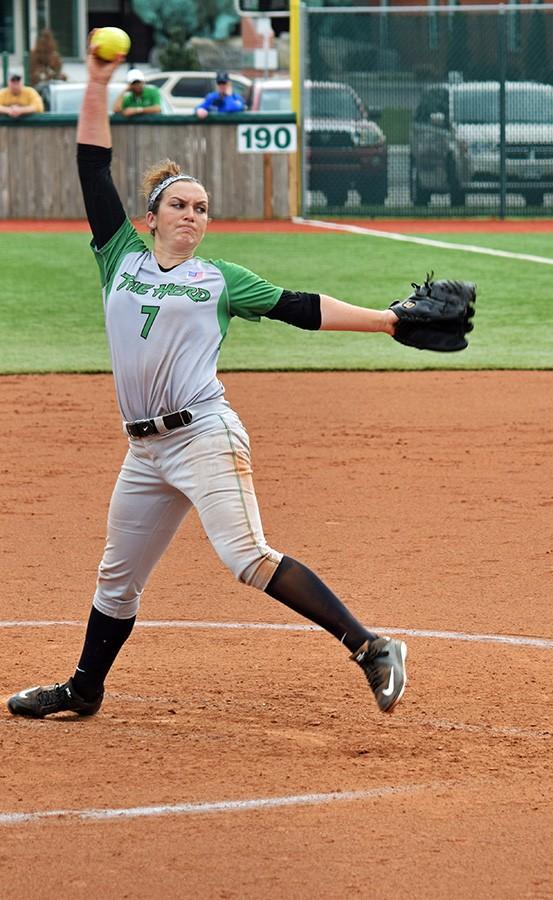 Herd sophomore Ali Burdette throws a pitch in a game during the 2016 season.

After four straight weekends on the road to begin the season, the Marshall University softball team plays at home this weekend at the Dot Hicks Softball Field. The team begins Conference USA play against the University of Texas at San Antonio for the team’s home opener.

The team has started the season as road warriors. Beginning with four tournaments, two in Florida, one in North Carolina and one in Georgia, the team is 14-4 after 18 games.

Last weekend at the Georgia Southern Eagle Classic, the team went 5-0 with wins over five different programs. As the preseason tournament section of the season is over, Conference USA play now begins.

Last season, Marshall made the Conference USA softball tournament as the fifth seed in the eight-team tournament. The team won one game before falling to fourth seeded Louisiana Tech. The team Marshall eliminated, UTSA, the program Marshall opens up with this weekend.

“Conference USA is a very sound conference,” head coach Shonda Stanton said. “We open up with UTSA at home, which is also our home opener. It’ll be a good matchup.”

The softball team plays nearly every weekend from now until the end of the season in Conference USA action. The team plays eight conference series, with four being home and four on the road.

Aside from playing a Conference USA series about every weekend, the team also will often play weekday games and occasional weekend series when the team is off from Conference USA play. For example, next Wednesday the team travels to Athens, Ohio for a matchup with Ohio University.

The team will also travel to Virginia Tech for a weekend series April 21 and 22.

“Every weekend is going to be a battle in this conference,” Stanton said. “The thing is, ‘are you strong enough for the journey?’ You make it up somewhere if you have an off weekend. You go out and you make it up the following weekend.”

The team is scheduled to face off against the Roadrunners beginning with a doubleheader at 1 p.m. Saturday. Sunday, the teams are scheduled to play one game beginning at noon.

Patrick O’Leary can be contacted at [email protected] marshall.edu.