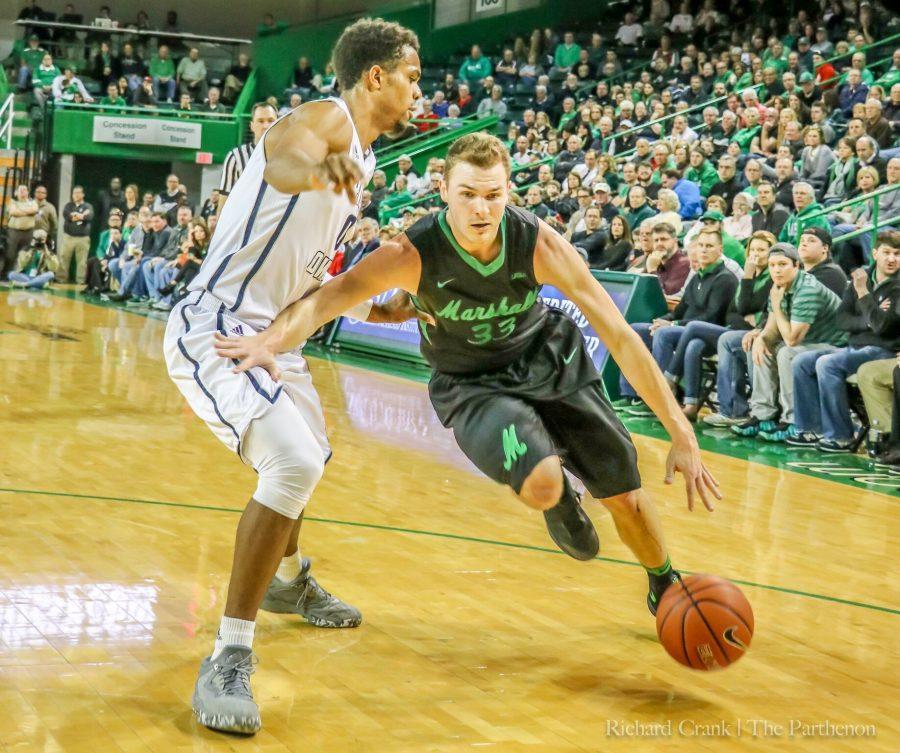 BIRMINGHAM, AL – To paraphrase the old saying, those who do not learn history end up repeating it.

On Wednesday night, that saying proved to be true for the Florida Atlantic Owls, as the Marshall Thundering Herd men’s basketball team ran roughshod over them, again, ultimately picking up the win 89-74.

FAU opened the contest as the aggressor, winning the opening tip and taking the ball into the teeth of the Marshall defense, attempting to expose the sometimes weaker interior defense of the Herd. But, the defense stood its ground and allowed few opportunities for the Owls to capitalize in the first half, only conceding a 37 percent shooting percentage in the half.

On the opposite end, FAU, having not learned from their last meeting with Marshall, did little defensively to stop the weapons of Marshall, allowing senior guard Stevie Browning to catch fire early on, ultimately setting the tempo for the rest of the team offensively.

After Ryan Taylor opened the scoring for Marshall with a long, straight-away three, Browning went to work, carving through the Owls’ defense and creating just enough space to get his shot off. The Logan County native gave the Herd their first lead of the game at the 17:54 mark of the first half, off a stop-and-pop on a drive to the hoop. Marshall took the lead 5-3 on that basket and, other than a 9-9 tie at the 16:00 mark, the Herd never looked back from there.

The senior scored 18 of his 22 points in the Herd’s opening half at Legacy Arena. With the FAU defense keying on him, the offense opened up for other plays, like sophomore CJ Burks, who scored 7 of his 14 in the first half on an efficient 3 of 4 shooting from the field. With the offense clicking on all cylinders, the firepower was too much for the Owls to handle, and Marshall took a 52-29 lead into the break.

Despite having momentum on its side, the Herd came out somewhat flatter in the second half, allowing the Owls to inch back into the game thanks to a 12-0 FAU run over a two-minute span that brought them within 14 points.

But, that was as close as they would get, as the Herd shut the door on the comeback, ending the Owls season in the process.

After the game, Browning was quick to thank his teammates for his hot-shooting night.

“I’d like to thank my teammates for giving me the ball and giving me good looks,” Browning said. “Most of it wasn’t me.”

With his five three-pointers on the night, Browning moved into 18th place on the program’s all-time list, past Cornelius Jackson and Mark Doris, with 110.

With the win, Marshall advances to the Conference USA Quarterfinal round to face Old Dominion. Marshall split the season series with the Monarchs, winning the first meeting, 90-86 in double-overtime at the Cam Henderson Center, before falling at ODU in the team’s second matchup of the year. Browning did not play in the second meeting back on February 23.

A much quieter Marshall head coach Dan D’Antoni was quick to point out what to expect from Old Dominion in Thursday’s rubber match.

“Good team. Good coach. Totally different style,” said D’Antoni. “We need to try and stay tighter in the paint. We have our work cut out for us because we split during the season. Two different styles but we will see what happens.”

The Thundering Herd’s matchup with the Monarch tips-off Thursday at 9 pm ET and can be seen on the American Sports Network. A win in the quarterfinals puts Marshall in the C-USA semifinals for the second-straight season.