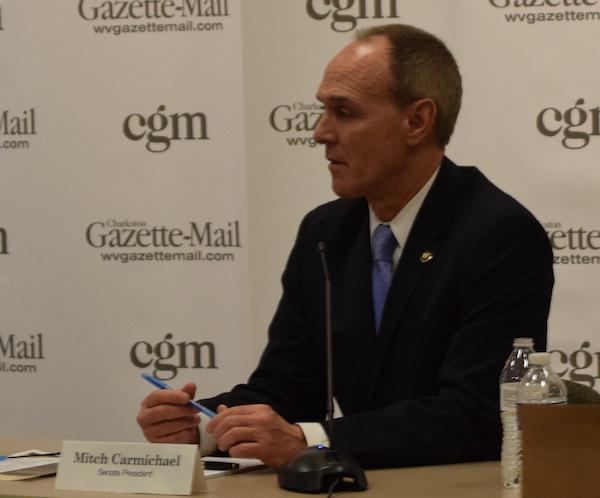 As with any other legislative session, this year has already brought forth questions about higher education, budget issues and the possibility of medical marijuana being legalized to help close the budget deficit left by the loss of most of the coal severance tax.

The Legislative Lookahead event on Feb. 3 featured panels to address these issues.

One of the biggest topics of the day, mentioned in almost every session, was the legalization of marijuana becoming an increased possibility. This follows the discussions from both the House and Senate during the special budget session last summer.

Del. Mike Pushkin, D-Kanawha, was at the center of this conversation in the previous session and was featured on the panel discussion about marijuana.

“It is already a multi-million dollar industry in West Virginia,” Pushkin said. “Currently we see absolutely zero revenue from it.”

John “Ed” Shemelya, national coordinator of National Marijuana Initiative, was also featured on this panel. He said that marijuana being legalized would only add to the issues currently being faced in the mountain state.

“This is a process that needs to go through the FDA,” Schemelya said. “We need to expand the research into cannabis. You’ve got serious problems in West Virginia. You don’t need to add another one to it.”

Eric Johnson of the Charleston Police Department said his concern comes from the fact that most states that have legalized medical marijuana see an increased push for the legalization of recreational use.

Danny Brag, a graduate student at Marshall and with the “Green is the New Black” initiative, said these states also give West Virginia the opportunity to learn from the mistakes of others.

“We have the opportunity to look at other states to see what works and what doesn’t to build legislation,” Brag said.

However, Senate president Mitch Carmichael, R-Jackson, said the legalization of marijuana stands “zero chance” of making it through the legislature.

The marijuana question stems from a potential $500 million-plus budget deficit that will have to be addressed in some way during the upcoming session.

Brian Lego, an economic forecaster with the West Virginia University Bureau of Business and Economic Research, said the state will have to prepare for coal to have a “smaller footprint” than ever before.

Carmichael said coal will not be as prominent as it has been in this state’s past.

Del. Eric Nelson, R-Kanawha and House Finance Committee chairman, said this lack of economic diversification in the state is what had led to the current economic problems.

Different solutions for the problem legislators will face were discussed during the panel.

“We could look at tourism as a source to produce revenue in the state,” said Sen. Mike Hall, R-Putnam and Senate Finance Committee chairman. “The legislature is looking more in the area of the consumption taxes than the income taxes.”

Ted Boettner, executive director of the West Virginia Center of Budget and Policy, said these consumption taxes could also be used to address health problems in the state.

“A soda tax offers an opportunity to not only bring in revenue, but also address the obesity problem in the state,” Boettner said.

Boettner said the solution to the budget problem should not come through cuts to higher education funding.

Carmichael said he does not see cuts to scholarship funding being on the table.

“The PROMISE Scholarship will stay,” Carmichael said. “The goal was to keep the best and brightest students in West Virginia.”

Marshall University President Jerome Gilbert said the university is anticipating budget cuts. Gilbert said he has personally seen the discouragement of students concerning the condition of the economy in West Virginia.