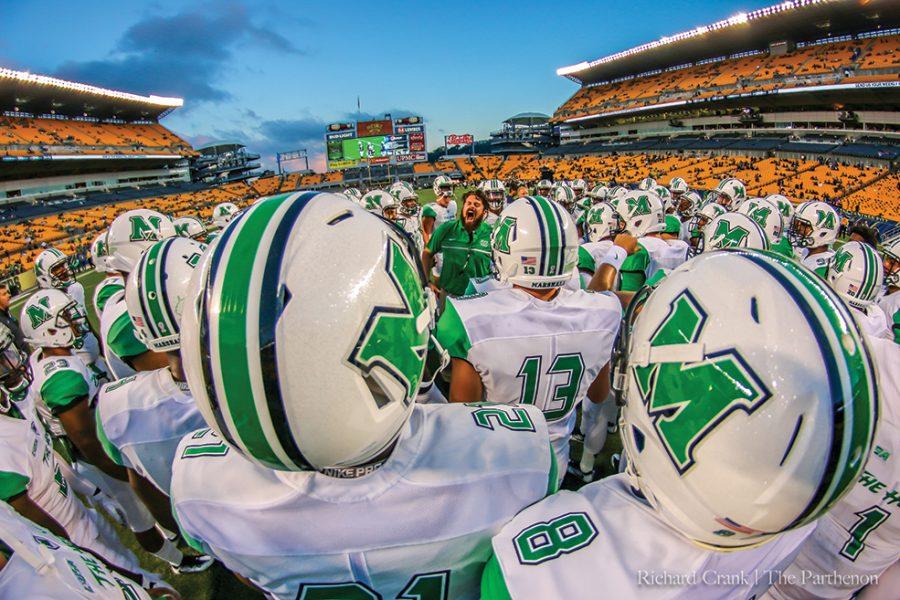 The Marshall football team takes the field ahead of their game with the Pittsburgh Panthers. Marshall ultimately lost the game 41-27, their second loss of the season to an ACC school.

Marshall opens their campaign Sept. 2 at home against Miami (OH). The Herd last faced off against the Mid-American Conference program in 2014, knocking them off in a 42-27 win in Oxford, Ohio. Overall, Miami (OH) leads the series 30-12-1.

The Herd also hit the road for a game with an Atlantic Coast Conference school for the second straight year, a showdown at North Carolina State awaiting them on Sept. 9. MU has not faced the Wolfpack since 1995, when the program was at the 1-AA level, losing all three meetings, including their last game in 1995. The game kicks-off a home-and-home series between the two schools, announced in 2014. NC State will return to Huntington in 2018.

Following a Sept. 23 bye-week, Marshall is back on the road to face-off against the Cincinnati Bearcats at the newly-renovated Nippert Stadium. It will be the first meeting between the schools since 2008, which Marshall lost 33-10 in Huntington. The Bearcats are expected to return to Joan C. Edwards Stadium in 2019.

After their road visit to Cincinnati, Marshall opens its Conference USA schedule away from home at Charlotte on Oct. 7, one of their four road league games this upcoming season. Big Green’s home C-USA schedule boasts Florida Atlantic on Oct. 28 and Southern Mississippi to close out the year on Nov. 25. Marshall also hosts Western Kentucky for the second-straight year, this time on Nov. 11, which will serve as the team’s memorial game for the 1970 plane crash.

Seven of Marshall’s 2017 opponents played in bowl games this past season, boasting a 72-80 combined overall record. They will also have to face-off against a bevy of new coaches in C-USA. Former-WKU head coach Jeff Brohm left for Purdue. Brohm was succeeded by longtime college assistant Mike Sanford, Jr. Florida Atlantic hired former-Alabama offensive coordinator Lane Kiffin to lead their program for the foreseeable future. Florida International also brought in a new head coach in Butch Davis, who guided the Miami Hurricanes’ domination of the late 90’s, from 1995-2000.

After a tough schedule last season that netted only three wins, head coach Doc Holliday is looking forward to the upcoming year.

“This is another schedule that will, once again, energize our student-athletes, coaches and fans,” Holliday said via a press release. “Our fans are second to none when it comes to supporting our program and we look forward to seeing them in Joan C. Edwards Stadium this fall.”

Times have not been announced yet for any of Marshall’s 12 games. All games at this time are scheduled to be played on Saturday, but Conference USA does remind all fans dates are subject to change to accommodate the national television schedule.