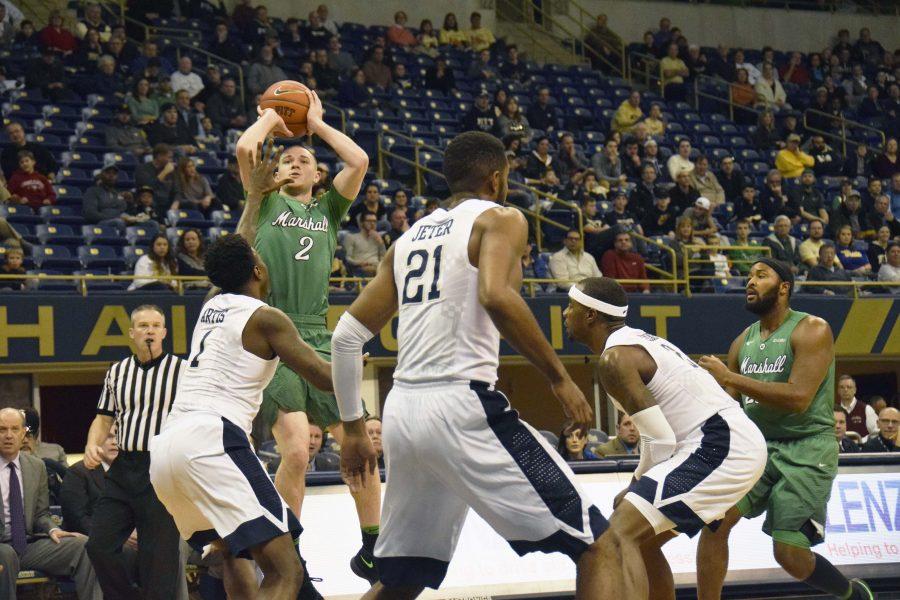 Marshall guard Stevie Browning (2) pulls up for a shot attempt over Pittsburgh guard Jamel Artis (1) in Wednesday's 112-106 loss to the Panthers.

They say it’s not how you start; rather, it’s how you finish. However, much as the Marshall Thundering Herd learned Wednesday night, how you start is pretty important, too.

Good starts are especially important on the road against teams like the Pittsburgh Panthers (11-2), who entered Wednesday with a sparkling .964 winning percentage at the Petersen Events Center.

Marshall (7-6) quickly found themselves in a 6-0 hole early after conceding back-to-back threes just minutes into the contest. Thanks to another three from guard Jamel Artis, the Panthers were able to grow their lead to double-digits less than five minutes into the first half. After sophomore CJ Burks checked into the game moments later, the guard knocked down a lone three-pointer, cutting the Pitt lead to 8, but that was as close as the Herd would get in the first half.

Behind 52 percent shooting from both the field and three, the Panthers pushed their lead to as many as 20 points, before taking a commanding lead of the same total into the locker room, 58-38. Artis led the Panthers with 17 first-half points.

The offensive woes continued well into the second half, as Marshall’s typically-prolific offense struggled to solve the hardnosed Pitt defense. On the other end, the Panthers scored at ease. Pitt opened the second half on a 19-11 run to push their 20-point halftime lead to 29, their largest lead of the game.

True to fashion, however, the Herd would not call it quits just yet. Midway through the second half, Marshall found itself still trailing by 23-points following a fast-break dunk by Pittsburgh forward Sheldon Jeter. On the ensuing possession, Marshall forward Austin Loop picked up an offensive board and found Ryan Taylor underneath for the layup to cut the lead to 21. While, in the moment, this may have seemed like points picked up in garbage time, inexplicably, the Herd flipped the switch from here on out.

Pittsburgh may have been the aggressors all game to this point, but over the next eight minutes, it was Marshall who took command of the game. The Herd went on a 37-19 run to cut the Panther lead to just 5 with 39 seconds to go.

Unfortunately for the Herd, it was too little, too late. Five points was as close as the Big Green would get to Pitt’s once-untouchable lead, as the Panther nailed clutch free throws down the stretch the ice the game, winning 112-106.

The loss marked Marshall’s sixth road loss of the season in as many games away from the friendly confines. Despite the valiant effort, head coach Dan D’Antoni was adamant the team needs to find a way to start winning away from home.

“We’ve won seven games at home, but none on the road,” D’Antoni said. “We’ve got to somehow pack that mentality in a suitcase and bring it with us on the road. We didn’t do that tonight. Hopefully we can bring it on the Florida trip.”

The Florida trip D’Antoni referenced is Marshall’s back-to-back games at FIU to open Conference-USA play on New Year’s Eve, followed by a Jan. 2 game at Florida Atlantic. The Herd won both meetings with the two schools last season. But, D’Antoni says his team still needs work in all phases of the game if they want to go far this season.

“All we’ve got to do is understand playing good is one part of the game,” D’Antoni said. “The other part is winning good. We don’t have that swagger yet.”

One area the Herd do showcase considerable prowess in is the three-point shooting game, converting around 40 percent of their attempts this season. In what has become a viral rant, D’Antoni defended his team’s quick-trigger mentality when questioned about Marshall’s lack of post presence.

“Do you watch the NBA ever?” D’Antoni asked. “Do you see those top three teams? Golden State, do they work it in? My brother [Mike] in Houston, do they work it in? You can go get any computer and run what the best shots are, and it will tell you that the post-up is the worst shot in basketball. If you want to run down and try to get it in there to shoot over somebody, then you’re beating analytics. The best shot in basketball is that corner three. The next best shot in basketball is any other three. Other than free throws, which we try to do, when you get to the foul line, you score 1.5 points every time you go to the foul line in the pros. It just trickles down. It’s the same thing for college kids. If you can get to a layup, and it’s not one that is highly contested, it’s 1.8 [points per attempt]. It’s 1.3 from that corner. You know what a post-up is, with a guy standing up over top of you? It’s .78.”

One of the major highlights of the contest was the performance of sophomore guard CJ Burks. After missing the first 10 games of the season due to academic ineligibility, Burks returned against West Virginia Wesleyan and hasn’t looked back since coming off the bench. Wednesday night, Burks recorded a career-high 25 points on 7-10 shooting, including five made three-pointers. D’Antoni was very high on Burks following the game.

“CJ Burks will be one of the best players in Conference USA this year,” D’Antoni said. He’s a quality player that could play on anybody’s team. He sat for a long time…but as far as speed, strength, shooting, with a lot of range, finishing at the rim extremely well, and he can defend you. You get on him and try to go around him, he’s a little bulldog. I see big things for him…he’s going to put the ball in the basket, and he can defend you too.”