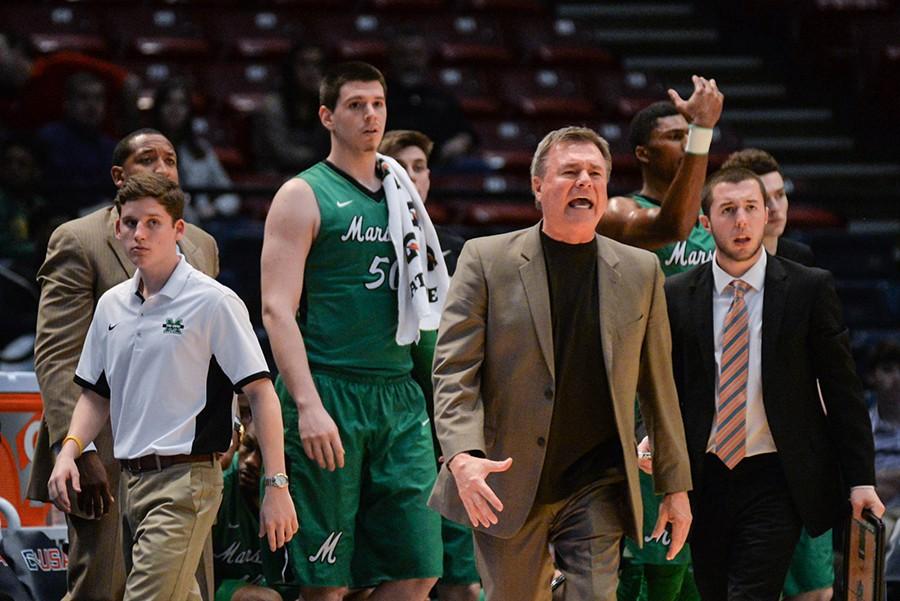 An irate Coach D'Antoni shouts over a call as the Herd takes on Middle Tennessee for the C-USA Men’s Basketball Semifinals in Birmingham, AL.

With their home non-conference schedule in the books, the Marshall men’s basketball team hits the road once again Thursday, this time for a showdown with the number 24-ranked Cincinnati Bearcats of the American Athletic Conference.

Marshall (7-4) has yet to face a ranked opponent this season, marking the first time since Dec. 27, 2015 that Marshall will face-off against a top-25 adversary. The Herd dropped that game to then-number four Maryland, 87-67. Under head coach Dan D’Antoni, the Thundering Herd are 0-5 against ranked teams, giving up 79.8 points-per-game in those contests.

While history may not be on the side of MU, players, such as Stevie Browning, are not letting that dash their hopes of an upset.

“This is a huge next couple of games,” Browning said. “Cincinnati is ranked in the top-25…We lost at Ohio State, but I think we are a lot better team than we were then…I think at full strength I would think that we can surprise them. It wouldn’t be a surprise to us, but to the rest of the country it would. I think we’re capable of it.”

As it stands currently, the Herd may have to enter Fifth-Third Bank Arena undermanned. Senior forward Ryan Taylor has sat the past two games with a calf injury, while junior center Terrence Thompson has missed the entire month of December so far with an abdominal injury. Following the Herd’s 81-65 win over West Virginia Wesleyan, head coach Dan D’Antoni was still unsure of either’s status moving forward.

“I looked at Ryan’s leg and he had a lot of swelling in his calf,” D’Antoni said. “He said he feels better and is pretty sure he’ll go against Cincinnati. With Terrence with the stomach muscle, we thought he was going to be back in two weeks…we’ll just have to wait and see, week-to-week.”

The losses of Taylor and Thompson are compounded by the fact that Marshall is already a small team. The Herd’s tallest player is 6’9 forward Milan Mijovic, while Thompson is 6’7 and Taylor is 6’5, meaning Marshall needs all the height they can get. However, the Herd seemingly matchup well with the Bearcats (9-2) height-wise, as Cincinnati’s tallest player is 6’9 junior forward Kyle Washington.

Much like the athletic big men of Ohio State, though, UC’s post-players could present a number of challenges for the Herd in the painted area. The Bearcats boast one of the better duo’s in the NCAA, comprised of the aforementioned Washington and sophomore swingman Jacob Evans. Washington enters Thursday’s meeting averaging 15.0 points-per-game, while shooting a robust 58 percent from the field. Evans, a preseason Jerry West Shooting Guard of the Year award selection, leads Cincinnati’s with a 15.1 points-per-game average. The Bearcats enter Thursday averaging 83.9 points-per-game as a team.

While the Bearcats may be gifted offensively, it is no secret that the Thundering Herd are one of the top scoring teams in the nation under D’Antoni. The Herd walk into Fifth-Third Bank Arena with the 16th-ranked scoring offense in the NCAA, at 86.2 point-per-game. Cincinnati head coach Mick Cronin acknowledged the Herd will be hard to stop.

“They make 9.8 threes per game,” Cronin said. “It’s not a lot when you factor in they score 88 points, so they’re scoring only 27 or 30 points from the three-point line. They get a lot of layups because they spread the floor well because of their shooting and passing…they can just score.”

Marshall is no stranger to Cincinnati. This will be the 33rd all-time meeting between the two schools, with the Bearcats leading the series 20-12. However, the last time the programs met, Marshall came out on top in a 73-69 win back on Nov. 25, 2011.

Thursday’s game tips off at 7 p.m. and can be seen on CBS Sports Network.