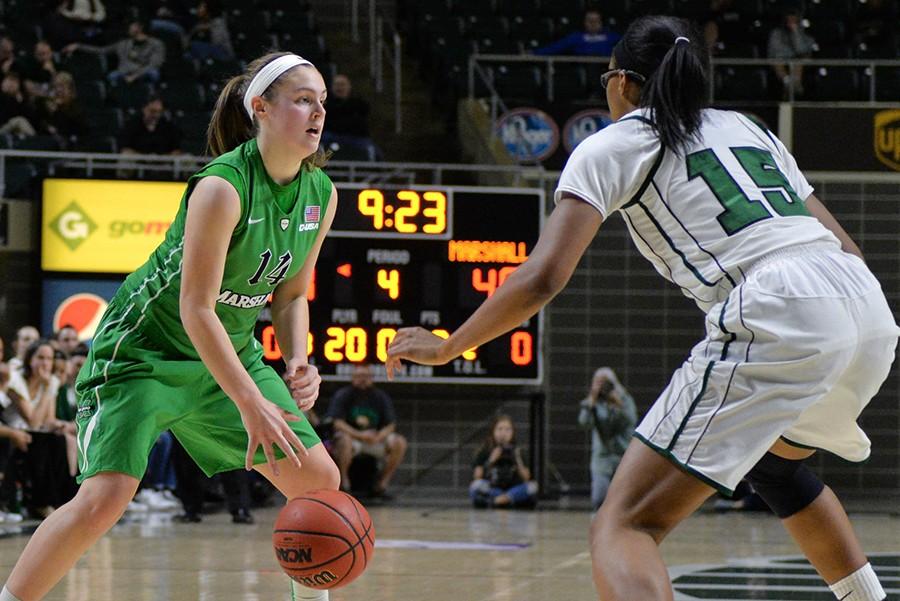 Marshall’s Shayna Gore dribbles as the Herd take on the Ohio University Bobcats in the postseason WNIT game in Athens, Ohio.

In what was their final tune up before Conference USA play, the Marshall Thundering Herd women’s basketball team welcomed the Maine Fort Kent Bengals into the friendly confines of the Cam Henderson Center Tuesday afternoon, winning handedly and breaking records in the process.

From the moment the first whistle blew, the final result was never in doubt.

Marshall stormed out to a 13-2 lead less than halfway through the first quarter. The Herd ultimately grew that lead thanks to a 16-9 run, pushing the deficit to 29-11 with two minutes left to play in the opening frame. Marshall’s defense locked down over those final two minutes, not allowing a field goal the remainder of the quarter and held Maine Fort Kent to just 28 percent shooting in the quarter.

The second quarter was more of the same for head coach Matt Daniel’s team. The Thundering Herd inflated their to lead to as high as 60-17 with four minutes left in the half, before the Bengals ultimately eclipsed the 20-point mark thanks to a deep three-pointer from guard Tierra Wilks. But, Marshall’s defense again proved to be too strong as the Herd only allowed nine more points before the end of the half, taking a 71-29 lead into the locker room.

Breakout star forward Ashley Saintigene made her presence felt in the latter part of the first half, totaling a team-high eight points on 4-4 shooting, as well as grabbing three rebound, two of which were offensive boards. The Herd also continued to ride the hot-hand of guard Shayna Gore, who poured in eight of her 25 total points in the second quarter, finishing perfect from three-point territory.

MU continued to pour it on in the second half, outscoring the Bengals 33-20 in the third quarter alone thanks to major contributions from their bench players. The Herd bench outscored Maine Fort Kent’s 18-3 in the third period. Marshall also continued to assert its dominance in the painted-area, outscoring the Bengals 16-6 in the post, as well as hauling in 16 rebounds, eight offensive boards that resulted in 11 second-chance points for the Lady Thundering Herd.

As the third quarter came to a close, the Herd found themselves up 104-49, the game well out-of-reach. Unfortunately for the visitors, the scoring barrage would continue in the final quarter, as Marshall held the Bengals to just 13 points in the fourth period en route to a 136-62 victory, the Herd’s 9th win of the season.

Following the game, the talk was all about Daniel’s team making history. Marshall’s 136 points broke a two-year old C-USA scoring record of 127 points, a mark also set by the Lady Herd against Brescia on Dec. 22, 2014. The point total also set a new single game school-record for points, eclipsing the men’s basketball team’s long-standing record of 131 points against Old Dominion on Feb. 27, 1968, a game that featured now-head coach Dan D’Antoni. Besides the historical significance of the win, Daniel was pleased with his team’s performance.

“We shared the ball really well,” Daniel said. “I’m really pleased with the energy and focus we had today. I’m impressed that we never pressed. It’s not like we pressed to score this much. We just took what they gave us. We were pretty good that way.”

As a team, Marshall assisted on 26 of 55 made baskets. The Herd also turned the ball over just eight total times, something Daniel took notice of.

“That’s the way we need to play,” Daniel said. “I don’t care who the opponent is. I don’t care if it’s North Carolina, where we laid an egg, or if it’s against the 11-1 Maine Fort Kent team that we faced today. We need to play that style of basketball no matter who we are playing and no matter what the score is. That needs to be us.”

With the win, Marshall improves to 9-3 on the season. The Herd will have 10 days of rest before returning home on Dec. 30 to open the conference portion of their schedule against Florida International. The game tips-off at 6 p.m.