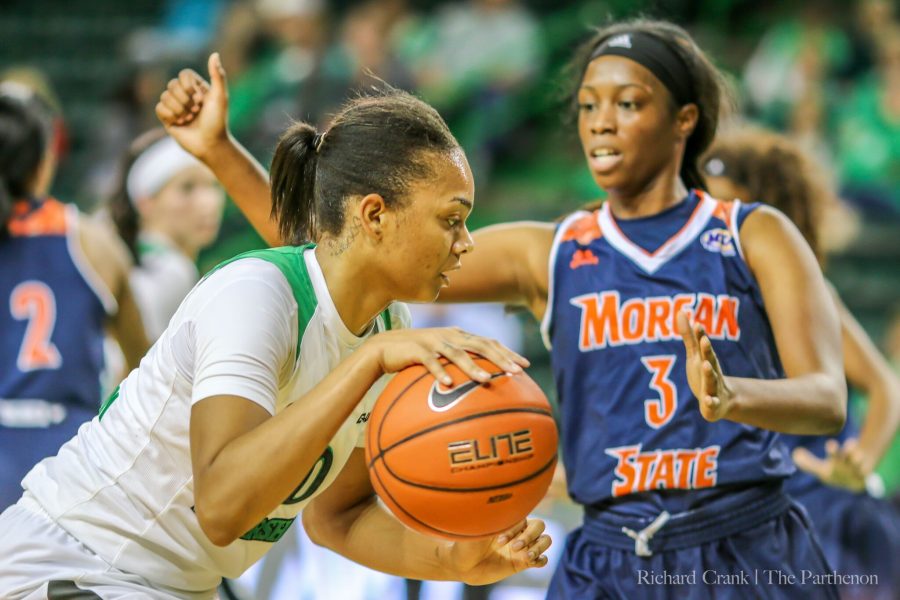 Marshall forward Talequia Hamilton (0) drives to the basket in a 62-43 win over Morgan State.

Talequia Hamilton has had a basketball career more akin to an Oscar winning film than anything most NCAA players experience in their life.

Hamilton, born and raised in the shadow of Marshall, first caught the eye of locals just a few miles away at Huntington High School. Huntington High, known for producing NBA players like O.J. Mayo and Patrick Patterson, was where Hamilton evolved into a dominant force on the court.

Hamilton received no attention her freshman year, but when she started playing heavy minutes her sophomore year, she quickly earned it. As a sophomore, Hamilton was named second team all-state. During her junior year saw her be named first team all-state, while also averaging a double-double and leading the Highlanders to the state semifinals. During her final year at Huntington High School, she was named first team all-state again, while also being awarded conference player of the year. She would leave her high school averaging 19 points-per-game, earning a scholarship to NCAA basketball powerhouse University of Cincinnati.

Like all Hollywood movies, just when everything seemed perfect, adversity reared its ugly head. Hamilton patiently waited for her opportunity her freshman season, appearing in 16 games and showing the potential that earned her a scholarship. Hamilton went into her sophomore season earning the opportunity she had been waiting for in Cincinnati’s season opener against Northern Kentucky. Talequia suffered a season ending injury that not only altered her plans for the season, but for her basketball career and life as a whole.

Hamilton found herself missing the family and hometown she had grown up with, and made the decision to transfer to Marshall at the end of 2012.

“Huntington is home for me,” Hamilton said. “I went to high school here, my families here, this has always been home and I just really wanted to come back. Everybody knows me here, I’m always just surrounded by love constantly.”

Due to NCAA transfer regulations Hamilton would have to sit out the entirety of her junior year for returning to the town she had left. As she once again patiently waited for her opportunity to play the game she loved, life handed Hamilton another change in her plans.

Hamilton was gifted with a son before the start of the 2014 basketball season. She put her basketball career on hold and her family above all else, sitting out the 2014 season to raise her child.

“Sitting out did have some advantages,” Hamilton said. “I got to see how the game was played from every position. Obviously not being able to play sucked but at least I learned something.”

After three straight years of no basketball, Hamilton finally got her chance to get back on the court this season and has taken advantage. Hamilton has started all 8 games this season and finds herself with big shoes to fill with the loss of forward Leah Scott.

Scott was the first player in Marshall history to earn C-USA player of the week twice in a season, and was considered by many the best player on the team.

“It was hard replacing Leah,” Hamilton said. “She was a huge part of our offense and defense last year, replacing her numbers was a challenge. 8 games in though I feel like I’m really starting to get it and fill her role.”

Hamilton has filled her shoes and then some so far. She leads the starting line up with a 52 percent shooting clip, and finds herself with the second most blocks and steals on the team. She also has the third most rebounds on the team, and has earned quite the reputation on the defensive side of the ball. Her best offensive performance since her return came against Florida A&M in the second game of the season. Hamilton dominated in the paint scoring a team-high 26 points and leading the Herd to a 10-point victory.

Marshall head coach Matt Daniel sees Hamilton as an asset to the team on and off the floor.

“The first thing Talequia brings to the team is experience,” Daniel said. “when her energy is good the whole team benefits. There is a pretty direct correlation that when our energy is up individually or collectively our team’s performance is certainly better.”

Such a strange career can only come to an end in the same way. Marshall is currently preparing to petition the NCAA to give Hamilton what is essentially another senior year due to the extenuating circumstances experienced in her collegiate career. The NCAA does have a history of granting an extra year of eligibility for special circumstances. Current NFL quarterback Case Keenum is one of the more recognizable names to have earned a 6th year.

Coach Daniel is not sure if the NCAA will grant Talequia another year, but remains hopeful.

“Talequia has been great,” Hamilton said. “She has been through a lot of stuff. She’s had the injuries and she has her son in her life, we are getting everything together for the appeal process and we are hoping for some good news.”

Another season would mean the world to Hamilton, who said of the possible opportunity

“I don’t even have the words to describe how I would feel,” Hamilton said. “I would be ecstatic”.

While Talequia Hamilton has only played 8 games in the entirety of her career at Marshall so far, she sacrificed a lot of playing time for the opportunity. Whether Hamilton this ends up being her final year for the Herd or not, there is no doubt she has had a positive impact on the program and represented the university she returned to the best of her ability.