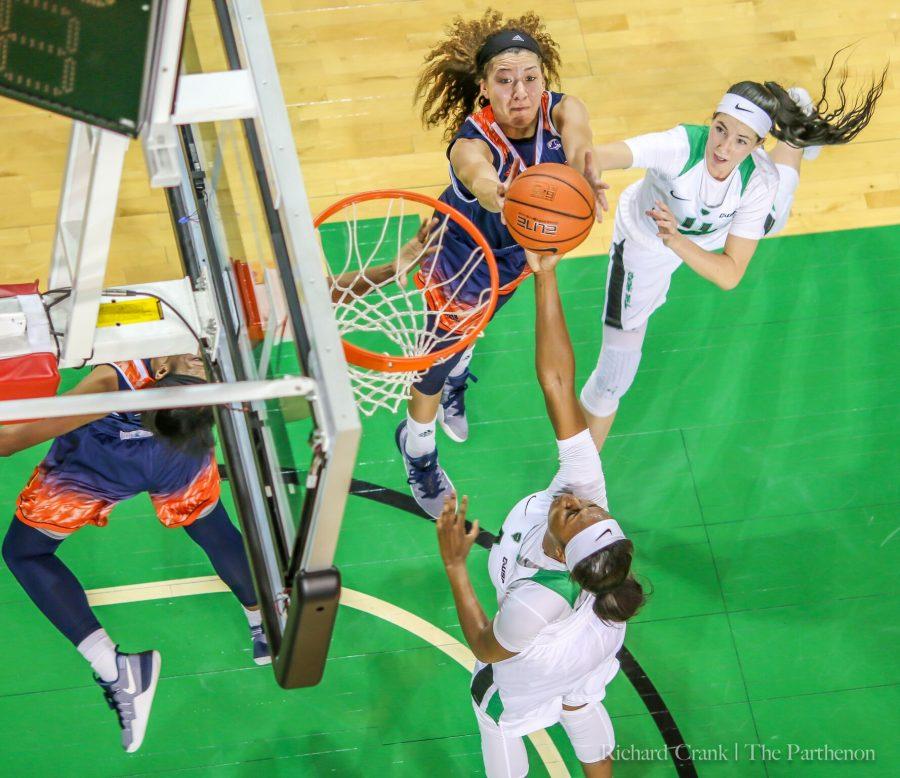 Marshall guard Taylor Porter (top) and Khadaijai Brooks (bottom) go up for a rebound against Morgan State on November 30. The Herd won 62-43.

Back at home for the first time in two games, the Marshall women’s basketball team did everything it needed to do and then some in their 77-35 drubbing of the visiting Bluefield College Rams.

It was a wire-to-wire victory for the Herd, who dominated the entirety of the first half, only allowing the visitors to register a mere 10 points after 20 minutes of action.

Marshall came out fast from the opening tip, taking a commanding 12-4 lead with just under five minutes left to play in the first quarter. The Herd would close the quarter out on a 10-0 run to push their lead to 22-4 heading into the second quarter. The domination would continue in the next frame.

The Rams would finally get back on the board some three minutes into the second quarter, cutting the lead to 32-5 thanks to guard Valerie Lebedeva’s made free throw. A layup from Emily Hart followed by a three-pointer from Danae Cox would help Bluefield break the double-digit mark with four minutes left in the half, but that was the last time the Rams would put the ball through the basket, as Marshall’s defense locked down, again closing the quarter on a 10-0 run to take a 45-10 lead into halftime.

From there, the outcome was a forgone conclusion, as Marshall eventually took home the 35-point victory. The Herd lead by as many as 44 points in the game, but head coach Matt Daniel was not satisfied with the dominating performance from his team.

“We have to figure out a way to play good basketball consistently,” Daniel said. “Every day. Not just on game day, not just for a quarter or a half or three quarters. We just have to be better.”

Despite their early struggles, the Herd put in one of their best shooting performances of the season, finishing the game shooting a hair under 53 percent. Marshall opened the game shooting 60 percent in the first quarter alone. The Herd also finished shooting 37 percent from three. Marshall also finished with five players scoring double-figures, led by guard Shayna Gore, who poured in 18. Gore said it was her teammate’s energy that helped her.

“I was just feeding off everyone else,” Gore said. “We had good ball movement, we played good defense in the first half. We were stealing the ball and would get loose for open layups.”

With the win, Marshall snaps its two-game losing streak, improving to 6-3 in the process. The Herd will have eight days off before their next contest, a home meeting with Longwood. Daniel made it known he’s glad to have the extra time off.

“We’ve got a little break here, for eight days,” Daniel said. “We don’t have a game, so we’ll practice and get focused while they’re here in their finals week.”