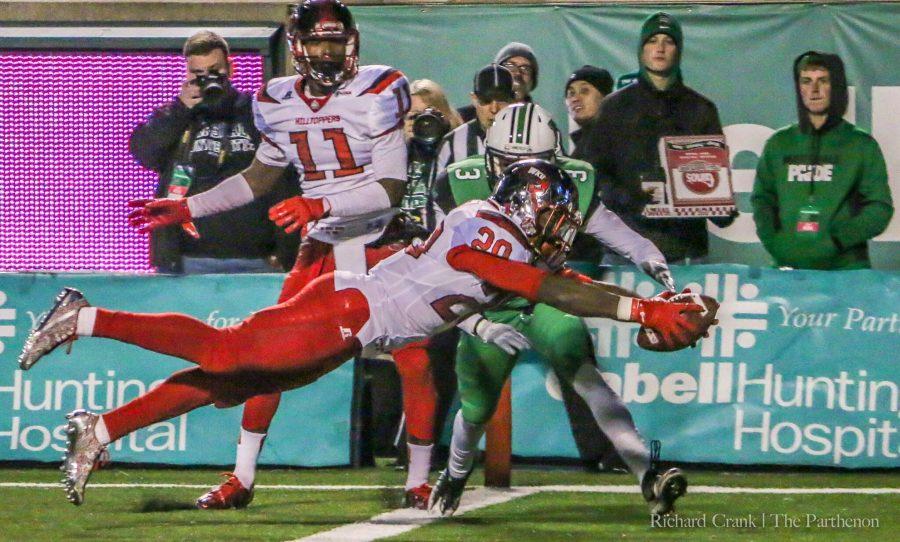 Western Kentucky running back Anthony Wales dives for the end zone in Saturday's lopsided 60-6 loss to the Hilltoppers. The loss is the worst home loss in Joan C. Edwards stadium history.

They came. They saw. They conquered.

That’s the easiest way to sum up Western Kentucky’s 60-6 thumping of the Marshall Thundering Herd Saturday night. With no hope of making a bowl game, Saturday’s contest was the team’s last of the season, a chance to finish strong on national television and against their rivals.

Marshall failed to accomplish either of those things.

The win was a wire-to-wire one for WKU, as the Hilltoppers came out like gangbusters, with Kylen Towner taking the opening kickoff back 93 yards for a touchdown some 14 seconds in. Less than four minutes later, Western Kentucky would add to their lead, thanks to a 21-yard touchdown pass from junior quarterback Mike White to senior wide receiver Taywan Taylor.

The first quarter continued to spiral out of control for Marshall, as the defense conceded another score four minutes later, this time a 19-yard run from redshirt senior tailback Anthony Wales, making the score 21-0. WKU would add another touchdown before the opening quarter was over, as well as two field goals from Skyler Simcox and another touchdown from White in the second, taking a 41-0 lead into halftime.

The lone bright spot for Marshall was the play of backup quarterback Garet Morrell, who started just his second career game Saturday night. Starting quarterback Chase Litton was ruled out of the contest just minutes prior to the opening kick-off with an undisclosed injury.

While the offense had very little production against the front-seven of Western Kentucky, Morrell looked comfortable at the helm, rolling out and extending plays when needed. The freshman finished the game 19 for 35 with 143 yards passing and one touchdown pass, where he led the team on a great drive down the field.

With just two minutes remaining in the 3rd quarter and the Herd facing a goal-to-go situation, Morrell dropped back and floated one toward the end zone, finding tight end Ryan Yurachek for the four-yard score.

That touchdown proved to be the only score Marshall could muster, as the Herd dropped their 9th game of the season. Despite running 13 more plays than the Hilltoppers and holding the ball 19 minutes longer, Marshall relinquished 462 yards of total offense and allowed Western Kentucky to score on all six redzone chances. Head coach Doc Holliday expressed his dismay with the team’s performance following the game.

“Obviously, there’s not a whole lot to be said,” Holliday said. “We are not a good football team. We did not meet the expectations and standards that should be met around here this year.”

With the loss, Marshall records their first losing record at home in Joan C. Edwards stadium history. Holliday says the team will get back to work immediately in order to avoid a repeat of this season.

“We’ll get back to work tomorrow and work to make sure this never happens again,” Holliday said. “That’s all I’ve got at this point.”

Quarterback Garet Morrell was equally upset with the performance.

“Slow start. Out of rhythm. Just couldn’t get on it,” Morrell said. “As a team, we know what we have to work on, what we have to do. All we can do is go forward from here.”

Despite Marshall not playing up to its standards, Hilltoppers head coach Jeff Brohm still considered this one of WKU’s biggest games of the year.

“It was very important for us to come ready to play and we definitely did that,” Brohm said. “Our guys came ready and practiced well. We started out with a bang. We understood the importance of the game. We had to win to advance and our guys definitely did that.”

With the season now over, the focus shifts to the offseason and preparation for next year. Marshall coaches and staff will have to go back to the drawing board in order to avoid another letdown season.